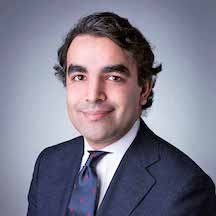 Hussein Banai is a professor at Indiana University in the Hamilton Lugar School of Global and International Studies. His work is grounded in the oral history of Iranian and American scholars and journalists who are witnesses of complicated US-Iran diplomacy. Currently, Banai is working on a book about liberal political thought in modern Iran.

Professor Huss Banai is an expert on the US - Iran relations and shared his perspectives on the disruptions of diplomatic ties between the two nations during the Trump administration. His presentation Trump vs. Iran: Game of Rogues depicted Iran as a rising regional power in the Middle East, with a particular emphasis on the limited material capabilities of the country to succeed in a long confrontation with a Global North country such as the United States.

Huss Banai, professor at Indiana University in the Hamilton Lugar School of Global and International Studies, expressed that Trump’s foreign policy does not seem to follow a clear pathway in International Relations, but the actions between August and September of 2019 seem to be in direct contradiction to former President Obama’s administrative decisions.

For Banai, allowing Iran to rise as a regional leader means maintaining the political stability of a regime that restricts civil liberties and lacks a focus on Human Rights, which primarily impact the Iranian community under the regime and secondarily normalizes the restriction of freedom in the politics of the region.

The Oxy community met Prof. Banai with great expectations in the McKinnon Center Forum and welcomed back a former professor curious about his new career paths. To the delight of his audience, Prof. Banai expressed his joy of visiting Oxy and meeting with colleagues from the Diplomacy and World Affairs department.

Furthermore, Prof. Banai was one of the organizers of the Cross-cutting Human Rights Workshop that brought scholars from all over the world to Occidental College on September 26 and 27.