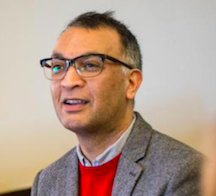 On Thursday, September 26, 2019, Dr. Momin Rahman, a professor of sociology at Trent University, lectured students on Queer Muslim Challenges to the Understanding of LGBT Rights: decolonizing human rights through intersectionality. In his talk, Professor Rahman identified issues that the queer Muslim community faces and offered solutions to empower the community.

Professor Rahman began by providing context for his lecture through the current debate about the inclusion of LGBTQ+ relations in sexual education in the United Kingdom, Canada, and other parts of the world). While some Muslim communites have voiced opposition to the inclusive education, this is not the perspective of all Muslims. Professor Raman explained that the media’s focus on Muslim opposition perpetuates the assumption of Muslims as anti-progressive and inherently assumes that LGBTQ Muslims do not exist. Professor Rahman then went on to explain how those assumptions exist by introducing three key problems to the reallization of queer Muslim identity: orientalism, universalism, and homo-postcolonialsim. The first two issues stem from a western-centric perspective. Professor Rahman asserted that Orientalism manifests as the deployment of LGBTIQ rights and culture with an Orientalist global culture by the west while universalism is the global spread of western LGBTIQ culture as exceptional. The final issue Professor Rahman pointed to was homo-postcolonialism, which he defines as the rejection of LGBTIQ culture and Muslim homophobia as “technology” of assertive postcolonialsm autonomy.

Professor Rahman interviewed a number of queer-identifying Muslims and from used their  experieneces observed serveral themes: (1) an attempt to individually reinterpret religious texts, (2) the existence of homophobia within families, (3) the concept of public queerness and “coming out as a western ideal, (4) experiencing racism and islamophobia, and finally, (5) the feeling of a lack of community for LGBTIQ Muslims. To combat the problems he identified along with the negative shared experiences that arose from the interviews, Professor Rahman proposed three key solutions. He emphaziesd the importance of queer Muslim autonomy. He urged allies to support the capacity for LGBTIQ Muslims to decide what their identity means and how it manifests. Professor Rahman then spoke of the necessity to decolonize knowledge. One must recognize that most assumptions about identity and culture are shaped by western ideals. Finally, Professor Rahman noted that there should be an intersectional understanding of othering. By not only pointing out problems with the status quo, but ending his talk with actionable solutions and goals to work towards, Professor Rahman displayed hope for the future with respect to the acceptance of queer Muslims.