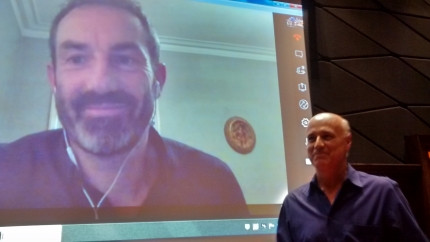 "Sexualities, Genders, and Human Rights: Intersecting Histories," the morning session of the conference, began bright and early, in the Harry Potter-esque Braun room of the library. Gruskin, Miller, Fried, Rothschild, and Satterthwaite sat together on a panel. While the event’s intention was to have each field questions from moderators Anthony Chase and Laura Ferguson, the conversation flowed easily between the old friends. The panelists recounted how they met and became involved in campaigning Amnesty International to recognize LGBT (initially just lesbian and gay) rights as human rights. As a college intern, Satterthwaite was struck by the injustice of AI’s policy to advocate for those imprisoned for LGBT advocacy but ignore those imprisoned for simply being LGBT. She wrote a resolution proposing change, and began working with other human rights professions and lawyers such as Miller. The group ultimately succeeded in changing official Amnesty International policy to include sexual orientation in the larger conversation about human rights. As Miller put it, the goal of human rights is to "challenge how society puts someone in a hierarchy." While LGBT rights are no longer on the radical front of human rights issues, abuses continue across the world, including in 75 countries that still criminalize homosexuality. Adding to this conversation is the new ‘radical front’ of advocacy: sex workers. Much like LGBT advocacy, this issue challenges NGOs such as AI to once again include marginalized group in human rights dialogue despite a perceived threat of losing ‘respectability’ by protecting victims that are not ‘politically safe.’ Human Rights discourse continues to evolve; while institutional change inherently involves compromising to make ideals a reality, as Rothschild put it, "silence is unacceptable."

Next came the mid-day session: "Sustainable Change: Institutions, Law, and Movements in the Advancement of Sexual Orientation and Gender-related Rights," a Cultural Studies Program Lecture in Thorne Hall. Freshmen, upperclassmen, community members, faculty, and administration alike sat in the audience looking onto a panel consisting of Miller, Satterthwaite, and Rothschild (sitting from left to right). At the far left sat moderator Chase, looking the part of a "talk show host," as he was introduced by Associate Dean for Core Curriculum, John Swift. Professor Chase opened by placing the college’s theme into many contexts like biology, development, environment, politics, law, and institutions, narrowing in on the discussion’s focus: sustainability relating to sexual orientation and gender-related rights. Rothschild spoke first about her role with Amnesty International, working with other speakers of the day, about the challenges of a political project within an international bureaucratic theater. Further, she spoke of the challenges of changing the ideas, thought, and legitimacy of an international NGO such as AI; this is particularly difficult when new generations join the movement and it becomes difficult to control a specific message. To conclude, she stated that in order to create sustainable change within the human rights field, it is important to rest on human rights truths. She conceded that they can be ugly, but are necessary in pushing institutions to take on social justice issues and change. Satterthwaite followed, explaining legal systems that operate on many scales and their evolution around the idea of "love as a basic human right." Moreover, she outlined human rights law with respect to the United Nations, explaining the complexity of two separate treaties that support fluid and intersectional rights. Her story was about the progress and backlash of cases throughout the past 35 years. Miller wrapped up by providing an academic perspective arguing the role of "mess-making" as an imperative dimension in the growth and process of sustaining human rights. The three speakers comprehensively analyzed their work with human rights within the forum of institutions and it was not until a student asked a question about working outside of institutions to make change that it seemed as though such work could be successful. Each of the panelists responded with encouragement to do what motivates you and envision what matters and fill those gaps.

A long day closed with the final event: "The Sustainable Development Goals, Gender, and Human Rights," a discussion about human rights and development. Due to visa issues, Ignacio Saiz unfortunately was not able to make it to campus, but graciously participated via satellite in the late hours London time. Saiz summarized what the Sustainable Development Goals are and why they matter. He also discussed what challenges the UN faces with regards to human rights in achieving each of the 17 goals, like the fact that the agenda is "not transformative." He concluded by arguing some achievements and learned lessons from drafting a new set of development goals, improved from the now obsolete Millennium Development Goals that expired earlier this year. The second panelist, Fried, spoke of her work with UNDP and related the new SDG to gender and sexuality. She finished her lecture conceding the UN is a "difficult" forum to use as a driver of change because of its bureaucratic structure, but that change can be made when the primary focus is thought about who has to be included.

Events like these, provided by determined faculty and generous donations, offer students and community members alike the opportunity to engage in new and inspiring discussions about impactful global issues. Each of the panelists’ unique stories, perspectives, and work provided comprehensive examination of the intersection of sexual orientation, gender, and human rights in the fields of history, sustainability, and development.

Click here to watch the panel on "Sustainable Change: Institutions, Law, & Movements in the Advancement of Sexual Orientation and Gender-Related Rights"

Click here to watch the panel on "Sexualities, Genders, and Rights: Intersecting Histories"