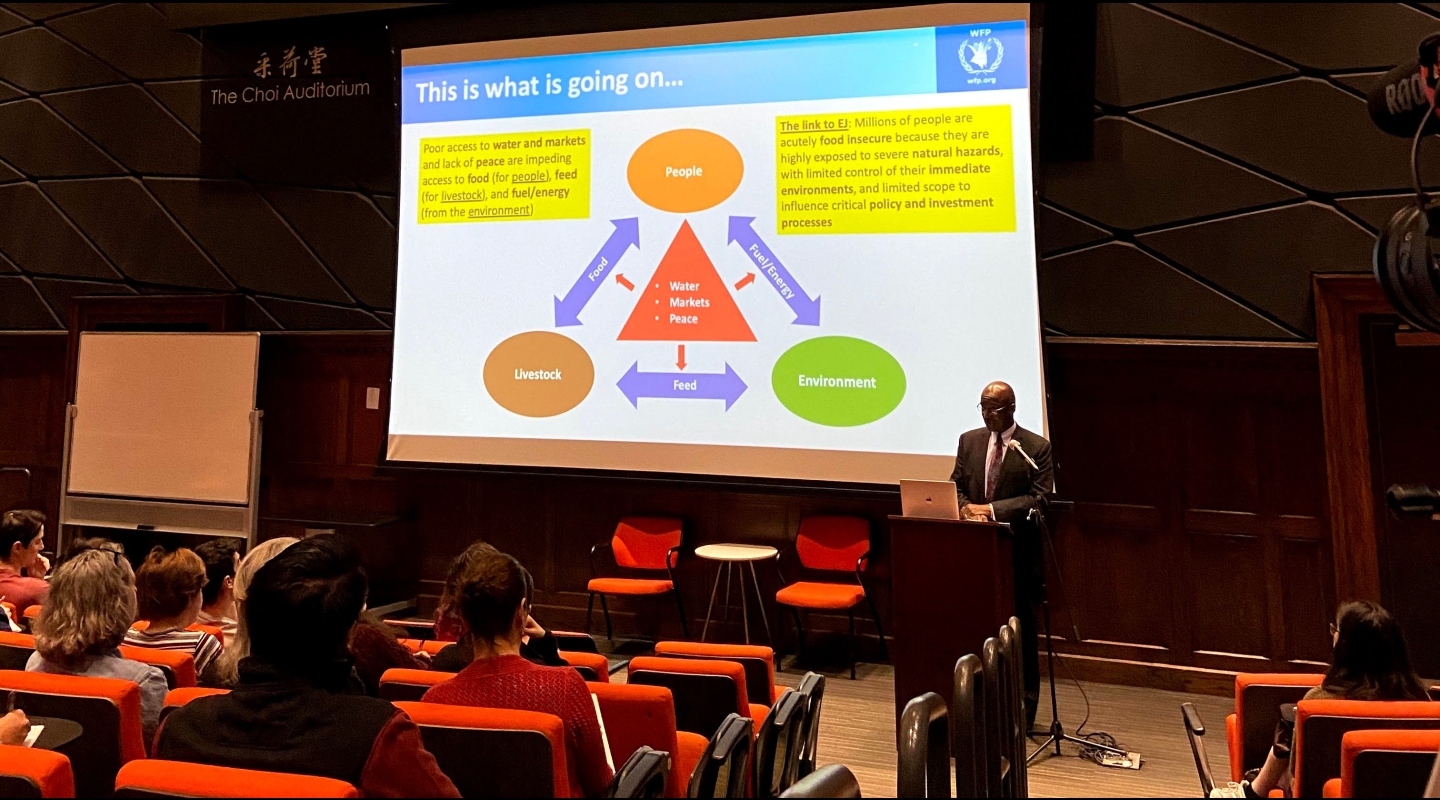 On Thursday, February 13th, the Oxy UN Week Keynote speaker, Dr. Steven Were Omamo, explained his work on food insecurity in Ethiophia in connection to environmental justice and climate change.

Dr. Steven Were Omamo is the Representative and Country Director for Ethiopia at the UN World Food Programme, as well as the father of Oxy sophomore Clara Richardson-Omamo. After an introduction from his daughter, Dr. Omamo began his talk by showing a series of photos he had taken in Ethiopia alongside the question: “What is good and/or bad about these photos?” The photos depicted varying issues in different communities around the world: natural hazards, food and water insecurity, insufficient feed for livestock, and more. Throughout his talk, Dr. Omamo emphasized the significant impact water security can have in improving a country’s overall development. He used Ethiopia as an example. Despite the country’s high GDP growth, Ethiopia also has high unemployment. The landlocked state’s crop success is dependent on water. Uncontrollable factors like erratic rainfall can significantly cripple harvest seasons. Dr. Omamo made the point that vulnerability to food insecurity is heavily determined by the accessibility of water; Ethiopia is simply one of countless examples of this assertion.

Dr. Omamo explained that state security and water security are two of the largest influences in a country’s stability. He provided a number of studies that demonstrate a strong correlation between water security and reduction in different indicators of poverty. Communities with dependable water access are less likely to fall victim to corruption and violence. Dr. Omamo also noted that the greater the underlying vulnerability to food insecurity a community faces, the more potent the impact aid can have. This means that policies and investments will have the greatest impact for the most vulnerable populations. Dr. Omamo emphasized the importance of water management and control (as opposed to one-time projects),community-based humanitarian food assistance, and money transfers in developing and maintaining food and water security.

At the end of his talk, Dr. Omamo circled back to his Ethiopia example. He posed the question: What if vulnerable people had secure access to and control of water and generally lived in peace? In the case of Ethiopia, the state’s humanitarian requirements would decrease by 22 percent, reiterating the claim that water security significantly affects a country’s stability.