Oxy at the United Nations 2019 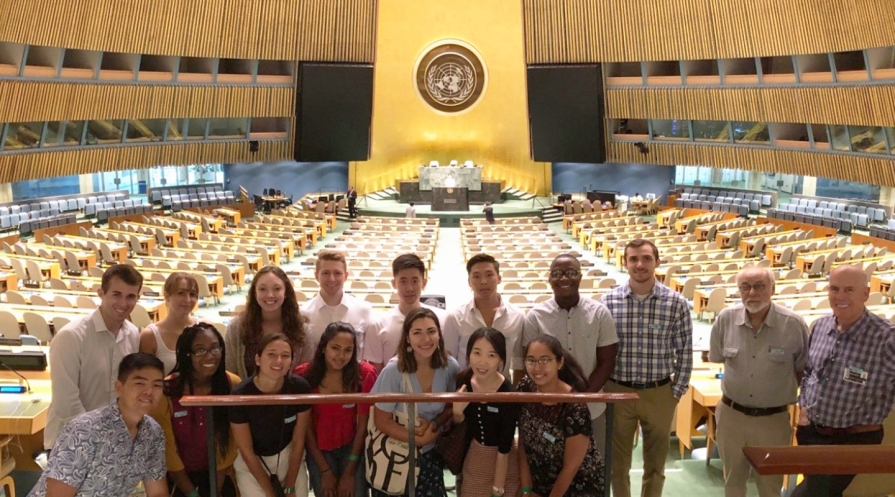 Each fall a select group of Oxy students are awarded the opportunity to move to New York City and intern full time at the United Nations. Throughout the semester we will be sharing their updates as they navigate their roles working with various UN agencies.

The G-15 (2019 cohort of 15 students in the Kahane UN Program) arrived in New York on Wednesday, August 28th, 2019 with a mix of excitement and anxiety over what the future holds for them. Settling in New York and the 92 Y – where we will be living for the next three months, we had the chance to explore the lengths and breadths of Manhattan and figure out how New York’s notoriously confusing subway system works. On our first day, we were greeted by the program director – Prof. Douglas Gardner for a brief session of introductions and program details in a communal dining setting at the 92 Y. We also got to share our individual and collective goals during our time in New York and at the United Nations.

On our second day, we toured some of the iconic spaces within the United Nations (UN) including the historic UN General Assembly. We were also briefed on the three pillars of the UN – maintaining international peace and security, promoting sustainable development, and protecting human rights – and the efforts of the UN in maintaining and enforcing these pillars around the world. Thought-provoking quotes like “The UN was not created to take mankind to heaven, but to save humanity from hell” and statistics littered the walls of the UN building which kept reminding us of the need to strive for a more peaceful and just world. We were also reminded of the need to support the UN in its goodwill and causes around the world, regardless of its imperfections, through global action and advocacy. 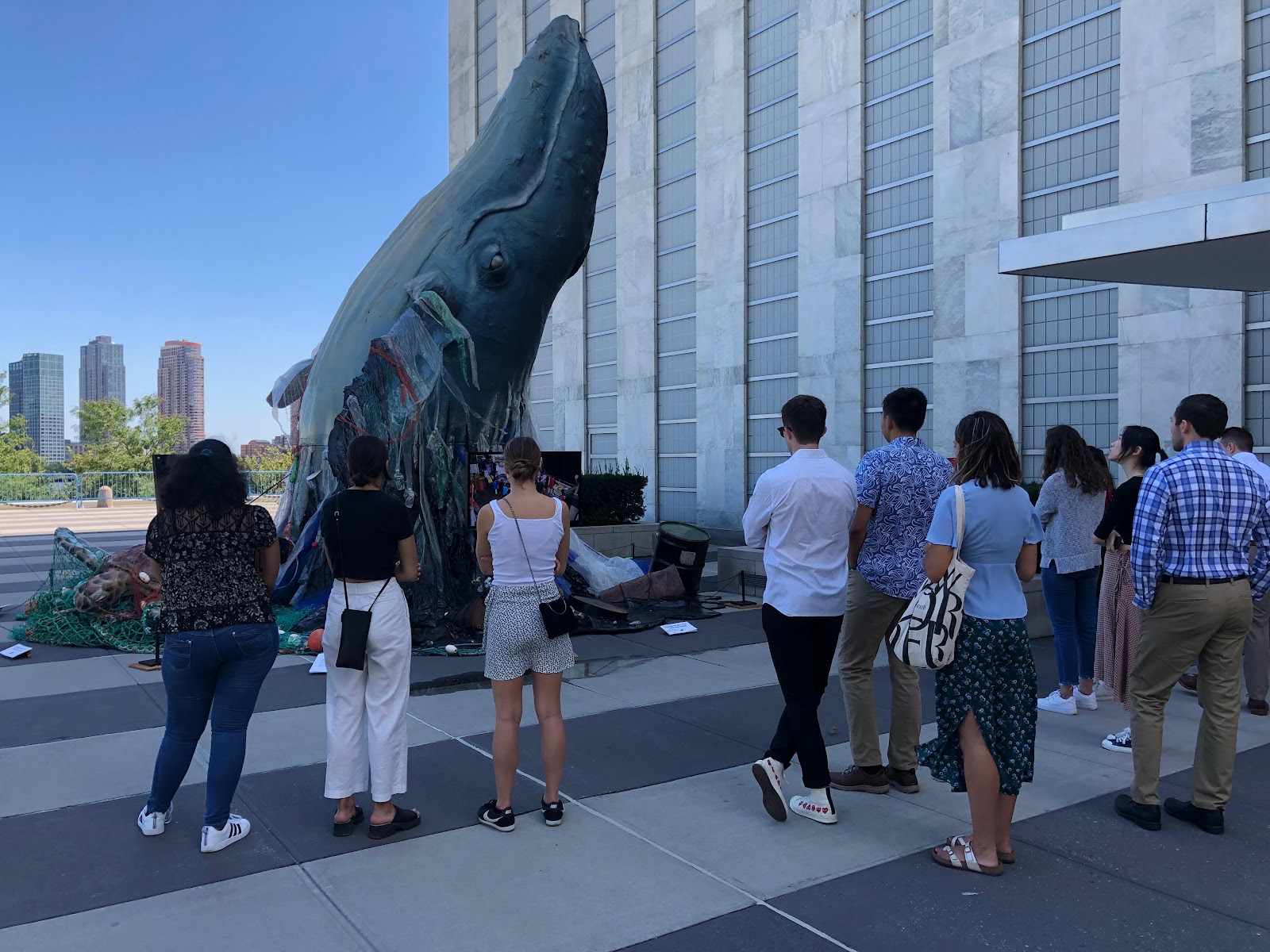 After exploring the United Nations Headquarters and our internship sites on the next day, we had the opportunity to share a meal with some program alumni who shared with us their experiences during their time here and showed us the ropes. From how to leverage our skills, past experiences, and knowledge to where to buy affordable groceries, the alumni shared with us their experiences in the program and lessons on how to have a great experience in New York and be successful at our internships. 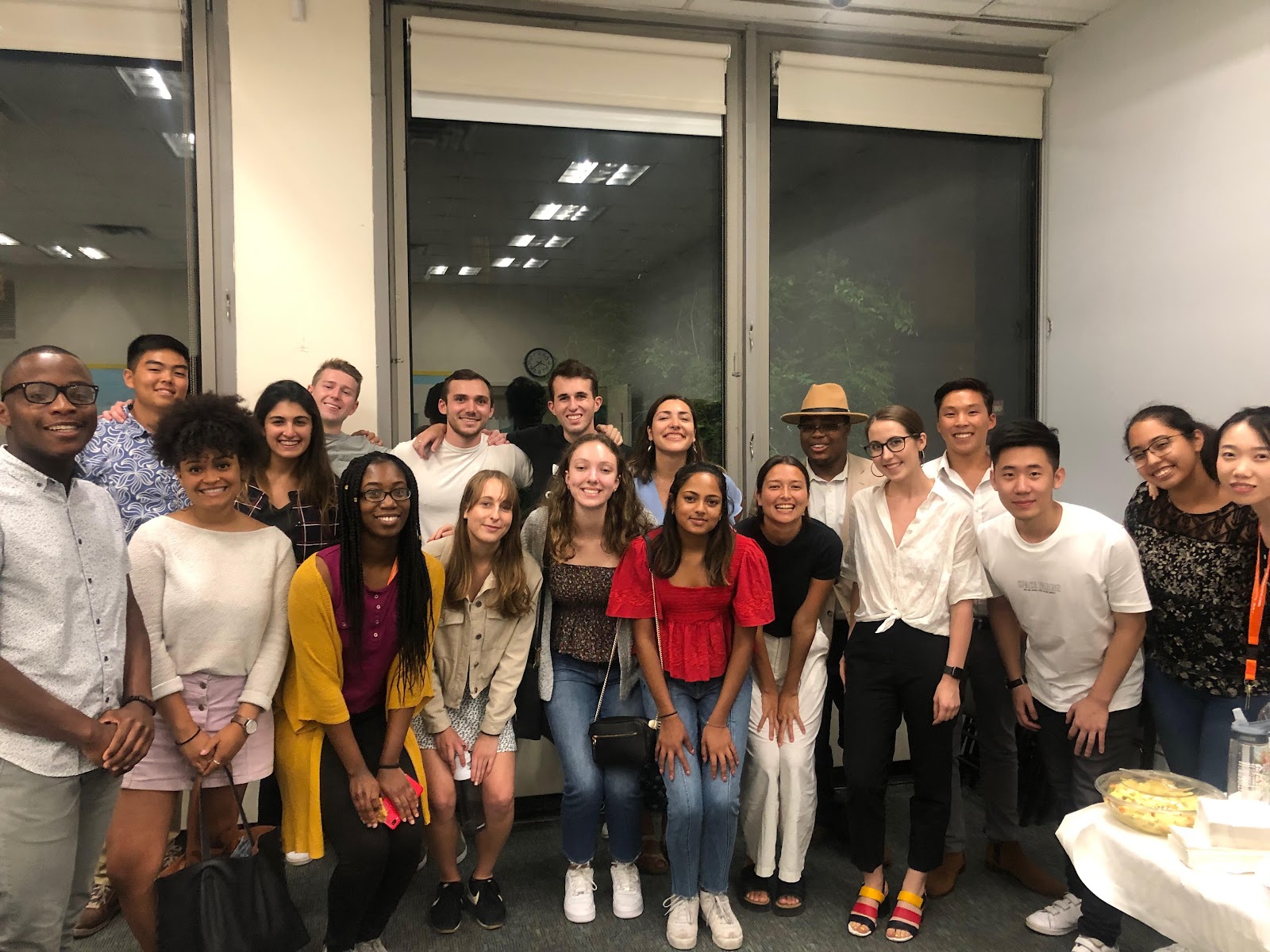 After the long Labor Day weekend – which we used to familiarize ourselves with New York City, we began our internships on Tuesday, September 3rd with our assigned UN missions and agencies. In our first week, some of us were thrown directly thrown into the heat of our responsibilities while others were given ample time to learn about their internship sites and catch up with their recent initiatives. However, one thing was certainly common during our first week and this was our shared excitement and anxiety over what the future had in store for us at our internship sites especially as we prepare for the United Nations General Assembly week.

Below are the experiences of members of the cohort during the first week:

“It has been four days since I started my internship at the United Nations Foundation (UNF) mainly working with the Business Council for the United Nations (BCUN) team. I really felt welcomed by the team on the first day when one of the team members spent 30 minutes introducing me to everyone in the office. My supervisors also took me to lunch on the second day to really get to know me as a person. I am very grateful that my supervisors asked me about my career interests and tried their best to assign me work in which I am the most interested and from which I can learn the most. For instance, because the team came to know about my previous work experiences in the private sector, I was given the long-term project to keep track of what is happening in the finance industry related to the UN and the SDGs (Sustainable Development Goals) and to produce a weekly newsletter that will be circulated both in the office and among UNF members. Because of the nature of the UNF's work, I am often required to sit in lengthy meetings with our members and to take notes, but each meeting has indeed been a great opportunity for me to learn more about how the UNF supports the UN from an insider point of view.”

“Although work at the United Kingdom’s permanent mission to the United Nations got off to a slow start, I found the environment of the mission exhilarating. Upon first arriving, we were given a tour and instructed on the office’s various security protocols. All around us, there were conversations about negotiations, UN resolutions, and BREXIT. I spent many years reading about the actions of the UK, but this was a chance to see it at work. As one might expect, the mission is very busy as it prepares for the UN General Assembly and Committee season. One of my responsibilities in the coming months will be to assist the Third Committee of the UN which addresses Social, Cultural, and Human Rights issues. With that work in mind, Kate Dinauer, who will also assist with Third Committee, and I were brought into a meeting where the UK’s representatives were discussing the different resolutions and statements which were being written on those issues. We got to glimpse the intricate behind-the-scenes work that goes into preparing the overall message of the UK at the UN. That meeting made me appreciate the skill needed to craft a unified message across a multitude of topics. Lastly, the Oxy UK interns were able to sit in on briefing for the upcoming Climate Change Summit. I often read about these sorts of summits in the news. However, I do not remember ever hearing much about the planning process and the level of discussion needed for them to be a success. Having seen this early stage, I can’t wait to see the end result”

“Working at the UN Relief and Work Agency for Palestine Refugees, UNRWA, a major conversation since beginning my internship has continued to be the issue of funding. Indeed, a UN agency which has always been reliant on external humanitarian contributions since its conception, UNRWA took its biggest hit in 2018 when President Trump decided that the U.S. would no longer invest in the Palestine refugee organization. A decision which now jeopardizes UNRWA’s ability to keep its programs and services open across the Middle East, my greatest hope as a new staff member this semester is to contribute to UNRWA’s outreach and capacity building both within and outside of the UN. A whirlwind of a first week, my internship at UNRWA has already taught me so much in terms of the inner workings of the larger UN system. From attending high-level meetings led by the Coalition on the Exercise of the Inalienable Rights of the Palestinian People to the upcoming Sustainable Development Goals Summit, I’ve realized that observing the behind the scenes dialogue amongst NGOs, Member-States, UN missions, etc. is just as important as tangible UN decisions or resolutions. Moreover, a tremendous learning experience in terms of my own critical analysis and writing skills, I am looking forward to learning even more with the annual 74th General Assembly right around the corner”