Out of the comfort zone and off to China | Occidental College

Out of the comfort zone and off to China 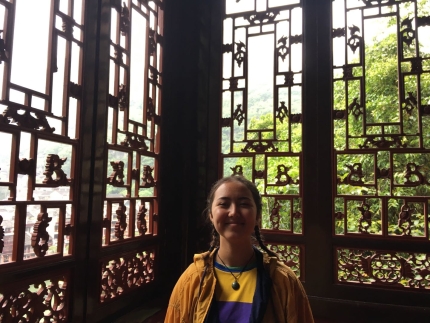 "The Transformation of Urban and Rural China" was the class that stood out among the many emails I received from Oxy trying to keep students updated over winter break.

As a Biology major, I immediately thought I have no chance of getting into this History class. I thought, I’m up against so many knowledgeable History majors and those with so much experience in difficult, writing-based classes that I was unsure whether I would thrive or not. That being said, I love a challenge and not only did I have a cultural interest in China but also an academic interest in the class and so by demonstrating this I received a place in the course. Oxy really encourages you to explore your interests regardless of your intended major, and there’s continuous encouragement to take yourself out of your comfort zone-- this class was just that for me.

Throughout the semester, Professor Day taught us all about the theory and history of both the city and countryside in China, specifically China’s very ambitious urbanisation and modernisation plans. We discussed the extent and effects of these construction plans, the resulting displacement of rural people, the treatment of migrant workers throughout history and so much more. Whilst doing the readings for this class, I couldn’t help but drift off and imagine how these concepts came to life. Every time this happened I would then become overwhelmed with excitement from the realisation that I would actually get to witness them in China. I felt nothing but elation in anticipation of what was to come; we had a tentative schedule, which included a few of the classic touristy trips, but a lot of it was subject to change-- the idea of not knowing was exciting in of itself.

The plan was to spend two weeks in the city of Beijing, and one week in the countryside of Guizhou, a rural province within China, but the bits in between were fairly undecided. It was truly a testament to what we had learned in the class: China is ever-changing whether it’s their buildings or their policies, and we were all fully aware of these circumstances. With lots of preparation and paperwork, we set off to China.

First off, everywhere we went the food was incredible and the standard was incomparable to anything I’ve ever eaten before (sorry Mum). Due to my family background I have had experience with Chinese culture but it was a wonderful experience (and hilarious at times) to be immersed in the culture so deeply and so quickly, as well as being able to witness to the whole group do so too. The group was evenly divided between those who had experience with Chinese language, and those without any, so the language barrier was certainly a challenge but definitely one that brought us together as a group. Without realising it, we were constantly having class discussions in the most random of places: the dinner table, the park, the street, the bus rides to different places etc. It took away any intimidating classroom vibes and everyone always had something valuable to say about their experiences. During our time in Beijing, we visited the hutongs, which are traditional courtyard residences that have now experienced a lot of commercialisation, migrant schools, farms, and had many lectures from guest speakers.

Aside from class trips, we also had a lot of free time to explore. From Tiananmen Square to the Great Wall to the Olympic Park, we easily completed all of Beijing’s famous spots. During our free time, we continuously found ourselves noticing and contextualising our surroundings, the ridiculous amount of construction everywhere and its impact on the neighbourhoods around it, the amount of space in the Olympic Park and contrasting this to the compact villages just around the corner, to name a few examples. Without having taking this class, I probably wouldn’t have had these same discussions, so I instantly felt grateful for the opportunity to do so.

I also felt grateful for not having to worry about the costs of going abroad. As I receive financial aid at Oxy, it was carried over to this class as all the study abroad programs at Oxy do. This way I was able to focus on the class and the full experience of it all including haggling in another language, then realising you don’t actually want to buy the cups, walking away and having the woman chase you down the street trying to convince you to buy the cups…(true story and hilariously traumatising).

Just as we were getting used to Beijing we took a 24 hour train down to Guizhou, which was fantastic and a hugely contrasting experience compared to Beijing. Cramped and forced to interact, our class played endless games of UNO and Contact, and really bonded as a group. By the time we got to the countryside, we had learned so much about each other and were ready for part two of the trip. The countryside was beautiful, and we visited many Miao villages (one of the ethnic minorities in China), we were able to participate in some rice farming, and of course ate a lot of delicious food.

The Miao people have a dialect of their own so that was another layer added to the cultural barrier as none of us knew this language, but again, navigating communication without words was a fascinating experience. We got to see how these villages have been commercialised over the years for domestic tourism, and went on so many beautiful hikes.

This trip was my first glimpse of China, and I feel so lucky to have enjoyed it and learned as much as I did. I got to meet wonderful people in China, and got to know some wonderful people that I came with, including Professor Day, a fantastic professor who I highly recommend taking a class with and befriending. The class was nothing like I expected, but the unexpected was presented in the absolute best way.