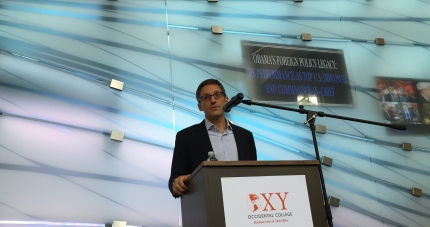 On October 14th, Derek Chollet came to Occidental College to discuss President Obama's foreign policy legacy. Derek Chollet is counselor and senior advisor for security and defense policy at The German Marshall Fund, was the U.S. Assistant Secretary of Defense for International Security Affairs between 2012-2015, served as the senior director for strategic planning on the National Security Council staff, and is the author of "The Long Game: How Obama Defied Washington and Redefined America's Role in the World." Mr. Chollet has served in many other foreign policy positions.

Derek Chollet began with emphasizing the importance of diving deeper into President Obama's foreign policy decisions and analyzing America's role in the world from President Obama's perspective. Rather than an Obama "doctrine", Mr. Chollet argues that President Obama used a foreign policy "checklist" to inform his decisions in complex situations while in office. This checklist, which is thoroughly described in Mr. Chollet's book "The Long Game," consists of eight principles: balance, sustainability, restraint, precision, patience, fallibility, skepticism, and exceptionalism.

Balance: America can't possibly do everything in every region due to its limited resources. In order to be strategic, tradeoffs must be made.

Sustainability: Foreign policy decisions must be sustainable, realistic, and effective in the long run. Temporary solutions are ultimately not in America's best interest.

Restraint: Intervention and involvement can take many forms. Intervention does not always have to involve military action.

Precision and Patience: These are tools used to carefully execute the delicate process of diplomacy.

Fallibility: It is crucial to acknowledge mistakes and limits of American power. Rather than being an apologist, President Obama, according to Mr. Chollet, is a pragmatist and a skeptic.

Through the presentation of these eight foreign policy principles, Derek Chollet inspired students to take a closer look at how leaders address situations in a complex, diversifying international order.