Finessing the China Relationship in the Age of Trump | Occidental College

Finessing the China Relationship in the Age of Trump 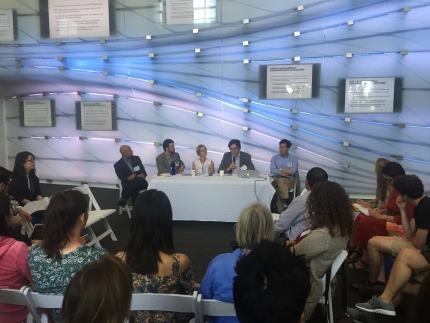 In a public forum hosted by the Young Initiative on the Global Economy at Occidental College, students and faculty came together to discuss the US-China relationship as part of the Trump and The World Series.

Speaking on the panel were Shoujun Cui, Associate Professor and founder of the centre for Latin American Studies and Assistant Dean at Renmin University of China; Monica DeHart, Professor of Anthropology at the University of Puget Sound; Gustavo Oliveira, Postdoctoral Fellow and visiting Assistant Professor of Environmental Studies at Swarthmore College; and Leonardo Stanley, Associate Researcher at the economic department of the Center for the Study of State and Society – CEDES, Argentina.  The Panel was moderated by Professor Sanjeev Khagram, Director of the John Parke Young Initiative on the Global Economy.

The panel brought insights about subjects as varied as explanations for high-risk investment behavior carried out by Chinese firms, to struggles over expanding Chinese soft power to how the US withdrawal from the region will affect China's challenge to the US claim of moral high ground.  Speakers also cast light on the nuanced nature of diplomatic relationships with Taiwan, which have been tested in recent years as China has rapidly expanded its investment in the region. Although panelists discussed many topics, the forum had an overarching theme: what a Trump presidency would mean for relationship between China and the United States.

Panelists contemplated what the world would look like without U.S. hegemony and with Chinese leadership. Cui was asked what his students thought of the election. He noted that Trump’s election made them happy - what seems to be bad for the U.S. is very beneficial for China. DeHart made the comment that this, among other things, shows how U.S. moral authority may be waning in the future. In the continued discussion, the panelists commented on how China’s leadership would be different from the U.S., how it may shape the world, and what it would mean for other countries. They also embellished on how Chinese and Chinese American companies growth would affect Latin America, South Asia, and Africa.

Students, faculty, staff, and other guests gained diverse perspectives on the changing face of global politics and how the dynamics of the U.S./China relationship may change in the coming years.