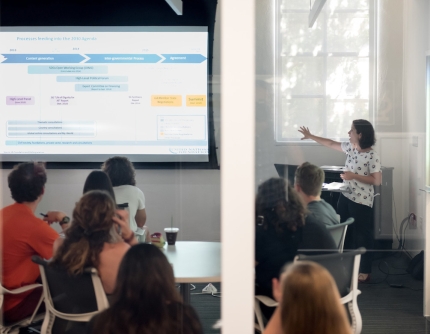 The MDGs, which are the original eight goals created by the UN to reduce poverty in developing countries between 2000-2015, were successful but significant challenges still remain. According to Slotin, the 17 newly created Sustainable Development Goals, reflect the vast inputs of the global community and many political tradeoffs. To give some insight into the process, she went in depth to say that during the SDG Open working group, the 70 countries involved were divided into troikas(groups of three) which forced compromise throughout the goal negotiation process. As a result, in contrast to the MDG’s, the SDG’s prioritize a Universal Agenda, acknowledging past wrongs and focusing on evening the economic playing field. This represents the contributions of developing nations like Brazil, China and India. Highlighting the move away from U.S./U.K. hegemonic domination towards a spirit of inclusion, as it is the first time we have a global framework that integrates social, economic and environmental goals. Comparing the MDG era to the SDG era, Slotin believes the former was characterized by basic foreign aid in the form of official development assistance with the latter focusing more investment, blended finance and policy change. In Slotin’s words the Sustainable Development Goals address "Dignity, Prosperity, Justice, and Partnership, leaving no one behind."

A huge advocate for the Data Revolution, Ms. Slotin believes that successful implementation of the new global goals will be rooted in reliable, accurate, and timely data. "There’s not enough high quality data, strong data will help to show us where we need to focus our interventions-such as ensuring access to health services, education and more. Harnessing data matters in order to ensure "Equality, Monitoring, Implementation and Accountability," she said to an audience of eager Oxy students. Addressing them at the end of her talk, she made it clear that awareness is the key to accountability and that people have to ensure that their governments are doing their part. This call to action was meant to encourage students to use their platform to either tell everyone about the #GlobalGoals, champion a single goal personally or simply just get involved in their local communities. Students went on to ask fascinating questions about the effects of the current U.S political environment on climate change efforts globally, the relationship between civil society and the UN, and most poignant, how the refugee crisis is affecting the implementation of the goals. Her answers seamlessly tied in the need for better data across the board, from climate change enforcement, to improving civil society engagement, and to account for the issue of statelessness in migration.

The Young Initiative and the Occidental College Community thanks Ms. Jenna Slotin for her engaging talk and look forward to championing the SDG’s here in Oxy community.

For more information about Jenna Slotin and the UN Foundation,