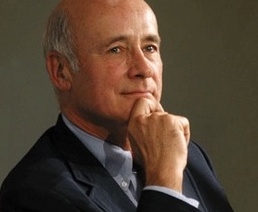 Joseph S. Nye Jr. has consistently been named one of the most influential American political scientists in history. Nye co-created the international relations concepts of neoliberalism and smart power and is the former dean of Harvard's prestigious Kennedy School of Government.

During his visit to Occidental College, Prof. Joseph Nye offered a public talk with Occidental College’s faculty, students, and staff at the Global Forum of the McKinnon Center. In conversation with Oxy’s own Stuart Chevalier Professor of Diplomacy and World Affairs, Ambassador Derek Shearer, Prof. Nye shared the foundations of his last publication “Do Morals Matter? Presidents and Foreign Policy from FDR to Trump.”

In his introduction of the book, Prof. Nye shared with the audience the learnings from his vast experience in the public sector between 1977 and 1995. Nye served several administrations in the Department of State and as Assistant Secretary of Defense for International Security Affairs for President Clinton. In this book, Nye expects the public to analyze the influence of morality in international and domestic politics from economic, militaristic, and decision-making lenses.

With Do Morals Matter? Presidents and Foreign Policy from FDR to Trump, Nye hopes to shed new light on the world of global politics and effective leadership, an area that is greatly criticized for the influence of policy-makers in societies, and US presidents in the global panorama. Morals are often put aside for some decisions, and in some historical periods, they have been at the core of politics. This book is an opportunity to engage with these deeper dynamics of political theory. Closing this discussion, Ambassador Shearer noted that Nye’s approaches to political theory represent successful ways of uniting theory and practice for the effectiveness of US policies and role in the world.