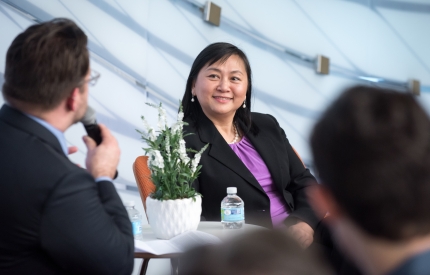 On Thursday, February 2, 2017, the Honorable Jacqueline Nguyen visited Oxy to discuss her journey from Oxy on graduation day to her current position as a Judge sitting on the United States Court of Appeals for the Ninth Circuit. She is the second guest in the ongoing Distinguished Alumni Speaker Series, hosted by both the Young Initiative and the Politics Department.

Judge Jacqueline Nguyen graduated from Occidental in 1987 with an AB in English and then received her JD from UCLA Law School. After graduation, she worked as a litigation associate at a Los Angeles firm before joining the US Attorney’s office. In 2002, she served as a judge on the Superior Court of the County of Los Angeles. In 2009, Hon. Nguyen was appointed by President Obama to serve as a US district judge for California’s Central District. In 2011, she was nominated to the United States Court of Appeals for the Ninth Circuit.

On Thursday, Judge Nguyen, informal and charismatic, spoke with candor and eloquence, answering questions from the moderator, Professor Edward Kammerer. The two bonded over former tenures before the bench, Judge Nguyen as a US attorney, and Prof. Kammerer as a public defender.

The Judge answered questions about diversity (or, lack thereof) on the federal bench—diversity is broadly defined, including diversity of philosophy, ideas, experiences, etc., and is not just limited to race; by the way that Oxy, and specifically being an English major, prepared her for a career in law—a solid foundation in English conventions (Judge Nguyen learned English as her second language) and the art of effective rhetoric helps her daily in writing effective opinions; the number of judicial vacancies and how that impacts the workload of the judiciary—importance of law clerks and team dynamics led by judges; and if she had any specific books she’d recommend—essentially, she said read what you love often, and diversify your list every six weeks with a book outside of your comfort zone. The conversation flowed with followups.

Learning the Judge’s path, students gained insight into what a life beyond Oxy might look like. In this peremptory moment in history in which each branch federal government must show its strength, the Occidental community was humbled by the presence of such a knowledgeable, levelheaded figure such as Judge Nguyen.