Kathryn Sikkink: Human Rights as a Tool for Emancipation 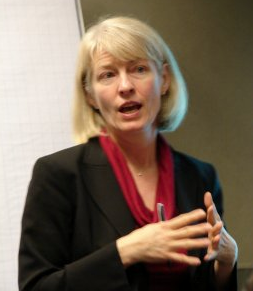 This past Monday, February 9th, 2015, Dr. Kathryn Sikkink visited Occidental College to give a talk entitled "Human Rights as a Tool for Emancipation."  I had the pleasure of hearing both her official talk, given to Occidental’s first-year class as a part of the Core Program’s lecture series, as well as attending a smaller lunch between Dr. Sikkink and students. Dr. Sikkink argued that indeed, human rights are a tool for emancipation; that human rights matter. They matter because countries and people all over the world have demanded human rights, and the umbrella of human rights is ever-expanding to address new issues, such as the rights of stateless peoples and LGBTQ rights. Using her personal experiences from Latin America, Dr. Sikkink spoke about why the North-South divide between human rights is not as wide as it seems and how the involvement of Latin American leaders in forging initial human rights documents has been forgotten.

Dr. Sikkink emphasized the role of activists in using human rights as a tool for emancipation, and that this role is not likely to change soon. With states as both the biggest protectors and violators of human rights, it is up to grassroots organizers to use the rhetoric of human rights to catalyze action, building pressure both at home and internationally. In conclusion, Dr. Sikkink expressed her career-long desire to make human rights an integral part of state action. When considering violations such as disappearances in Argentina’s dirty war or suppression of protesters in Ferguson, Missouri, Dr. Sikkink urged that "the ends [of human rights] are the full human security of every individual. Therefore, the ends are the full protection of human rights for every individual." Human rights will not rest, because it is a process towards realizing that human dignity is the most important cornerstone of our society. Dr. Sikkink made it clear that when our security is at risk, humans retreat into fear and make irrational decisions regarding their own safety. When our fight or flight mechanism is triggered, policymakers design policy for self-preservation and not to uphold the principles their state or position was founded upon. It is in these moments of fear that human rights are most vulnerable, and most useful.