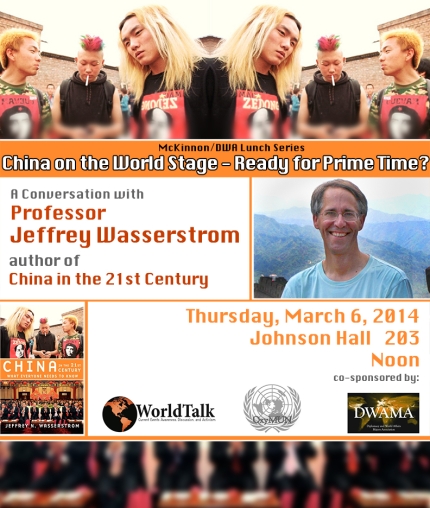 Professor Jeff Wasserstrom, from UC Irvine,  is  a modern Chinese social and cultural historian, with a strong interest in connecting China's past to its present and placing both into comparative and global perspective. He has taught and written about subjects ranging from gender to revolution, human rights to urban change. Both his first book, Student Protests in Twentieth-Century China: The View from Shanghai (Stanford, 1991), and one of his more recent ones, Global Shanghai, 1850-2010 (Routledge, 2009), have focused on China's largest metropolis. And many of his publications, including China in the 21st Century: What Everyone Needs to Know, a book he wrote for Oxford University Press in 2010 and updated in collaboration with Maura Elizabeth Cunningham in 2013, are aimed at speaking to general educated readers and anyone curious about Chinese history as well as specialists. His commitment to reaching out beyond the Ivory Tower shows through as well in other aspects of his career, such as my past involvement in the Irvine-based group blog/electronic magazine, "The China Beat"--some of the postings from which were incorporated, along with many other materials, in China in 2008: A Year of Great Significance, a 2009 book that he co-edited with Kenneth Pomeranz and Kate Merkel-Hess (formerly a UCI graduate student and then post-doc and now a faculty member at Penn State), and his collaboration with other UCI historians and members of the Literary Journalism Program in the "Conversations on Writing and Public Life" series.

Professor Wasserstrom spoke at Oxy today about China’s position on the world stage, and its  readiness to step into its role as a major global superpower.