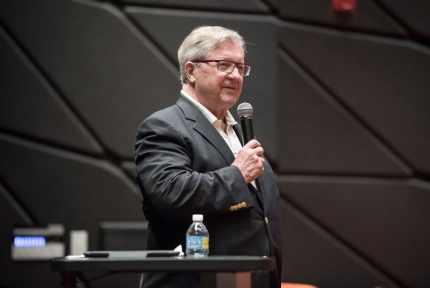 United Nations Week has served as a focal point for bringing together speakers, presentations and visual media to summarize and analyze issues surrounding international governance. On February 16th, the Honorary Lloyd Axworthy, former Foreign Minister of Canada gave a talk titled: "Resetting the Narrative: Peace, Security, and the UN's Responsibility to Protect."

Axworthy began on the upbeat note, telling the audience that "I do believe there is hope. I do believe that there is a way of making the world better." After the fall of the Berlin Wall and the end of the Cold war, global politics took a turn to focus on human security, the protection of people, rather than on more traditional national security. Conflict became less of a "cosmic clash of ideologies. Instead, war became both local and transitional, independent of sovereign states and rigid borders. Given this changing political landscape, Axworthy claims, it is critical that sovereignty ceases to become an end in itself for national governments. Instead, there must be an institution which engages everyone, not simply government ministers, in order to break down the idea that there is always an ‘other’ and to give real meaning to the words "never again."

As foreign minister at this transformative time in international politics, Axworthy spoke about how he had the opportunity to help write the rules of this new focus on human security. He began by spearheading the campaign to ban antipersonnel land mines. Although this campaign was initiated by Vets for Vietnam, it became a civic-political partnership organized by the Canadian government. By challenging the members of the initial conference to return in a year with a treaty to be signed, Axworthy took an unconventional approach to diplomacy in the Ottowa Process. On December 2, 1997, he was ultimately successful and the treaty was signed by 160 nations, marking a critical point in the trajectory of human security as a matter of state interest.

Despite this, Axworthy says that doctrines of human rights are often doubted by supporters of the idea that state sovereignty must be a primary interest and that international action typically fails. In response, Axworthy points to the intervention in Kosovo as an example of how an internationally agreed upon coalition can the conflict and bring an abusive regime to justice.

The Responsibility to Protect, or R2P, is critical in this new worldview. The idea started in the the early 90’s in regards to displaced persons, but was officially adopted by the UN in 2005 after the publication of a Canadian-led investigatory report. This doctrine states that a government that either cannot or will not protect its people cedes its sovereignty to the international community. R2P was used to garner support for intervention in Libya, but it was poorly executed. The international coalition left too soon, creating a power vacuum, and discourse about R2P became mixed up in discourse about regime change, which frightened China and Russia away from supporting other R2P motions. Thus, Axworthy argues, Syria has become the Rwanda of our generation with no hope for international action despite the initial promise of R2P. However, R2P is not necessarily a failure. Axworthy hopefully points to successful interventions in the Central African Republic, the Kosovar, and Mali.

Furthermore, Axworthy argues, R2P presents a framework that can be used to address other humanitarian crises, such as refugees or climate change, where governments are unable to help their own people. In looking at an international landscape that values human security, R2P provides the theoretical justification for saving human lives while still adhering to states’ protectiveness of their sovereignty. In R2P, there is hope for the peaceful world order which Axworthy worked to create.