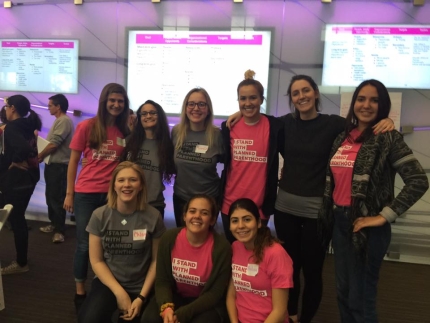 Last November, one of the club’s most successful events was the #TBT Dance with Sex Positivity. With everybody’s favorite 2000s songs and a sex/ body positive environment, this dance was a fun opportunity for students to reclaim their most awkward middle school dance. In addition to dancing, there was a memory wall where students could share their most awkward moments from middle school, a photo booth with feminist and sex positive props, and a raffle where students could win prizes (vibrators, lube, handcuffs, feminist socks, and more!).

RA Event: All About IUDs

On March 21st, RA Audrey Shawley and Planned Parenthood Club are putting on an event called "All About IUDs". The event will be an informal space for people to voice their questions and concerns about IUDs as well as other forms of long-lasting contraception. Audrey Shawley and Planned Parenthood Club will be giving information on different brands of IUDs, the pro’s and con’s, what to expect from the procedure, and what services are provided at the Planned Parenthood clinic in Pasadena. During the discussion there will also be genitalia cookies for everyone to decorate!

Pillow Talk: Teaming up w/ Active Minds to Discuss the Intersection of Sexual and Mental Health

This April, Planned Parenthood Club is teaming up with Active Minds to host a Pillow Talk in the Green Bean Coffee Lounge. People participating in the pillow talk will break up into small groups to discuss topics surrounding sexual health, pleasure, and mental health. This pillow talk is meant to be a relief event where students can show up in their pajamas, make crafts, and have both fun and serious discussions in a smaller group setting. In addition to crafts, Planned Parenthood Club will be giving out question sheets that people can fill out with a sexual partner to practice healthy communication.