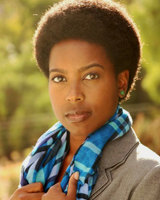 Nikki Silvestri is the Founder and CEO of Soil and Shadow, a project development firm working to create systems change while improving relationships between communities. As the Co-Founder of Live Real and former Executive Director of People's Grocery and Green for All, Nikki has built and strengthened social equity for underrepresented populations in food systems, social services, public health, climate solutions, and economic development. A nationally recognized thought leader, her many honors include being named one of The Root's 100 Most Influential African Americans.

Nikki is a Faculty Member at the Food Business School (she co-designed and taught one of their inaugural courses, "Ethical Leadership in Food Business"). She sits on the Board of Directors of the Business Alliance of Local Living Economies (BALLE), and is an advisory board member of MeWe, the next-gen social network, and TendLab. Nikki began her work in social change through the foster care system in Southern California, where she directed Foster Youth Empowerment Workshops. She has a master's degree in African American Studies from UCLA, and is originally from Los Angeles. She currently lives in Oakland, with her husband. Cathy O’Neil earned a Ph.D. in math from Harvard, was a postdoc at the MIT math department, and a professor at Barnard College where she published a number of research papers in arithmetic algebraic geometry. She then switched over to the private sector, working as a quant for the hedge fund D.E. Shaw in the middle of the credit crisis, and then for RiskMetrics, a risk software company that assesses risk for the holdings of hedge funds and banks. She left finance in 2011 and started working as a data scientist in the New York start-up scene, building models that predicted people’s purchases and clicks. She wrote Doing Data Science in 2013 and launched the Lede Program in Data Journalism at Columbia in 2014. Pedro A. Noguera is a Distinguished Professor of Education at the Graduate School of Education and Information Studies at UCLA. He is a sociologist whose scholarship and research focuses on the ways in which schools are influenced by social and economic conditions, as well as by demographic trends in local, regional and global contexts. Dr. Noguera serves on the boards of numerous national and local organizations and appears as a regular commentator on educational issues on CNN, MSNBC, National Public Radio and other national news outlets. Prior to joining the faculty at UCLA, he taught at New York University, the Harvard Graduate School of Education, and the University of California, Berkeley.

Dr. Noguera was a classroom teacher in public schools in Providence, RI and Oakland, CA and continues to work with schools nationally and internationally as a researcher and advisor. He has published over 200 research articles, monographs and research reports on topics such as urban school reform, conditions that promote student achievement, the role of education in community development, youth violence, and race and ethnic relations in American society. Dr. Noguera is the author of several books including: City Schools and the American Dream  (Teachers College Press, 2003), Unfinished Business: Closing the Achievement Gap in Our Nation’s Schools (Josey Bass, 2006), The Trouble With Black Boys…and Other Reflections on Race, Equity and the Future of Public Education (Wiley and Sons, 2008), and Creating the Opportunity to Learn: Moving from Research to Practice to Close the Achievement Gap with A. Wade Boykin (ASCD, 2011). His most recent books are Excellence Through Equity (Corwin, 2015) with Alan Blankstein and Race, Equity and Education: The Pursuit of Equality in Education 60 Years After Brown (ASCD, 2015) with Jill Pierce and Roey Ahram. Saskia Sassen is the Robert S. Lynd Professor of Sociology at Columbia University and a Member of its Committee on Global Thought, which she chaired until 2015. She is a student of cities, immigration, and states in the world economy, with inequality, gendering, and digitization serving as the three key variables running though her work. Born in the Netherlands, she grew up in Argentina and Italy, and studied in France. Raised speaking five languages, she began her professional life in the United States. She is the author of eight books and the editor or co-editor of three books. Together, her authored books are translated in over twenty languages. She has received many awards and honors, among them multiple doctor honoris causa, the 2013 Principe de Asturias Prize in the Social Sciences, election to the Royal Academy of the Sciences of the Netherlands, and made a Chevalier de l'Ordre des Arts et Lettres by the French government.