The 2016-17 theme was "Re-envisioning Metropolis: Los Angeles and the Urban Arts."

Martha Gonzalez was born and raised in East Los Angeles and is a Chicana artivista (artist/activist), feminist music theorist, and academic. Gonzalez earned a PhD in Feminism from the University of Washington Seattle. In addition, Gonzalez holds an undergraduate degree in Ethnomusicology from the University of California Los Angeles. Her academic interest in music has been fueled by her own musicianship as a singer and percussionist for East L.A’s Quetzal for the last 17 years. Quetzal has made considerable impact in the Los Angeles Chicano music scene. The unique blend of East Los Angeles sounds as well as the social justice content in the work has sparked dialogue and theoretical work among various artist communities, and has been featured by both the Library of Congress and the Smithsonian Institute. Quetzal’s album Imaginaries received a Grammy award in 2013. Gonzalez is currently an Assistant Professor at Scripps College in the Claremont Colleges’ Intercollegiate Chicano/a-Latino/a Studies Department. For more information, visit her website. 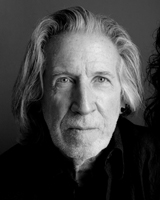 Edd Hogan is a native Southern California artist who did not follow a traditional art education career, training himself as a welder, machinist, steel worker, and even a Grammy-award winning graphic designer for album packaging. His sculpture is a way for him to create and understand the third dimension that he can not see because of a rare visual disability. Instead of literal objects, Edd sees the world in forms and shapes, and therefore, draws inspiration from something in the sky, a pattern in the sand, water rushing down a gutter, a tree, music, or live performance.

The Antoinette and Vincent M. Dungan Lectureship
on Energy and the Environment

James Rojas is an urban planner, community activist, and artist. He has developed an innovative public-engagement and community-visioning method that uses art-making as its medium. Through this method he has engaged thousands of people by facilitating over four hundred workshops and has collaborated with municipalities, non-profits, community groups, educational institutions, and museums, to engage, educate, and empower the public on transportation, housing, open space, and health issues. Rojas is also one of the few nationally recognized urban planners to examine U.S. Latino cultural influences on urban design and sustainability. He has written and lectured extensively on how culture and immigration are transforming the American front yard and landscape. He is the founder of the Latino Urban Forum, an advocacy group dedicated to increasing awareness around planning and design issues facing low-income Latinos. 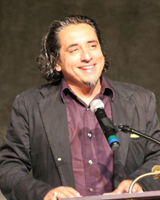 Richard Montoya is a critically-acclaimed playwright, director, actor, and filmmaker, as well as a Chicano activist. He is a founding member of Culture Clash, a performance group started in San Francisco in the 1980s. Over the last three decades, Culture Clash has written and performed plays across the United States, including A Bowl of Beings (1991), S.O.S. (1992), Radio Mambo (1994), Bordertown (1998), Chavez Ravine (2003), and Water & Power (2006). Using comedy and satire, their works provide an incisive exploration of race and identity, communities and their histories, and social justice. In addition to his work with Culture Clash, Montoya has appeared as an actor in several movies, recently directed the 2014 film adaptation of Water & Power.