Meet some of our religious studies majors. 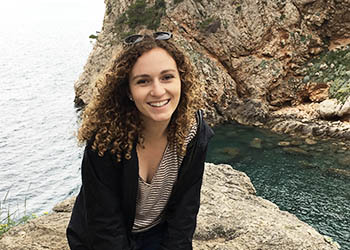 How did you choose to major in religious studies?

I would say I found religious studies (RELS) completely unintentionally. When I decided to major in religious studies I was already set on my mathematics major, but I loved the classes in the RELS department so much I wasn’t able to keep myself away. My sophomore year I took two amazing classes with Professor [Kristi] Upson-Saia, “History of Early Christianity” and “Death, Dying and the Afterlife in the Ancient Mediterranean World.” After that I was convinced I needed to major in religious studies as well. The history and information that I was exposed to in these classes gave me a different perspective of religion, but were also so applicable to understanding conflicts and beliefs in today’s world.

Can you describe your working relationship with RELS professors?

One of my favorite things about the RELS department is that all of the professors teach wonderful classes and are so engaged with their students. I felt incredibly supported by every RELS professor and was always able to talk with them about ideas and papers. When I was working on my senior comprehensives project, I felt so lucky that the two professors I was working closely with, Professor Amy Holmes-Tagchungdarpa and Professor Upson-Saia, were so willing to talk with me about ideas and provide me with much-needed feedback. I also loved that the professors who weren’t helping me on my senior comps would always check in when I saw them and ask how everything was going!

Religious studies is an amazing field to me because it is so vast: so many religions, so many parts of the world, so many different time periods to study! The ability to be exposed to so much is one thing I loved about the discipline, and I cherish my exposure to religions that I may have missed out on had it not been for my major. Part of what drove me to the major was the application that RELS provides to today’s society, and that has remained one of my favorite aspects. Additionally, for me, it was incredibly different from the coursework I was doing with the math department, and it was refreshing to me as a way to use a different part of my brain.

What are your plans or ambitions post-Oxy? How did the liberal arts approach shape your ambitions or professional goals?

I will be working as an analytics engineer with a tech company in the Bay Area, a job that will largely require coding, data analysis and turning data into information that can be acted upon. Many of those things draw upon work and skills I learned in my mathematics coursework at Oxy, but I am incredibly focused on applying the skills I learned from RELS to my job as well in order to communicate the numerical findings in a way that takes away the complexity of the data. Having a liberal arts background is giving me a way to look beyond the numbers and focus on how the communication and sense-making of the data is equally important. I like to look at my job as a translation of the liberal arts education that I received at Oxy.

Expose yourself to as many different RELS subjects and professors as you can! There is so much information within every class and so much detail in each religion that you will always have something new to learn. Every professor is passionate and inspiring, and also incredibly knowledgeable about their specialty, so don’t be afraid to talk with them about your interests and/or questions about a topic. 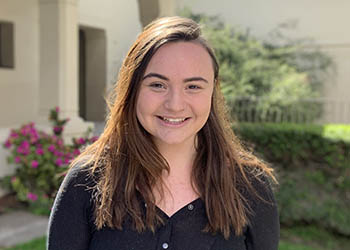 What inspired you to major in religious studies?

I decided to major in religious studies the beginning of my sophomore year. I had taken three classes in the department and really enjoyed the interdisciplinary nature of the major. The topics we studied in class were not limited to a historical or sociological method approach, but rather, the professors encouraged us to engage with concepts and theories at all angles.

Can you describe your working relationships with RELS professors? Are there any standout classes you’ve taken?

The professors in the department are brilliant. They are all so passionate about the classes they teach, which makes the material all the more appealing as a student. I loved the classes “‘Good’ Sex: History of Christian Sexual Ethics,” “Environmental Ethics and Religion” and “Critical Approaches to the Study of Religion.”

What are your plans or ambitions post-Oxy? How has the liberal arts approach helped to shape these ambitions?

Throughout my academic career as a religious studies major at Oxy, I have developed a passion for archival research and education. I look forward to applying and refining the skills that I have cultivated over the past four years by pursuing a career as an information professional. My major has allowed me to cultivate a deep understanding of the complex nature of religion in human societies. But more generally, my liberal arts experience has furthered my ability to contextualize primary and secondary sources for research purposes.

I would take as many classes across as many religious traditions as possible. You never know what topics or what content will resonate with you. I didn’t realize I wanted to be a RELS major until after my third class. I also would advise that students who enroll in these classes should participate in class discussion as much as possible. I was a rather timid underclassmen, and wish I had spent more time contributing to conversations with my professors and peers because I think I would have been even more engaged with the material. 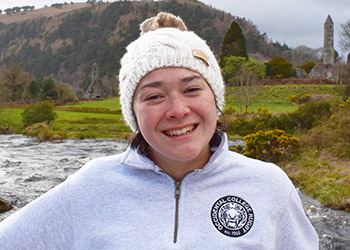 What inspired you to major in religious studies?

My first year at Oxy, I took a course with Professor [Kristi] Upson-Saia called “History of Early Christianity.” I really enjoyed the way that religion provided a different way to engage with history, and it really spoke to me. So, I signed up for more classes out of curiosity and ended up really enjoying all the different aspects that the religious studies department had to offer.

Can you describe your working relationships with RELS professors? Are there any standout classes you’ve taken?

All of the professors in the department are wonderful to work with, and they are always willing to talk about ideas or readings during office hours. Personally, I’ve really enjoyed the discussion-based courses that I’ve taken with Professor [Keith] Naylor, and the way in which he is able to engage all of us and spark a discourse surrounding the readings and other ideas relevant to the course.

What do you like most about the discipline of religious studies?

I enjoy the variety of methods and concentrations that you can choose from. I think that the department has created a place where—no matter what interests you about religion—there is a professor that knows something about it, or has done research about it, or may even be teaching a class that relates to it. This also allows you to explore different aspects of religion that you may not have given much consideration to.

Take classes from many different professors. All of them are really interesting and you might find something that sparks your interest in religious studies beyond just one class.