​​​​The purpose of the Palos Verdes Reef Restoration Project is to restore rocky-reef habitats and associated marine species on the Palos Verdes Shelf that were impacted by contamination in the sediments from the discharge of DDT and PCBs from the Joint Water Pollution Control Plant’s Whites Point Outfall, as well as to restore reefs that have been impacted by sedimentation and scour.

This restoration project will fulfill the objective of the NOAA Montrose Settlements Restoration Program (MSRP) to restore fish and the habitats upon which they depend within the Southern California Bight. This reef will provide essential fish habitat and substrate for kelp, other marine algae, and marine invertebrates to become attached to, creating a productive rocky-reef ecosystem in an area with limited hard substrate. 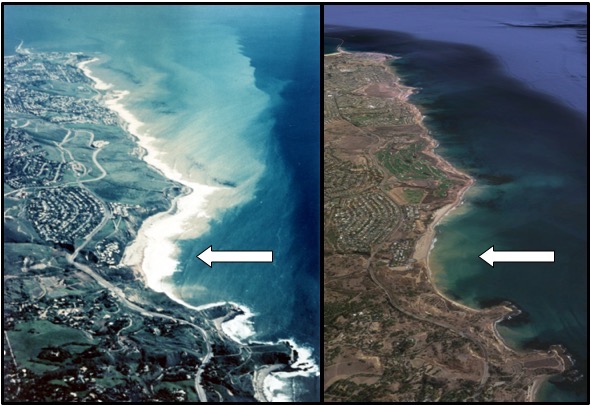 The amount of giant kelp and rocky reef habitat on the Palos Verdes Peninsula has declined dramatically over the last century for several reasons. In particular, pollution from the Whites Point sewage outfall and sedimentation from landslides resulted in the loss of almost all of the giant kelp on the peninsula by the 1960s. Beginning in the 1970s, kelp has made a comeback due to restoration and enhancement activities including dewatering the Portuguese Bend Landslide which dramatically slowed sediment deposition, extending the sewage outfalls into deeper water and treating the sewage itself, as well as active kelp out-planting. However, in the section of the peninsula between Portuguese Bend and Point Fermin, much of the historic low-lying reefs continue to be heavily impacted by chronic sedimentation due to reef burial and scour and associated turbidity. The amount of rocky reef habitat has significantly decreased, as such determining the optimum technique for restoring this lost habitat is the focus of this study. 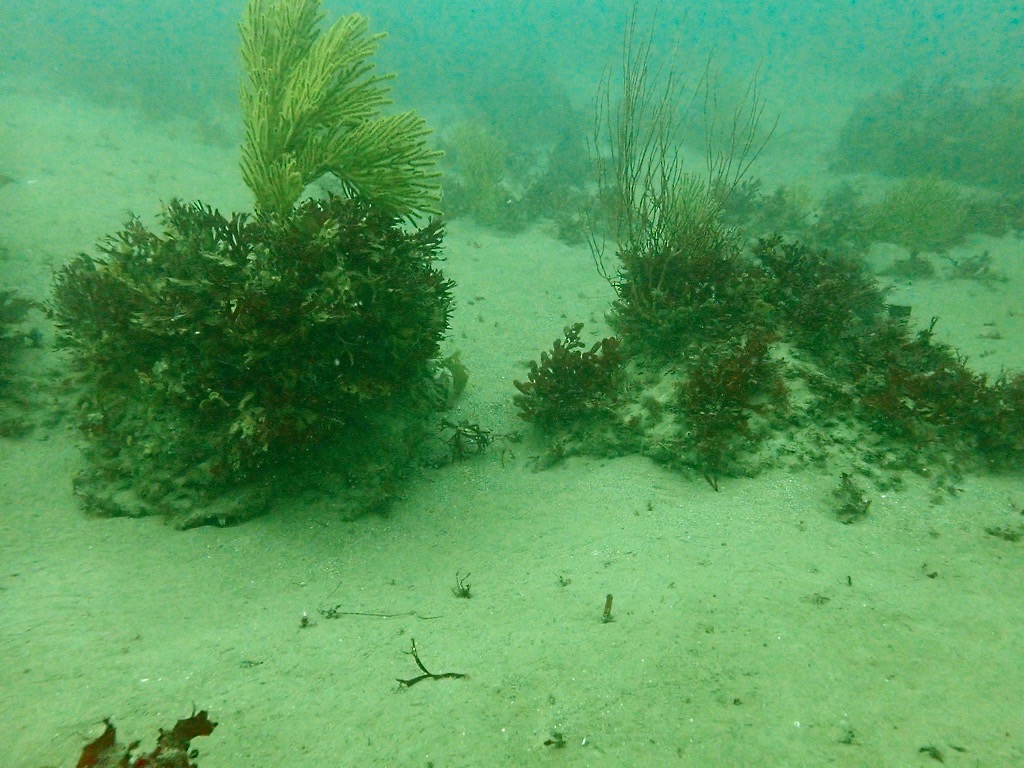 Over the past decade, we examined the potential efficacy of fishery production enhancement reefs in this region by conducting an intensive biological and physical sampling program throughout the subtidal areas of Palos Verdes Peninsula. Notable among all survey locations is a relatively high relief (~5 m) area of reef within the sediment impacted area, KOU Rock, that consistently has the highest fish biomass density among anywhere on the peninsula. The high structural relief prevents sediment accumulation, scour, and subsequent reef burial, and this reef ultimately served as the example for the design of sets of quarry rock reef “blocks” that together form the proposed restoration reef.

We use a standardized comprehensive community monitoring survey method, the CRANE Protocol, that quantifies fishes, invertebrates, algae, and habitat characteristics within multiple depth zones at each site. In early 2020, we surveyed each module footprint using the CRANE protocol and searched for any presence of Caulerpa spp. or eelgrass (Zostera spp.).

From these CRANE surveys we are able to quantify: 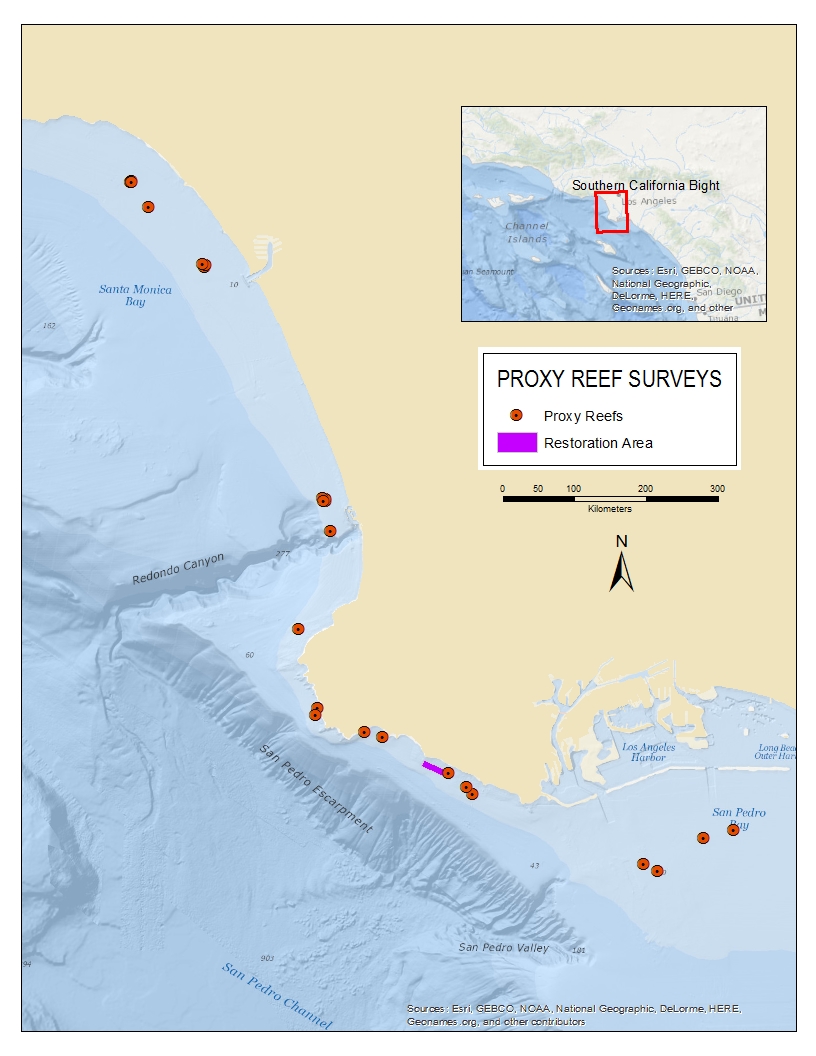 In order to further our understanding of how reef shape, size, structure, and relief affect the fish, invertebrate, and macroalgal communities, an additional 25 isolated reefs along and adjacent to Palos Verdes Peninsula were surveyed using the CRANE protocol. These reefs included six natural reefs, 10 manmade reefs built with quarry rock, three shipwrecks, three sites with scattered debris, two sites with quarry rock resting on discharge pipes, and one site with engineered shelters. In addition to typical survey techniques, total reef height was also measured by recording depth at the bottom and top of the reef. 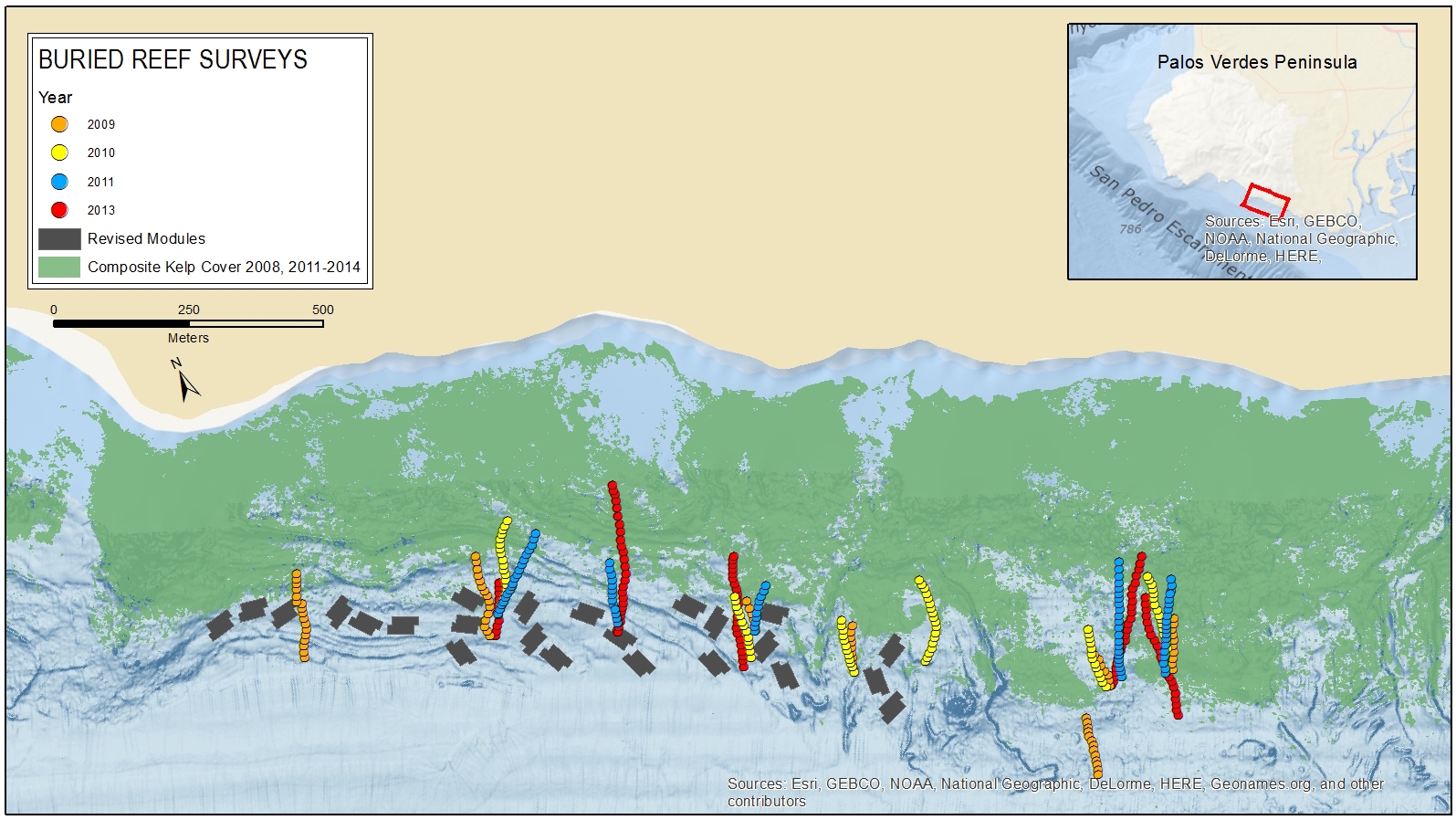 We also conducted supplementary scuba surveys at 9 locations over several years to determine the sediment depth over rocky reef throughout this area in an effort to better characterize soft bottom habitat areas in the study area and determine proposed locations for the restoration reef blocks. Sites that were found to be primarily exposed rocky reef were excluded from successive surveys. 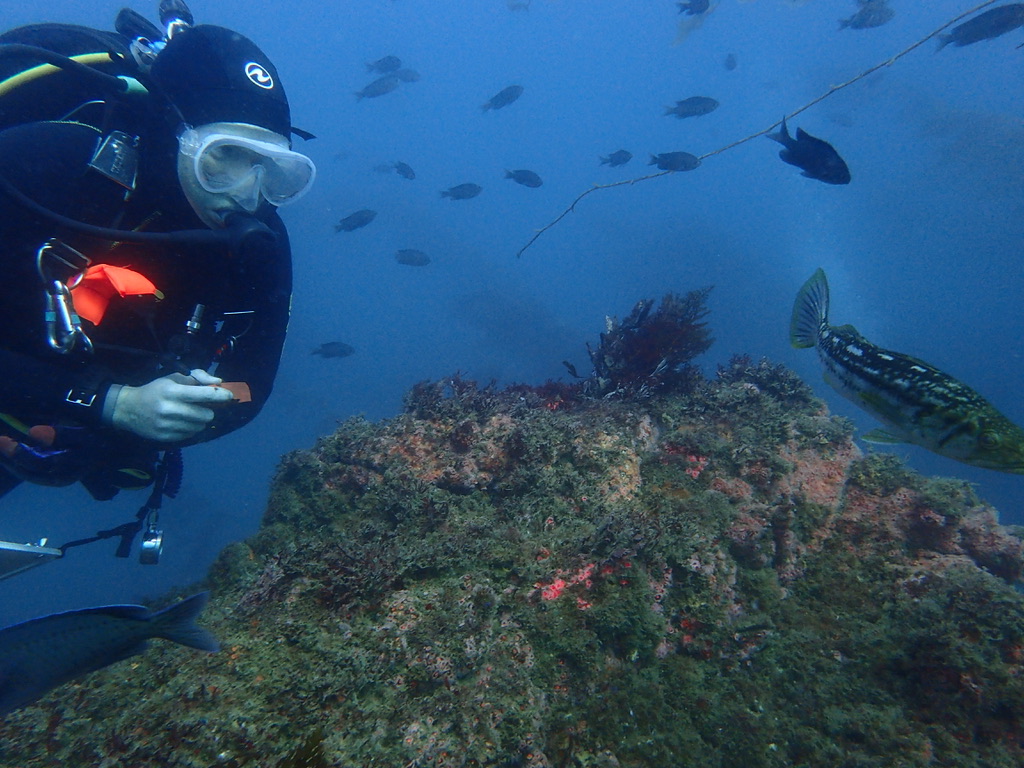 Our goal in the reef design plan was to utilize limited resources and engineering criteria to develop a restoration reef plan that maximizes the biological benefits. These benefits include insights drawn from reefs at Palos Verdes and throughout the Southern California Bight and include species richness, diversity and biomass. Our research indicates that multiple factors including reef size, spacing, relief, rock size, heterogeneity, depth, sediment depth, location relative to kelp bed perimeter and flux all influence reef performance. We developed a secondary production model that specifically analyzes the production of fish biomass to evaluate reef performance. In this project, these factors were juxtaposed with the economic, physical and engineering constraints to develop the restoration plan. 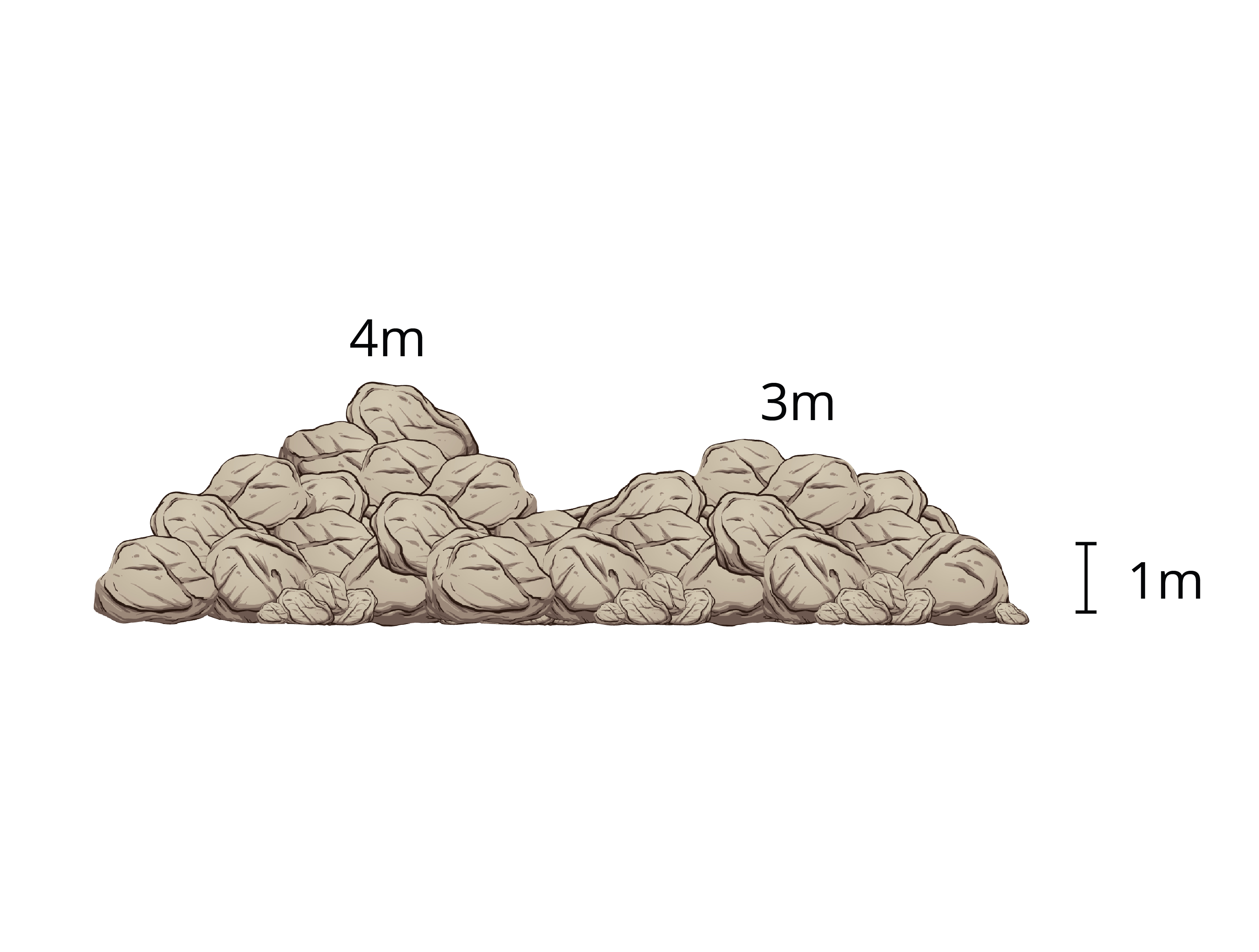 Maximize heterogeneity in reef characteristics (e.g., relief, interstitial space, overall angle of outer reef surface) to increase biodiversity by increasing the availability of distinct micro-habitats within each block while being consistent with the size of natural reefs along Palos Verdes Peninsula.

The overall approach is to balance scientific study design considerations with maximizing the potential for an effective restoration effort across the range of important species and overall kelp forest biodiversity. Major motivations included incorporating heterogeneity throughout the restoration reef design both within (e.g., varying module heights within blocks) and amongst (e.g., varying block orientation). 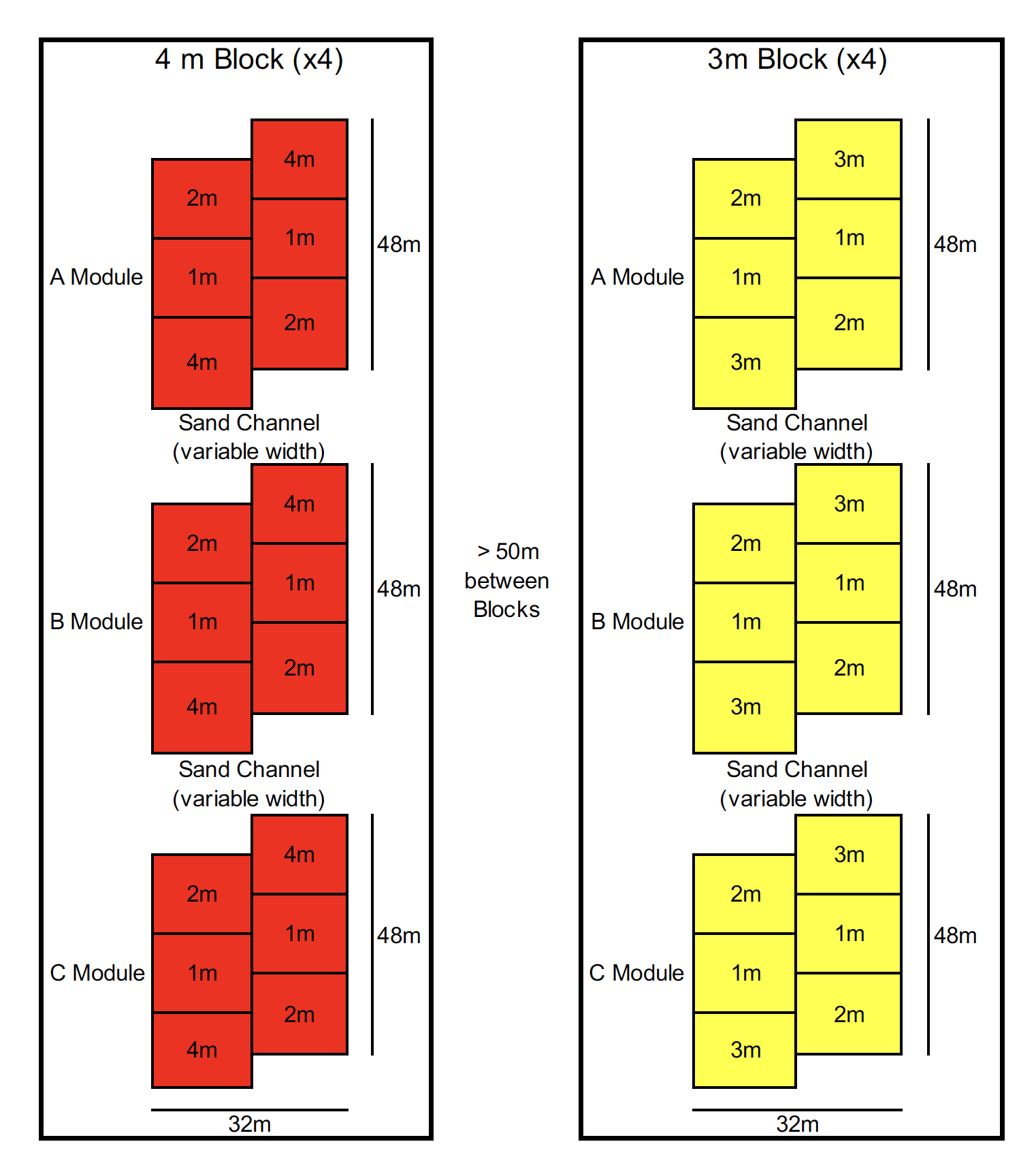 The restoration reef is designed as set of six “blocks”. Each block contains three modules (A, B, C). Each module consists of a 3 x 2 set of six “piles”. Blocks will be in two forms, either with a 3-m maximum module height (relief) or a 4-m maximum module height, with three replicate blocks per set, and three replicate sets of each height. This will permit a comparison of the two reef heights impact on fish biomass and production.

There is a 10 to 20 m wide sand channel between modules and at least 50 m of space between blocks. By separating the blocks and modules by the appropriate distances we can restore a greater amount of reef perimeter sand-rock ecotone habitat and we can increase the independence of replicate reef blocks. 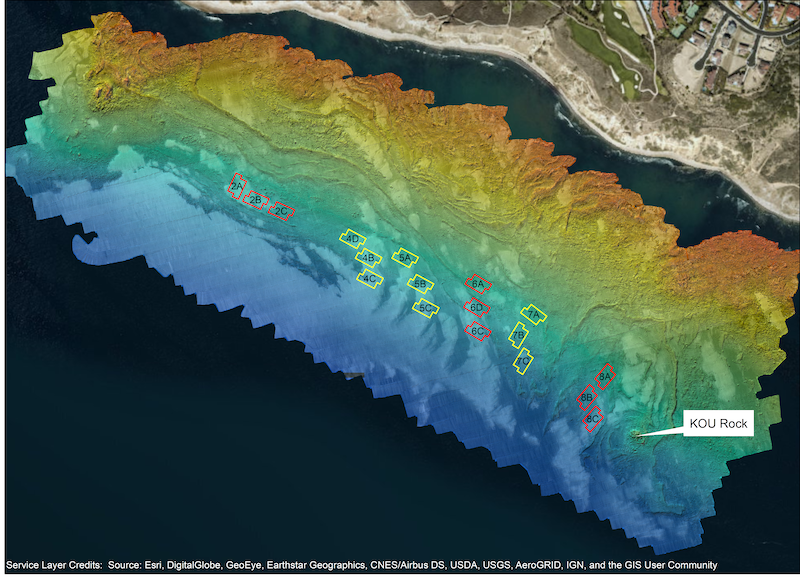 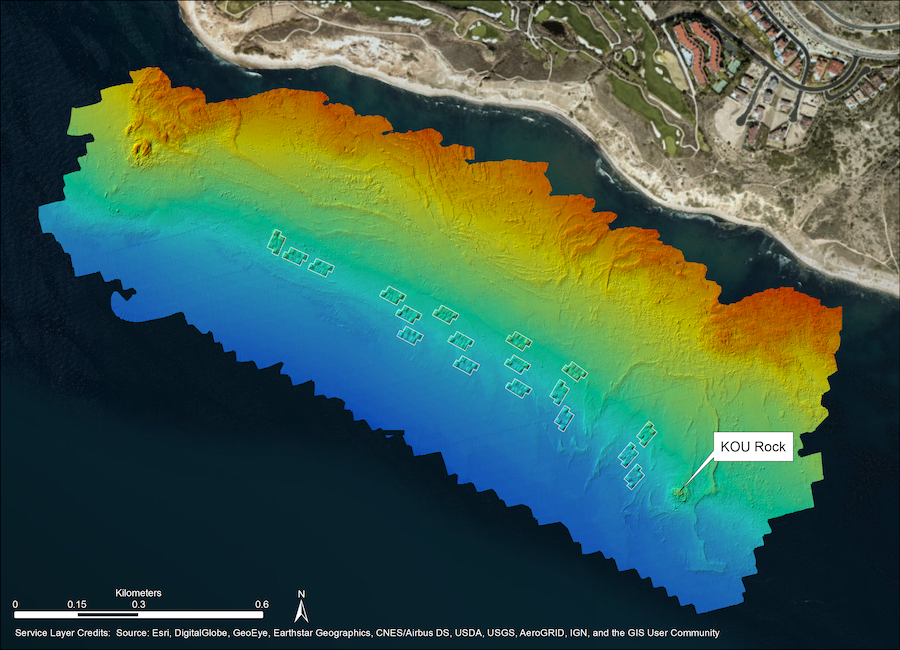 Construction of the Palos Verdes Reef concluded on September 22! Here is a look at a shaded relief image of the new reef. We've started our baseline monitoring surveys and are  already seeing a lot of fish and invertebrates, including kelp bass, sheephead, and lobsters, starting to aggregate at the new reef site. 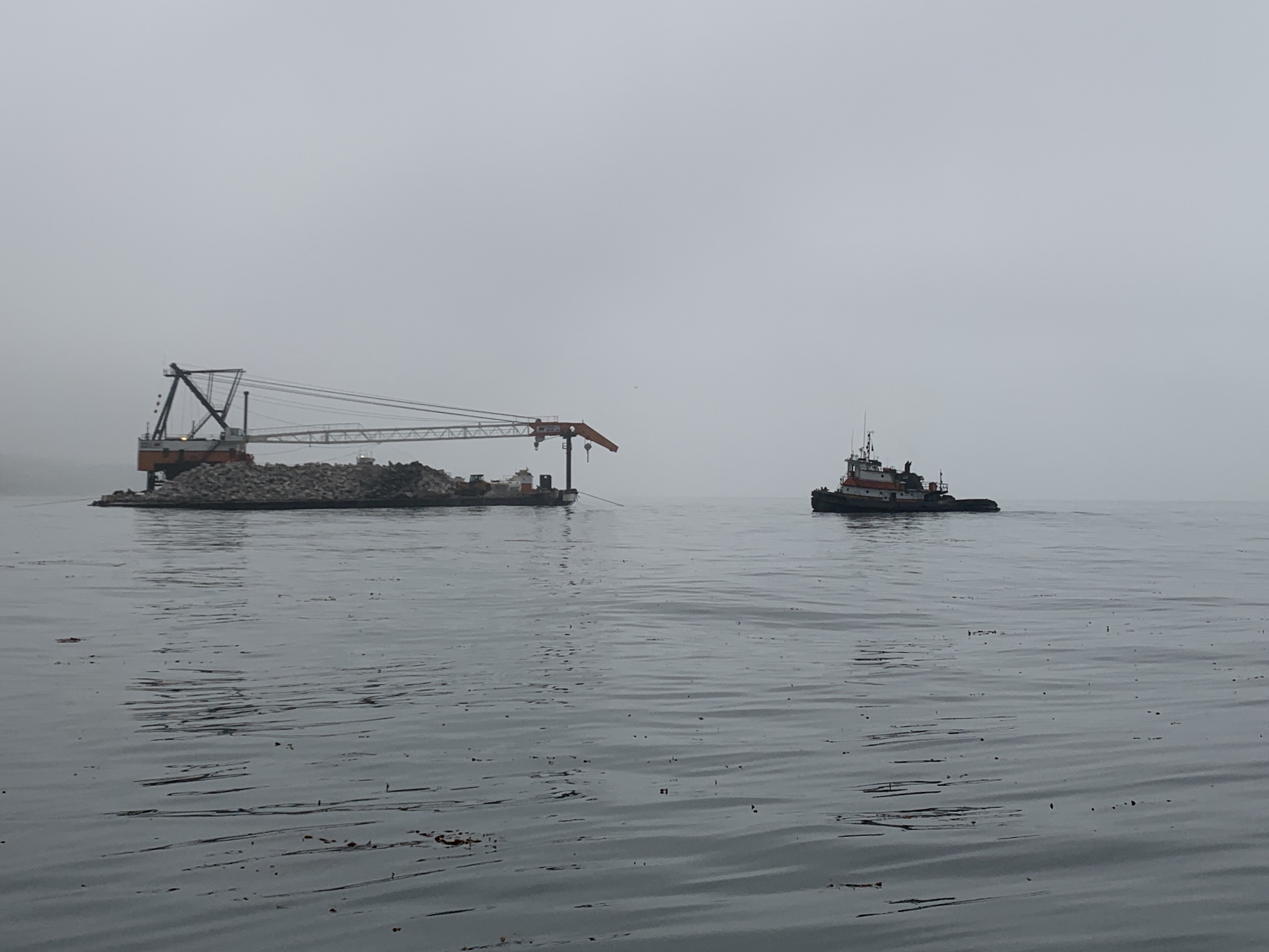 Derrick Barge Long Beach has been hard at work over the last couple weeks and completed all of Blocks 5 and 6. After a much needed break for Labor Day weekend, construction on Block 7 starts again tomorrow. The crane and barge of new rock should arrive on site mid-morning and rocks will be dropping again by early afternoon. Construction has picked up pace and is on-track to be completed before the end of the month. 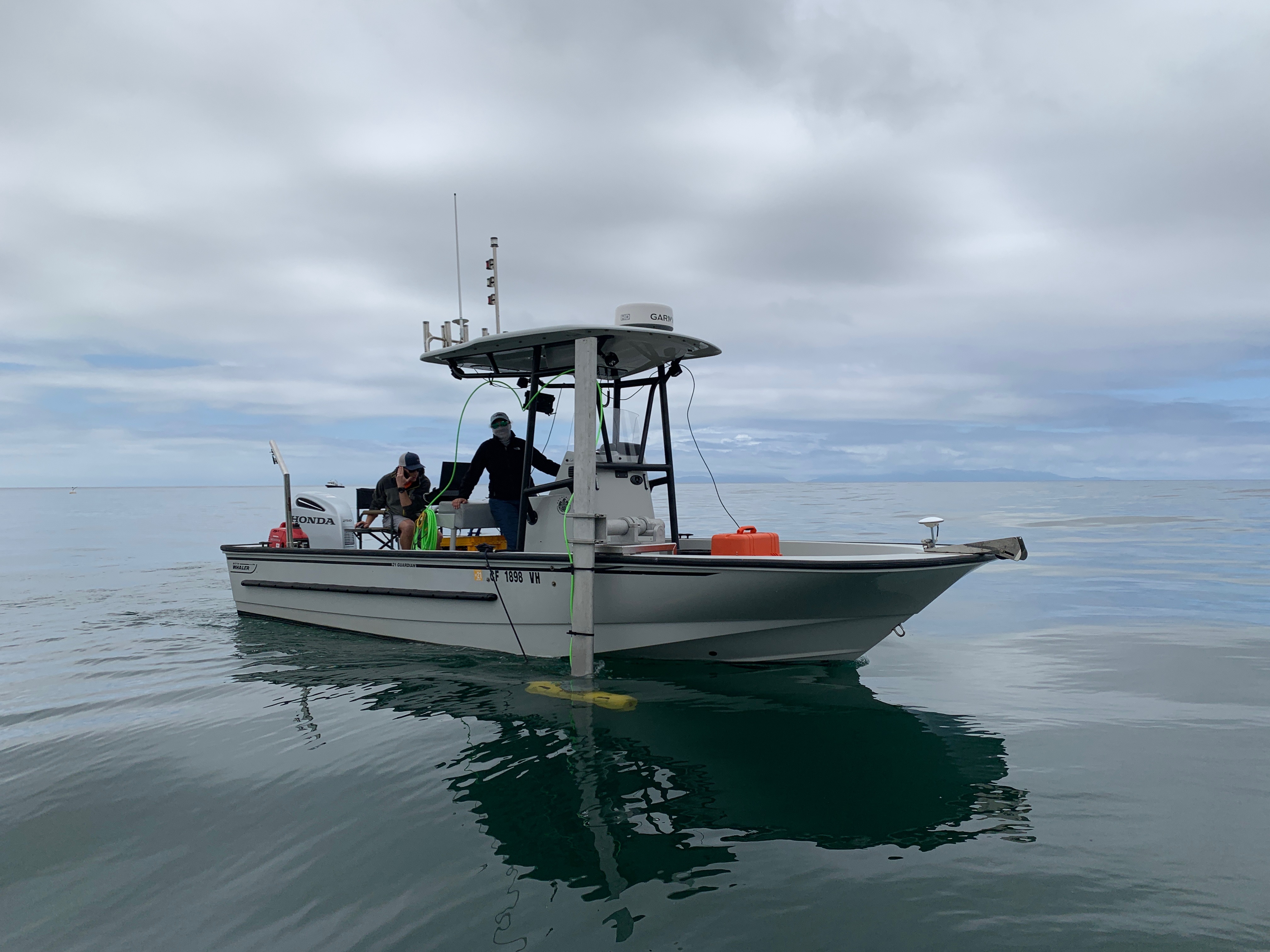 The barge is back and the second phase of construction is planned to start this week. The Connoly Pacific team will be finishing up the final 10 by September 30th. During the construction hiatus we dove the new reefs and collected sidescan and bathymetry data. For more information on this phase of construction, check out this article from Palos Verdes Peninsula News. 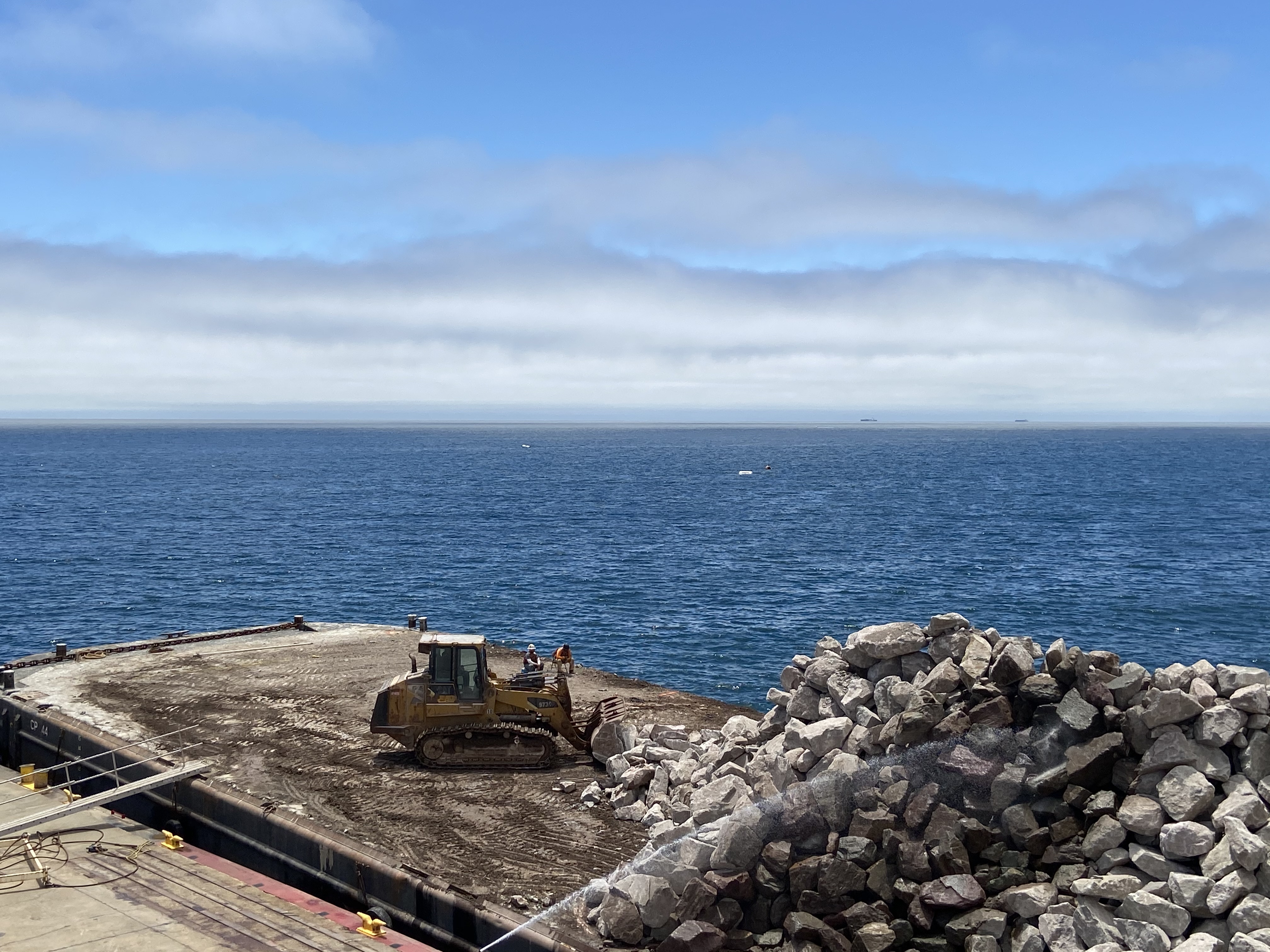 All of Block 2, all of Block 4, and about half of Block 5 were completed during this phase of construction. Connoly Pacific is taking a break to work on Wheeler North Reef in San Onofre. Construction of the final 10 modules will begin in early September and the reef will be completed by September 30th. In the meantime, we'll continue to do sonar surveys to monitor sediment/rock movement. 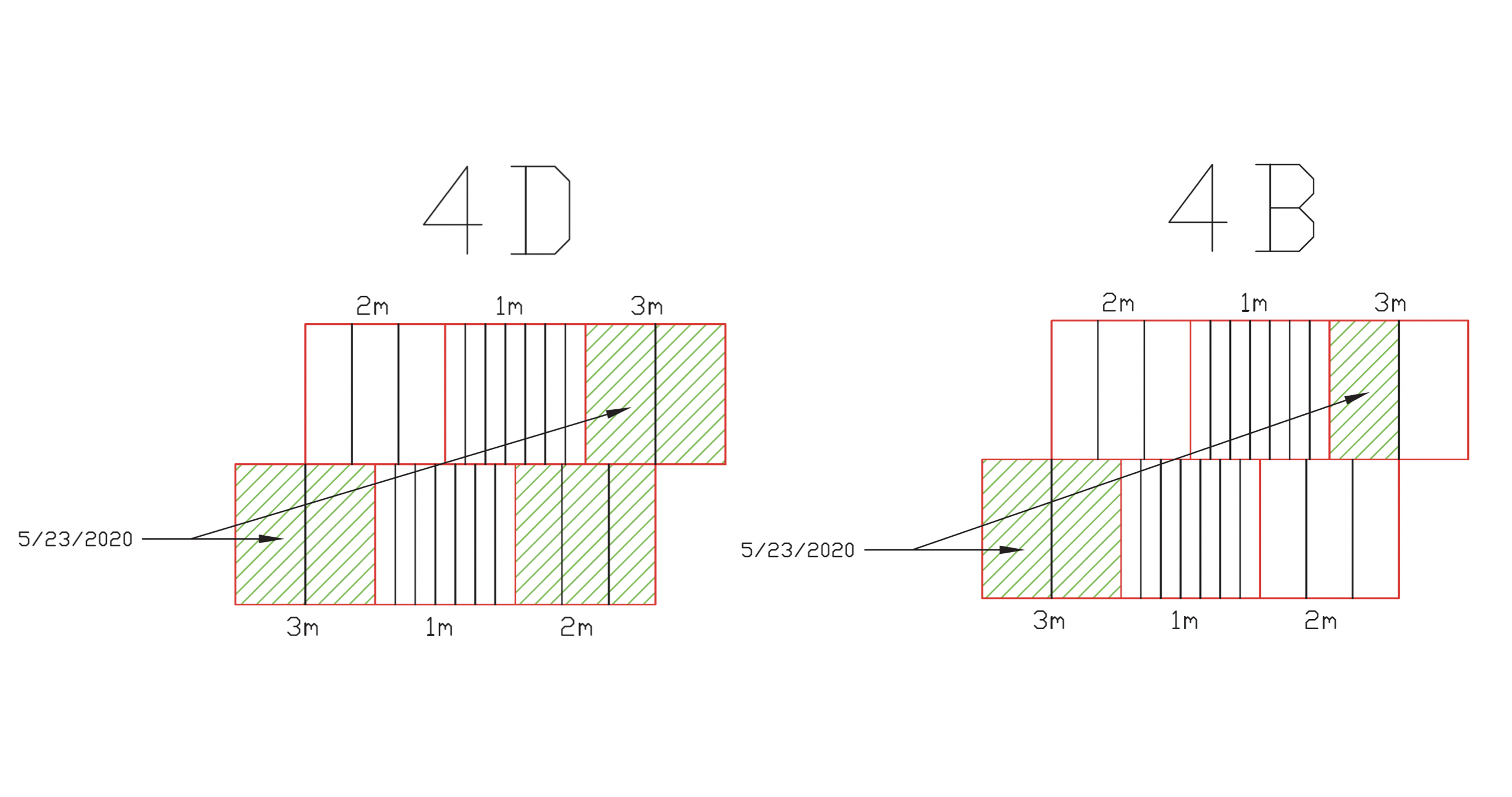 Construction was on hold the past few days due to the crane on DB Long Beach needing to be serviced. They are back at it tomorrow and will be working on Block 4. 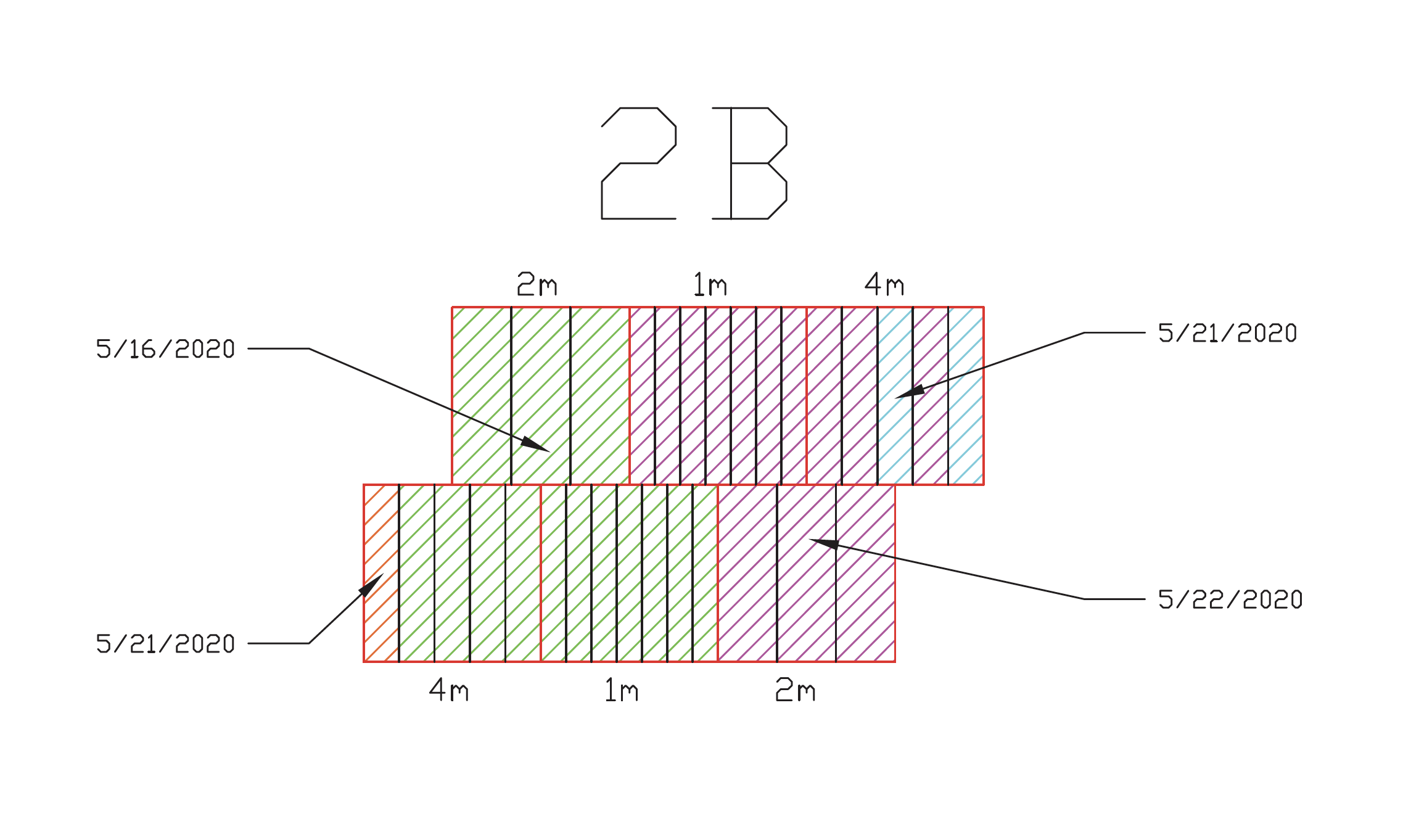 Yesterday was a good swell day (we've been told it isn't so much the height as the direction and period that causes issues), and Connolly Pacific Co. made some serious progress! All of Block 2 is now complete. 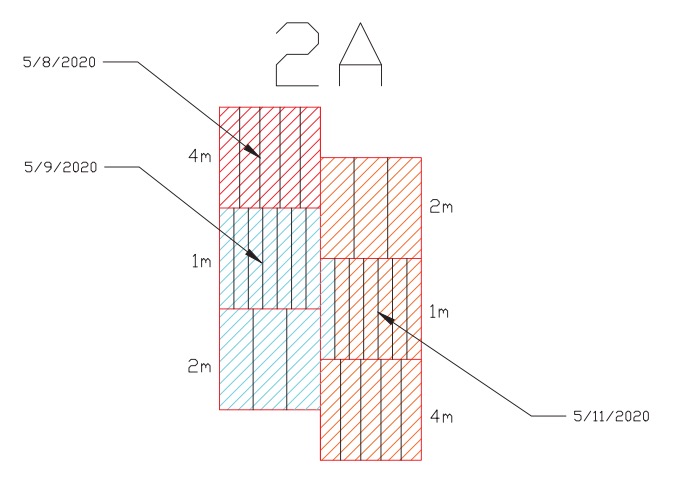 Construction has been on hold for a few days due to sloppy seas and high winds, but we hope it will continue this weekend. There are set levels of wind and swell that cannot be exceeded for reef construction to occur – too harsh of conditions can lead to construction errors, injuries, and potential environmental hazards. Safety comes first! 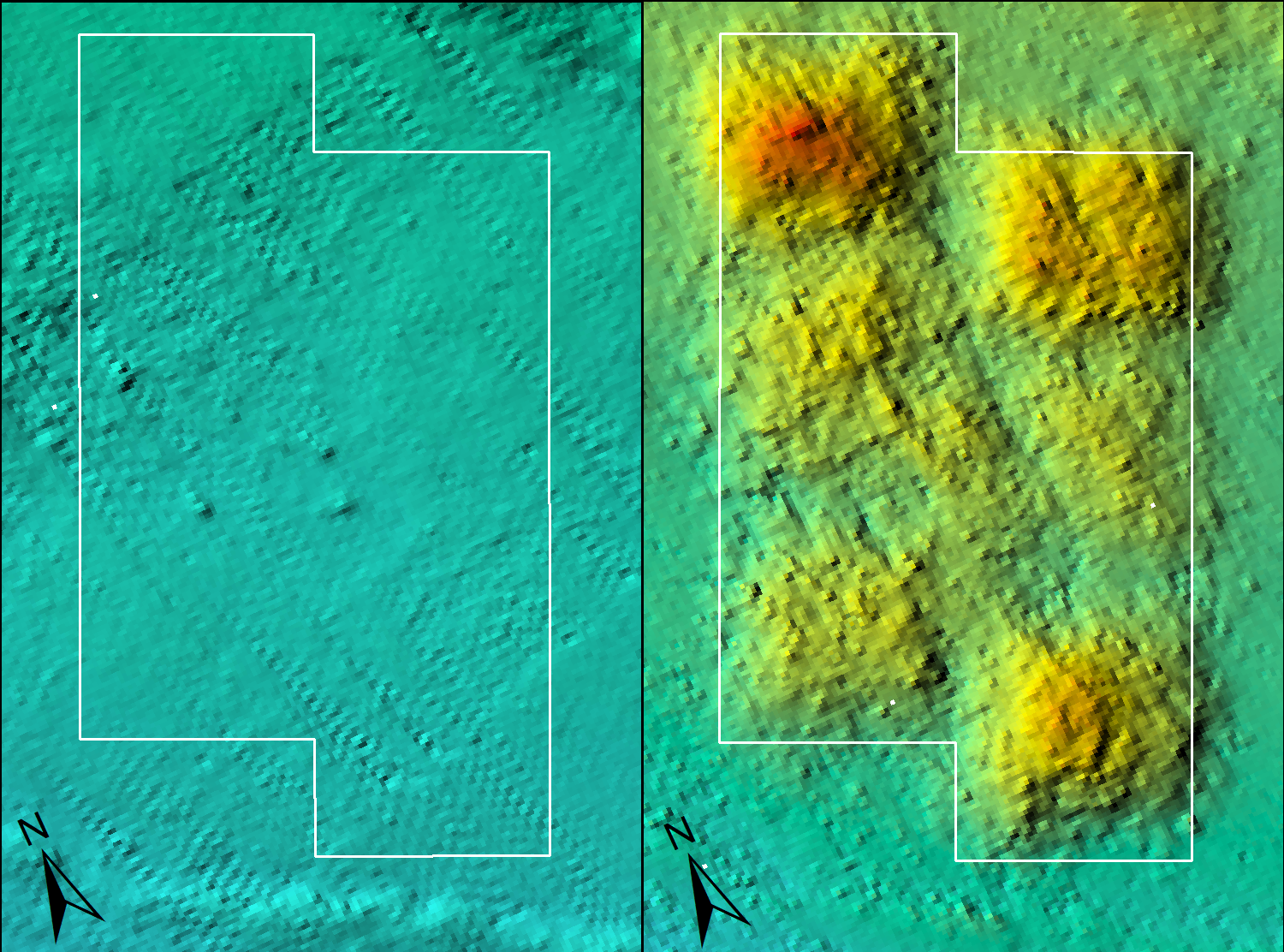 We completed our initial construction audit of block 2A, which comprised of sidescan sonar and mutibeam bathymetry and a dive survey for photos, videos and measurements. Here you can see shaded relief imagery from bathymetry before (Oct 17, 2019) and after (May 12, 2020) construction. Hello reef! 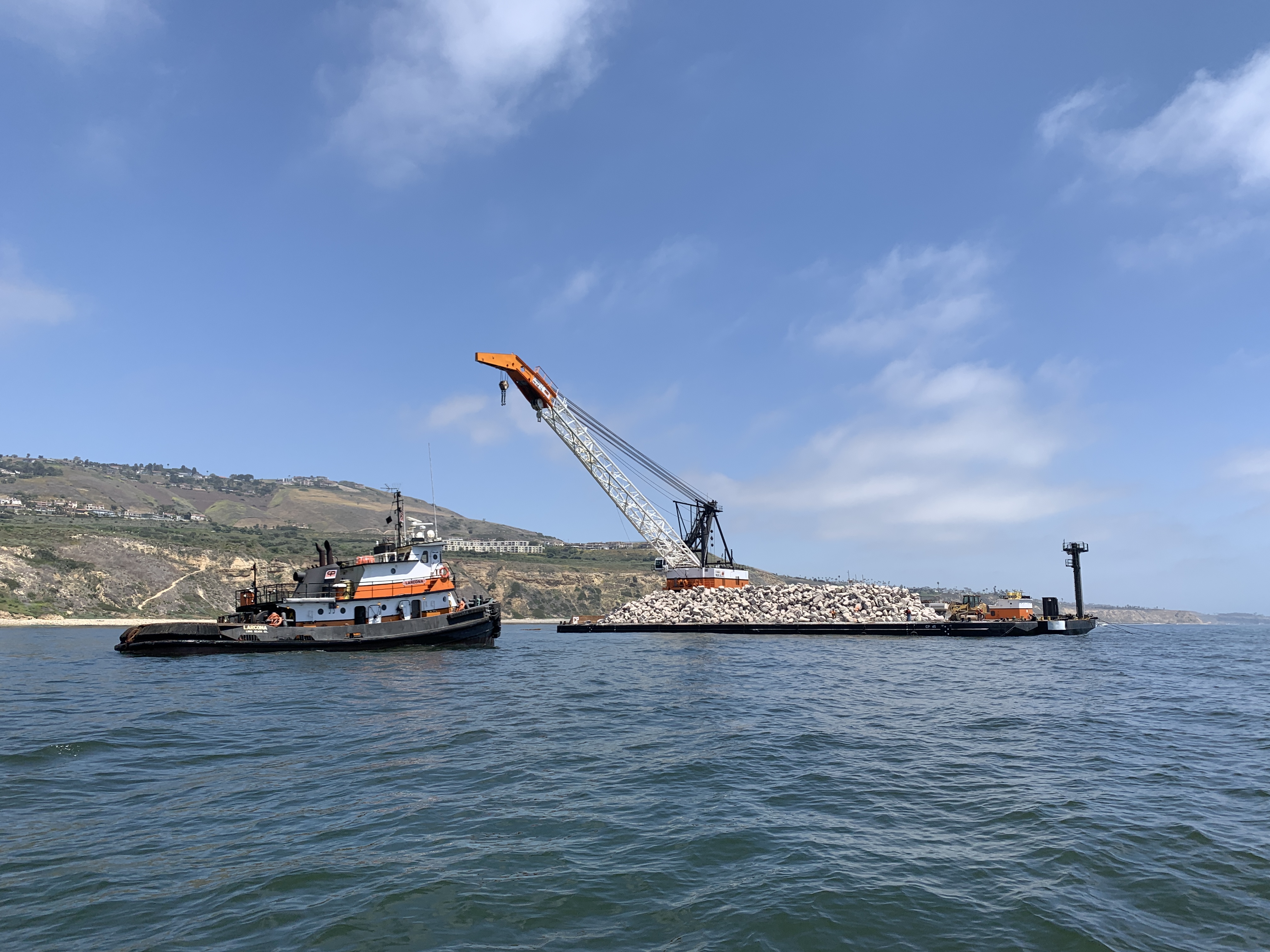 We were on site at 11am and watched the tugboats pull the rock barge over to the main barge, and crane the front loader into place. The construction crew had a survey vessel on site to ensure proper placement and the front loader pushed the first rocks into the water just after 1:30pm. Video of the first rocks dropping can be seen on our Twitter page. After the first block is complete, we will verify construction via dive survey and sonar. 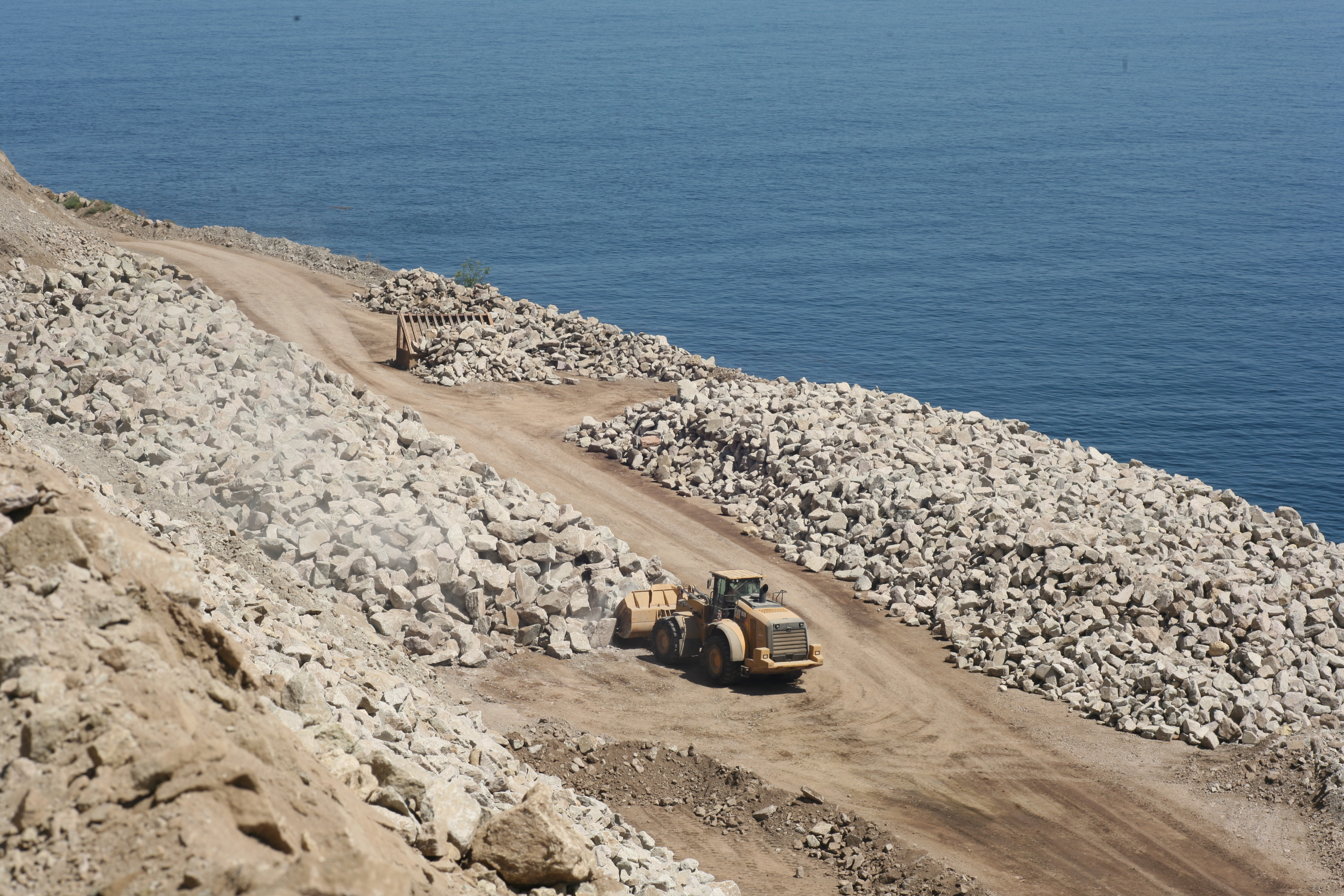 We visited the quarry at Catalina Island that is providing 70,000 tons of rocks that will be used to construct the Palos Verdes Reef. The rocks are being loaded onto a barge and reef construction will officially begin at noon on Friday, May 8th!

Notice to the Public (US Army Corps of Engineers)