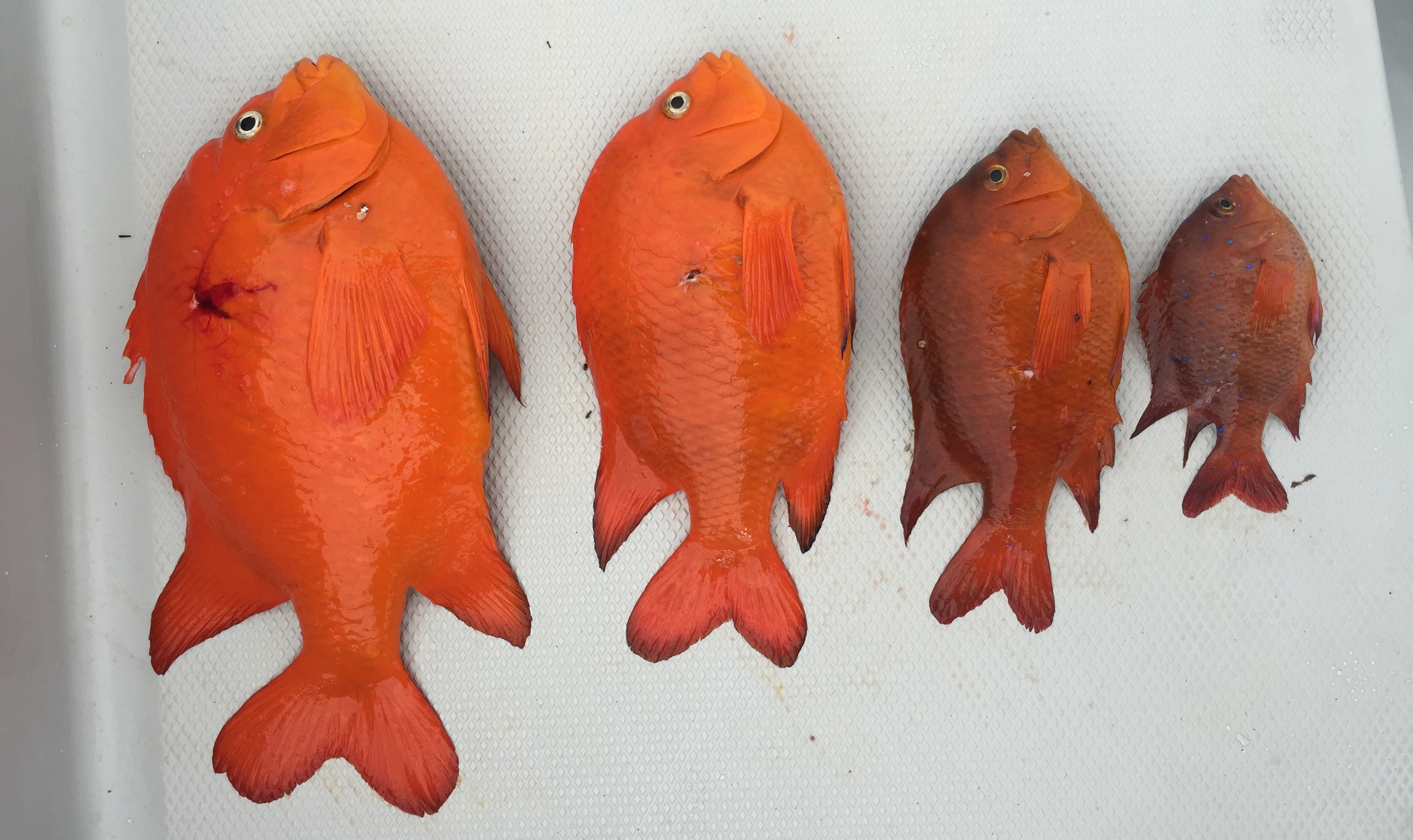 We are currently working on life history projects for the following species:

Life history parameters for fishes have generally been applied to species across their entire range, however,varying ecological and environmental processes (e.g., sea surface temperature, habitat, primary productivity, fishing mortality, resource availability) may influence life history patterns at smaller spatial scales. By focusing on a historically protected species, we determined how environmental and ecological factors are shaping patterns in growth and longevity, without the impact of fishing. The Garibaldi (Hypsypops rubicundus) is a territorial marine damselfish native to the shallow reefs of the Southern California Bight, which encompasses the coastline from Point Conception, CA to the U.S.-Mexico Border including the mainland and an eight-island archipelago, known as the California Channel Islands. The Southern California Bight has a unique current circulation pattern which, when coupled with the complex bathymetry, results in strong abiotic gradients and diverse microhabitats, providing a prime location to study how variability in environment and habitat shape life history patterns. Garibaldi were collected from five mainland locations and five Channel Islands throughout the SCB. Paired natural and artificial reef habitats (i.e., breakwaters and jetties) within each mainland location were sampled. Otolith-based ageing and biological data from these populations were used to assess how age and growth vary by location, reef type (natural/artificial), island or mainland, mean annual sea surface temperature, and/or sex. The annual formation of growth increments in otoliths was validated using tetracycline mark-recapture methods to confirm that increments are formed annually. Garibaldi grew larger on artificial reefs than on natural reefs but tended to live longer on natural reefs. Regionally, growth and longevity patterns followed mean annual sea surface temperature gradients, supporting Bergmann’s rule. Males grew larger than females in all populations, which is uncharacteristic for both damselfish and other fish from the region. The Garibaldi collected for this study had a maximum age of 57 years, which makes them the longest lived of any damselfish by two decades.

California corbina, Menticirrhus undulatus, are a common but poorly studied species of croaker found in the surf zone from the Gulf of California to Point Conception, California. While protected from commercial fishing since 1915, corbina are the target of a robust recreational fishery and are considered a prized catch by surf and pier anglers. The most recent attempt to determine life history parameters of the California Corbina was made in the 1960s, when Joseph (1962) used annuli determined from scales to age over 2,000 fish. There is considerable evidence suggesting that scale annuli consistently underestimate age across a number of fish families. Age validation studies have shown that otolith annuli tend to provide more accurate age assessments than scale annuli (Sipe and Chittenden 2002). This study aims to build on the findings of Joseph (1962) and contribute to the knowledge of the life history of the California Corbina by examining otolith annuli, and using age-at length analyses combined with morphometric and abundance data.