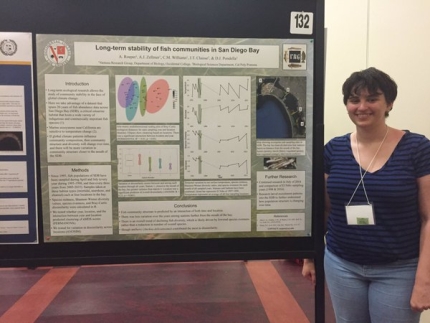 Bay and estuarine fish commonly use eelgrass as shelter from predators or a flat surface on which to lay eggs, which could potentially mean that fish will be more numerous in areas with eelgrass as opposed to those without. The purpose of this project was to determine whether vegetated areas in San Diego Bay had a greater species richness and biodiversity of fish than non-vegetated areas. To accomplish this, samples of fish from four ecoregions of the bay were taken in April and July of this year and were combined with data from previous years up to 2005. The current and historical data was then analyzed using multivariate data evaluation tools in the statistical package R. Although vegetated sites had slightly greater richness overall than non-vegetated sites, the difference was not great enough to be significant. Furthermore, there was no noticeable difference in biodiversity between the two sites, which contradicts previous studies on eelgrass in other locations. An ANOSIM showed that while vegetation did not greatly correlate with the dissimilarity (measured using Bray-Curtis index) between sites (R = 0.02), their geographical location as determined by station number did (R = 0.3). A BIOENV test determined that temperature differences between the stations were likely a greater factor in determining fish composition. Finally, SIMPER was used to determine the top five fish species contributing to dissimilarity between the stations: topsmelt (Atherinops affinis), slough anchovy (Anchoa delicatissima), giant kelpfish (Heterostichus rostratus), shiner perch (Cymatogaster aggregata), and arrow goby (Clevelandia ios). This suggests that San Diego Bay provides a unique gradient of multiple habitat types that are ideal for a wide composition of fish.