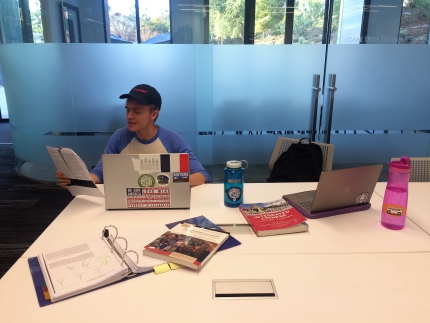 My college goal was always focused and centered around the liberal arts but big into resources and opportunities.

I wanted to continue to learn holistically about the world but was unsure if there were any smaller schools out there that provided opportunities comparable to those of larger schools. Then I found Occidental, which checked off all the boxes and specifically had a program called InternLA that helps Oxy students gain internships in its location of Los Angeles. Among other reasons, including its Diplomacy and World Affairs program, this all sounded perfect for me.

Coming into Oxy, I knew that InternLA was generally for upperclassmen so I wanted to be as prepared as possible throughout my first year. During orientation, I went to an info session about the Hameetman Career Center, or HCC, on campus and I remember my mom telling me, "Ooh Johnny you need to build a relationship with them," so I did, and it’s been one of my best decisions so far. Not only has it been helpful in terms of my career, but thanks to Oxy’s welcoming and tight-knit community, it was so easy to do so. The staff have all the time necessary for students. All you have to do is go in the Career Center, even if it’s just to study (disclaimer: there’s just the right amount of background noise).

The HCC is incredibly prompt and informative in sending students emails with everything they need to know, so aside from forming relationships, I heard all about events through email. There’s a huge emphasis on using the resources at the Career Center, and showing how effective they’ve been for past students. That’s when I found out about the Career Development Program, HCC 100: Ascend. New in Spring 2018, it is designed for first-year students, introducing them to the foundational career-readiness principles required to pursue opportunities during the summer after their first year at Oxy.
This four-session series engages students and helps to build confidence and trust, while exposing students to the early phases of career development. From preparing a well-written college resume and cover letter to exploring majors and career paths, the program has been helpful and also allows students to be eligible to apply for paid internships through the HCC’s internship programs.

Although not many specifics were given about InternLA itself, there was so much encouragement to start preparing early. For me, that was a big factor, as many other schools either don’t mention internships at all or only do so for juniors or seniors, so this was really refreshing and motivating to get started. One specific exercise we did in Ascend was an online questionnaire to find out your own strengths and weaknesses and how to encourage or work on them.

I remember one question being: "You would want to sing in a rock band if you could" which I of course put a smiley face to, because if the opportunity was there, who wouldn’t take it? This experience helped me to learn that I am creative with entrepreneurial qualities and someone who dislikes conformity.

Alongside preparation, the HCC also encourages exposure. I have a specific interest in international education, so learning about Oxy’s relationship with the UN through the HCC was invaluable to me. I’ve also joined Azúcar, Oxy’s Latin Dance Club, which exposed me to Latinx music. To learn about and support another culture matches up with my academic interest in international education and my extracurricular interest in dance, and is something so easily found on campus. These experiences make me more aware of how other people see the United States and in turn all comes together in the experience I see for my future. Shout-out to Onma, Claudia, Julia… they all deserve a promo for their continued support. These are real people who will take the time to read and give feedback on resumes and cover letters. So when you get to Oxy, utilize the HCC, take part in the Ascend program, and get a little closer to finding your niche on campus. I promise you won’t regret it.