Diary of a College Athlete 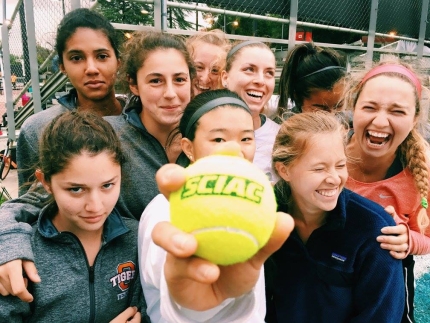 As I lie in bed, my eyelids just barely wide enough to make out the image of the sun breaking free from the mountaintops, I shoot a glance at my alarm clock. Its blaring sound quickly gets me up and going, for I know that if I allow it to ring for much longer, I will disturb the peaceful hibernation of my roommate.

Nestled like a baby bear in her soft, cotton comforter, she, the non-tennis player, has the luxury of sleeping in for a few more hours. In many ways you may believe she was the lucky one; I know some mornings I do. However, playing college sports means compromise––sometimes in the form of sleep. But one thing is for sure: joining the women’s tennis team at Oxy was the best decision I have made as a student thus far.

When I first came to Oxy, I had my heart set on school and school alone. I was ready to be academic and was convinced that in order to do well I needed to devote all my time to it; I worried that playing a college sport would distract me from my studies. But just months into my first year of four hard-working years to come, I realized that I was missing something really important in my life, something I didn’t realize I needed until it was gone: a community of support and like-minded, determined individuals. Having played tennis in high school, I wondered and worried what the tennis scene would be like at Oxy and if it would give me what I needed. However, upon stepping foot on the tennis courts, I quickly discovered my missing piece.

As a student-athlete, my academic and social life changed significantly. Not only did I improve my tennis game season after season, I also learned to juggle a heavy course load, work, an internship, and a sport—all at once. But I wasn’t alone. My teammates and I all shared a similarly hectic schedule, and the amount of support we provided one another is a feat that continually goes unmeasured. The integrated support system and community at Oxy enables all students, whether you’re an athlete or not, to adapt and live well in the busy schedules everyone seems to have.

If you are interested in participating in collegiate athletics at Occidental, give it a shot! Oxy’s student athletes are driven, academically inclined, and physically determined. Even though I LOVE sleep, I am proud to devote my extra time to Occidental tennis. It has truly enhanced my college experience, and I can only imagine it will do the same for you.