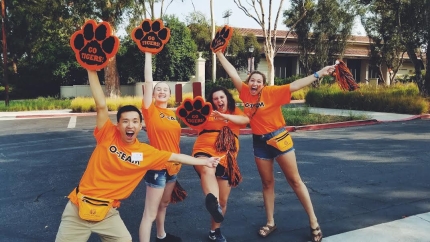 Heyyyyyy Tigers/potential new Tigers/Tiger parents/people just browsing the Internet who happened to come across this wonderful page. It’s me, Matt, and I’m baaack! With another school year starting, what better way to start off the Student Voices blog than informing y’all about one of the best experiences of my life, O-Team! To paraphrase Drake, O-Team O-Teaaaammmmm; we do a lot of cheers when we in O-Team! If you inserted those words into the verse of Drake’s song, One Dance, you’re most likely singing along to it right now, as you should be.

What is O-team you ask? O-Team stands for Orientation Team and consists of a group of current Oxy students who volunteer to help lead orientation for new students. Y’know, those super spirited people in orange shirts and matching fanny packs chanting mostly gibberish at the top of their lungs? Yeah, that’s us. We arrive at Oxy about a week before orientation begins, and immediately start training and bonding. Although leading discussions with nervous, shy, and quiet incoming first-year students is always fun, the most meaningful part for me was bonding with all of my fellow O-Team leaders!

To be completely honest, O-Team is by far the best decision I’ve made since coming to Oxy. The best decision. Like buying four boxes of Mochi from Trader Joes best decision (if you’ve never eaten Mochi, first of all what are you doing with your life, second, stop reading and go buy some). Not only did being an O-Team leader open my eyes to so many ideas I had never even thought about, it also allowed me to meet some of the best people I think I will ever come across in my life. Because O-Team is a volunteer experience, everyone who is there wants to be there. O-Team training is no walk in the park. We train for about twelve hours a day, and spend almost every second with the same fifty or so people. Let me tell you, there are only so many people that I can spend twelve hours a day with. Surprisingly enough, I never once got sick of a single person. I don’t really know how, but these people instantly became some of my best friends. To be completely honest, I’m kind of a weird person, but I felt like being weird was like a requirement. We embrace the weirdness, and I freaking love it. People smeared jelly all over themselves at one point and it was the best thing I’ve seen all year. On the first day of orientation, we had to wake up at like 4AM. Normally, I would probably "accidentally" sleep through my alarm and show up two hours late. But oddly enough, I was so excited to wake up and spend the next 19 hours with my favorite people on campus.

Looking back, O-Team taught me how to be a great leader, mentor, and overall person. But what I am the most happy about is that it taught me how to be a great friend. I know I didn’t talk much about orientation itself, but if you’re at Oxy, or you’re coming to Oxy, you’ll see what it’s like so no worries. I honestly believe that if you want to better yourself in every way possible, you should apply to O-Team. I have to finish by giving a huuuuuugeee tiger paw shoutout to Rai, Amy, and Bella who planned all of orientation, and were basically our parents during training, you da best. Also, if you were on campus during orientation and were woken up by our cheering at 7AM, I’m not sorry at all because those cheers are the ish. Thanks for reading, and join O-Team! Io Triumpheeee!!!