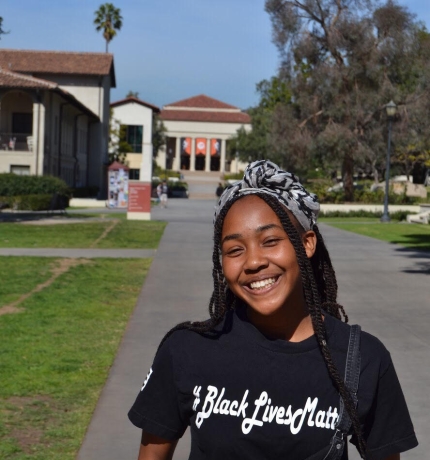 When I initially came to campus, the Black Student Association didn’t have a large presence, so me and a few of my friends in Pauley would get together in my room to talk about issues we faced both currently and growing up.

We talked about it so much that we came up with this idea of "The Black Hair project" about Black hair at Oxy. At first it was just a way to spend our weekend, doing it to just do it. Then after showing a few people, it ended up being a huge project that was showcased in Choi Auditorium on campus. The video includes students at Oxy answering a set of questions related to their hair and experience growing up. I really enjoyed being a part of all of it. This event raised awareness on campus and definitely kickstarted the revamping of BSA at Oxy.

Now, I’m the Vice President of BSA and throughout the year the club plans events for Black students on campus including open mic nights where students come together to share outside of BSA meetings; these nights are always really powerful. It’s just one space on campus where Black students can come together and feel empowered. I personally prefer to talk about issues of race and gender but other people like to read poems, or sing, or whatever moves them. At one open night I distinctly remember listening to a poem written by a non-black supporter of BSA and being extremely impressed, it was very well received. We encourage everyone to come and contribute a voice; different perspectives are always welcome. We keep up to date with current issues, and support other communities whenever possible. For example, when the scandal went down at Cornell University, we were quick to show our support.

We also always try to organize events where people come in to speak or perform. Earlier this month, we had Kuumba Lynx come to Oxy! Kuumba Lynx is a Chicago-based organization which "is committed to the lives of youth using urban art and performance to cultivate strong communities built on a foundation of love." Jacinda Bullie and Jaquanda Villegas performed a two woman poetry show and the next night they hosted an open mic night with KOXY, Oxy’s student-run radio station, so anyone who couldn’t catch the show could tune in and listen.

From open mic events to Apollo Night (we even have the tree trunk to rub for good luck, details are important), we also do volunteer days. Recently we all went to Good Shepherd Center for the homeless where we sorted out the boxes of shoes, clothes and toys for the kids, which was fun. Our board meets once a week to discuss what we’d like to see more of, less of, etc. We also have general body meetings for anybody that wants to be in BSA, and allies are, of course, welcome. Last semester we held a Black Art show, which showcased artistic photos of the Black students at Oxy, including videos and art pieces created by anyone who wanted to participate. It was held in the Bengal room, which was a huge success!

As it is Black History Month, this month we’ve been particularly active. The art show is currently being re-displayed in the library entrance. In thinking of events for this month, I just thought we’ve got to get the Oxy community pumped and excited, ready and open to learn about Black culture even more. And so I thought, what if we just do a rally? We originally planned on having microphones and people were going to say, "This is why my black is beautiful: ___." But instead, we all congregated in front of Wylie with a big sign, all wearing black, and I lead the rally with two chants: "Say it loud, I’m Black and I’m proud," and "When I say Black, y’all say beautiful," and so on. We marched around our quad with many allies joining in for the second chant. It was still as powerful as personal testimonies as the rally happened to coincide with Oxy’s involvement fair on the quad, so a lot of campus got to witness it.

Although the Black student population at Oxy isn’t huge, it’s definitely a space where I’m able to express my culture, and even more so now that I’m in BSA that promotes racial unification. I also really like that Oxy has a multicultural residence hall, as living in Pauley shaped my first year at Oxy. It’s where I met my closest friends who are POC (people of color) and where the Black hair project began. I would definitely encourage individuals of color to choose to live in Pauley.

Upcoming events for BSA include Apollo Night, and teaming up with the African Students Association to do a screening of Black Panther. Currently we are all discussing Kendrick Lamar and SZA’s music video for their song "All the Stars"—super powerful and very appropriate for this month. These kinds of discussions are widespread throughout Oxy, so even when I haven’t had time to look on social media, I can count on the Oxy community to not only tell the story, but discuss the implications of events. It’s definitely an environment of continuous learning and thought-provoking scenes, wherever you find yourself on campus!