From Oxy to Washington, D.C. 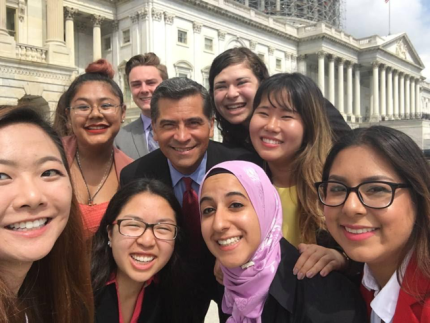 I am  back on campus and drowning in Comps preparations and midterms, and I can't help but look back on one of best summers of my life. This summer, I interned in the House Democratic Caucus on Capitol Hill, which serves every Democratic Member of the U.S. House of Representatives. The Caucus organizes the Democratic members of Congress in order to accomplish a Democratic agenda on the Hill.

As a Politics major, working on Capitol Hill and serving all of the House Democratic members was the perfect internship for me and I was specifically drawn to this office because of the chairman, Xavier Becerra, who represents the congressional district that Oxy is in! I specifically interned in the press office of the Caucus and I didn’t know what to expect as I had never studied communications before. However, I learned so many important skills for my future career and had so many incredible experiences through this internship.

On a day-to-day basis, I filmed and live-streamed several briefings and events that House Democrats hosted and participated in, compiled news clips every morning and afternoon to send to the House Democratic offices, transcribed interviews of the Chairman, and I completed various other tasks.

My favorite responsibility was filming and editing videos of House Democratic members. Our office had a recording studio where Members came to record video messages to share with their constituents so I interacted with House Democrats on a daily basis. I felt so fortunate to have this opportunity because while most people get excited when they see celebrities, I become star struck around House Democratic Members of Congress.

One recording that stood out to me this summer was when Representative Mike Honda (CA-17) spoke with my co-intern and me for 20 minutes after his recording to ask about our lives and discuss other random things.

Another special moment occurred after a recording of Representatives Derek Kilmer (WA-6) and Cheri Bustos (IL-17). Later that day, I passed Congresswoman Bustos in the hallway and smiled at her, not thinking she would remember me. However, she smiled back at me and thanked me for recording her video earlier that day. It was a special experience to know that a Member of Congress had remembered me despite meeting many others in her extremely hectic day.

Beyond these cool responsibilities, I also got to attend several incredible events. While I was in D.C., Senator Chris Murphy (D-CT) filibustered on the Senate floor for 15 hours and House Democrats took over the House floor for 24 hours to fight for a vote on gun safety legislation. I had the opportunity to sit in the House gallery for hours and watch the House Democrats give inspirational speeches on the importance of gun safety legislation. Working in the Caucus, I had the opportunity to hear former Secretary of State (and hopefully future President *knock on wood*) Hillary Clinton and Senator Bernie Sanders (I-VT) speak to House Democrats. (Fun fact: Secretary Clinton said good morning to me and I may have cried a little). I was also a part of two selfies that went viral (see above) and I live-streamed an event that Laverne Cox from "Orange Is The New Black"attended!

Overall, I have had one of the best summers of my life. I’m excited to be back at Oxy for my final Fall semester of my undergraduate career, but it was hard to leave my incredible internship and Washington, D.C. I am very grateful to have received a grant from the Hameetman Career Center’s (HCC) InternAway program, which gave me  the opportunity to take advantage of an unpaid summer internship and receive a stipend so that I  could afford living in Washington, D.C. I already miss D.C., but I know I will somehow find my way back here after graduation next year.