Meet some of our mathematics majors. 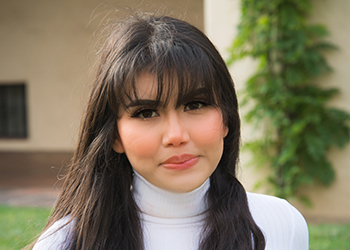 What was your motivation to major in mathematics?

My interest in mathematics stems from my artistic background. At first glance, each subject seems to be the antithesis of the other; but on closer inspection, both share the characteristic of being realized through imaginative synthesis. The skills I learned as an artist—such as turning an abstract thought into something concrete, attention to detail and visualization—have greatly helped me in my mathematics career. I first became deeply interested in mathematics when I learned about the usage of ratios, symmetry and geometry in Renaissance art, but my interest developed into something larger when I learned about unsolved problems such as Toeplitz’s Conjecture.

The great thing about going to Oxy is that you have the ability to know your professors personally due to the small size of the school. Professors at Oxy always have their doors open and are eager to help, whether it’s with homework or advice on applying to graduate school. I met my mathematics advisor, Professor [Gerald] Daigle, by walking into his office (without being enrolled in one of his classes!) and discussing research opportunities. A standout class I’ve taken has been “Discrete Mathematics” with Professor [Gregory] Tollisen. His enthusiasm for the subject can be clearly seen in every lecture, and as the mathematics expert for Oxy, he is always willing to help with any math homework you have.

Here at Oxy, I’ve worked with Professor Daigle in researching non-minimal factorization in numerical semigroups. During the summer [of 2019] I will be working in the Mathematical Sciences Research Institute in Berkeley, CA, researching problems in applied discrete mathematics and combinatorics.

My favorite thing about studying math is the imaginative process hidden underneath the fabric of the subject. Plenty of times, I’ve felt completely awestruck when reflecting upon the creativity that was needed to succeed in proving a theorem. Moreover, problems often demand that you think about the logical consequences of a theorem or axiom, and that in itself is an exercise for the imagination.

What are your career plans or ambitions post-Oxy?

I plan to enroll in a Mathematics Ph.D. program immediately following my undergraduate career and work in academia. As a liberal arts school, Oxy has opened my interests and allowed me to utilize my mathematical thinking in other fields of study. A unique part of the Oxy curriculum is the CSP program, in which freshmen take writing seminars on a topic of their interest. After taking CSP 57 with Professor Klausmeyer, I saw the overlap between mathematics and philosophy, which encouraged me to take more philosophy classes. Without the liberal arts approach, I would not have found my love for philosophy, and more importantly, my range of academic interests would not be as wide.

When first studying math, it may seem as if the subject is solely grounded on rote memorization of technical processes that result in a numerical answer. However, as the subject becomes more complex and abstract, these processes vanish. The most important advice I have for a mathematics student is to go to office hours! Meet with your professors frequently, ask plenty, plenty of questions, and make sure you understand every theorem and its proof until you have the ability to replicate it yourself. Most importantly, be curious about the material that you learn—always! 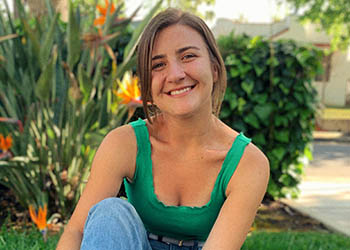 What was your motivation to major in mathematics? Was there a specific inspirational experience?

I came to Oxy with a hunch that I'd want to study math, but without really knowing what that meant at the college level. In the fall of my junior year, I studied abroad through the Budapest Semesters in Mathematics program, which is uniquely rigorous and 100% all math, all the time. More than ever before, I became certain that I'd chosen the right major. I saw what it means to seriously pursue math, and returned to Oxy with a newfound drive and appreciation for our own math community.

I absolutely adore the math faculty at Oxy. What are meant to be quick trips to the math offices often turn into entire afternoons spent chatting and laughing with whatever subset of the math community happens to be around. My favorite Oxy math courses have been “Discrete Mathematics” (which everyone should take), “Abstract Algebra” and anything taught by Professor [Ramin] Naimi.

I conducted research on Positional Game Theory with my adviser, Professor Eric Sundberg, and fellow math major Ben Pagano ’21. We began our research as an independent study in the spring semester of my junior year and continued on through the summer via Oxy's Undergraduate Research program. Asking new questions and conducting research in math is, I think, an invaluable experience for anyone interested in the subject. It lets you experience the aspect of discovery that is vital to the spirit of math, and is so often missing in standardized math education in the United States.

Though I love going to a school where I can take a really wide range of courses, I always come back to math. I'm continually surprised by the extent to which my math courses inform my understanding, not just in STEM, but also history, religion and philosophy. On its own, besides being profoundly beautiful, math is an incredibly rewarding field of study. The moment that an intricate proof finally clicks in your mind almost feels like you've invented something all over again.

My advice to any new or potential math majors is to take the weird courses! Math as a field is so remarkably multifaceted, and you never know which off-the-wall course might spark a newfound interest or exercise your brain in a totally novel way. Allow yourself to enjoy learning for learning's sake, and often applications will crop up where you least expect them. 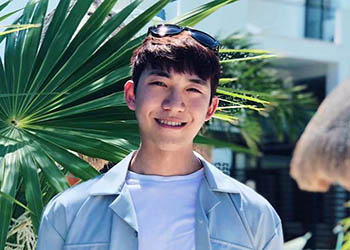 What was your motivation to major in mathematics?

I’ve always liked math since I was a kid, and I enjoyed participating in math competitions. So it was a natural decision to major in math at Oxy.

I work as a TA in “Statistical Data Analysis” for Professor [Tamás] Lengyel, and I have been a grader for several professors. The class “Real Analysis” class taught by Professor [Gerald] Daigle last semester was great for learning and understanding why and how everything we learned up to calculus works.

I am going to take part in summer research at Oxy with Professor [Jim] Brown. The topic is Siegel modular forms, and I am currently learning about the related material since this will be a new area of research for me.

Until calculus, I liked math because there was a correct answer for each problem. But as I take more upper division courses, I realize that math is more about developing logical thinking skills. It can be stressful when you can’t determine an approach to a problem, but once I find one and finish my proof, it’s very rewarding and I like the feeling of gaining more insight.

What are your career plans or ambitions post-Oxy? How has the liberal arts approach helped to shape these ambitions?

I am planning to pursue a Ph.D. in math after graduation. At Oxy, I improved my communication skills and gained more confidence overall. A lot of professors here are caring and helpful. In my freshman year, when I felt very alone, I had a long chat with Professor Lengyel, who understood my difficulties as an international student. Since that time he has always encouraged me, especially to pursue and study math more deeply.

If you decide to be a math major, you will have more insights when you take courses from other departments, too. Approach your professors and ask them if you can be involved in any of their research, or ask them for help with a research topic. Take advantage of being in a small school.