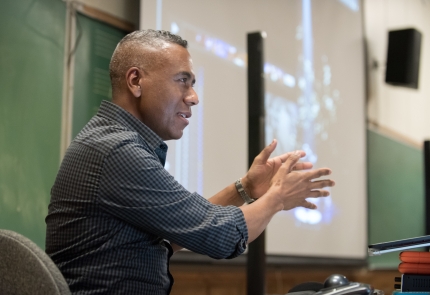 To support the launch of our new Music Production program, we are hosting industry professionals in a series of guest lectures with funding from the Mellon Foundation and a new affiliation with the Grammy Museum. On Thursday, February 8th, Kevin Antunes shared his experience arranging Michael Jackson's music for Cirque du Soleil's Michael Jackson ONE and discussed his role as musical director, including a rare look at the multi-track for Human Nature. Antunes has served as musical director and keyboardist for some of the biggest events in the music industry, from the Super Bowl XLVI Halftime Show to the tours of Justin Timberlake, Rihanna, Britney Spears, and Madonna, who he has worked with for over 10 years.

After the lecture, Antunes engaged with students in a brief Q&A, followed by a catered reception in the Booth Hall courtyard, where students had the opportunity to continue the conversation in a casual setting. Students were also able to mingle with several professional musicians and colleagues of Antunes who came to support his lecture.