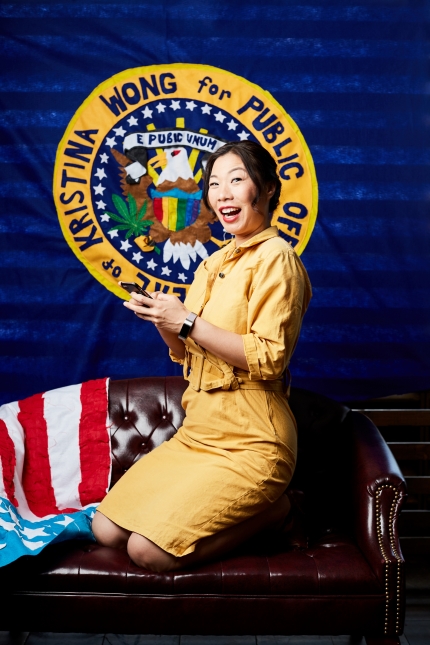 Kristina Wong was featured in the New York Times’ Off Color series “highlighting artists of color who use humor to make smart social statements about the sometimes subtle, sometimes obvious ways that race plays out in America today.” She is a performance artist, comedian, writer and elected representative who has been presented internationally across North America, the UK, Hong Kong and Africa.  She’s been a guest on late night shows on Comedy Central and FX, and an actor on film and TV. She starred in her own pilot presentation with Lionsgate for truTV. Her commentaries have appeared on American Public Media’s Marketplace, PBS, VICE, Jezebel, Playgirl Magazine, Huffington Post and CNN. She’s been awarded artist residencies from the MacDowell Colony, New York Theater Workshop, the San Diego International Airport and Ojai Playwrights Festival. Her work has been awarded with grants from Creative Capital, The MAP Fund, Center for Cultural Innovation, National Performance Network, a COLA Master Artist Fellowship from the Los Angeles Department of Cultural Affairs, eight Los Angeles Artist-in-Residence awards, and Center Theatre Group’s 2019 Sherwood Award. She’s created viral web series like How Not to Pick Up Asian Chicks and just launched the second season of the award winning Radical Cram School.  Her rap career in post-conflict Northern Uganda is the subject of her last solo theater show The Wong Street Journal which toured the US, Canada and Lagos, Nigeria (presented by the US Consulate).  Her long running show Wong Flew Over the Cuckoo’s Nest looked at the high rates of depression and suicide among Asian American women and is now a concert film.  Her newest performance project is “Kristina Wong for Public Office”– a simultaneous real life stint as the elected representative of Wilshire Center Koreatown Sub-district 5 Neighborhood Council and rally campaign show.  That show’s national tour was sidelined by the pandemic and has pivoted to streaming performances.   Kristina’s current pandemic project is the Auntie Sewing Squad, a national network of volunteers sewing masks for vulnerable communities.  The experience of erecting this remote factory in ten days at the start of the pandemic is the subject of Kristina’s current performance “Kristina Wong, Sweatshop Overlord” which she is developing as a New York Theater Workshop Artistic Instigator.