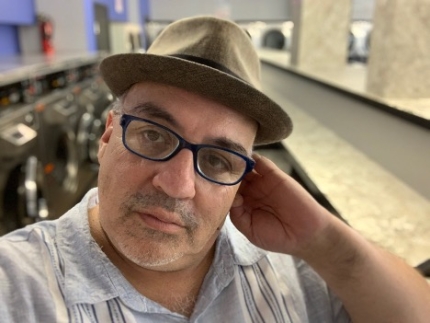 Luis Alfaro is a Los Angeles born and raised Chicano writer known for his work in poetry, theatre, short fiction, performance and journalism. Luis spent six seasons as the Playwright-in-Residence at the Oregon Shakespeare Festival (2013-2019) and a member of the Playwright’s Ensemble at Chicago’s Victory Gardens Theatre (2013-2020). He has been associated with the Ojai Playwrights Conference since 2002. He has had multiple productions at the Magic Theatre in San Francisco, The Public Theatre in New York and Playwrights’ Arena in Los Angeles. Luis is the recipient of a MacArthur Foundation Fellowship. He was most recently awarded the PEN America/Laura Pels International Foundation Theater Award for a Master Dramatist, The United States Artist Fellowship and the Ford Foundation’s Art of Change Fellowship. His plays and performances include Electricidad, Oedipus El Rey, Mojada, Delano and Body of Faith. Luis spent over two decades in the Los Angeles poetry community, and toured North and Latin America as a Performance Artist. He is a professor at the University of Southern California. An anthology of his plays, The Greek Plays of Luis Alfaro, was released in September by Methuen Drama/Bloomsbury Press, and licensed by Dramatists Play Service, Inc. He currently holds commissions with Denver Center, Geffen Playhouse, South Coast Repertory and Victory Gardens Theatre. He is currently part of the artist collective at Center Theatre Group at the Music Center in Los Angeles.