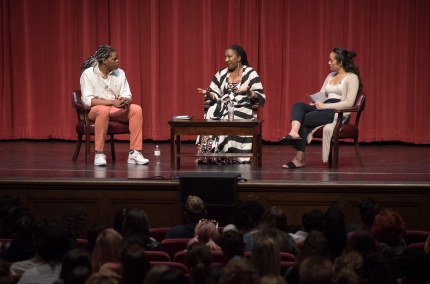 By Natalie Martinez ‘21
Last Monday, Tarana Burke gave one of the most powerful speeches I have seen thus far. She explained in her talk about the story behind the #MeToo movement, a hashtag to unite survivors of sexual assault. She was the woman who started the movement years prior, dedicating her life to social justice. Burke was someone who I deeply admired but did not realize how much it would grow after hearing her speak. Her talk was surrounding the story behind the movement and the hashtag that had become international.
As Burke talked about her work, you could hear the passion in her voice. She stated how we need to focus on survivors, and the necessity to use the term "survivor" not "victim." Burke stated that because sexual violence occurs so often, it is more than an individual issue, it is a community issue. Moreover, she expressed that society continues not to give preference to healing. Burke gives the advice not to focus on the predator, simply the survivor because the movement is about joy, love, and respect. She also reminded the crowd that sexual assault knows no boundaries and that the movement is for all survivors, not just a women’s movement.
During the Q&A, Burke stated her methods of successful organizing. She said, "Everyone has a voice, they just need to be amplified. People need to hear it," which is one of the most important things to keep in mind as a community activist and not to overpower the people who are being oppressed. She embodies a real life role model, someone who is strong, funny, intelligent, beautiful, and caring. These feelings were shared by all across Thorne Hall. Her voice carried strength that assigned the crowd one thing: to be advocates and share her message and don’t let the misconceptions about the #MeToo movement continue.