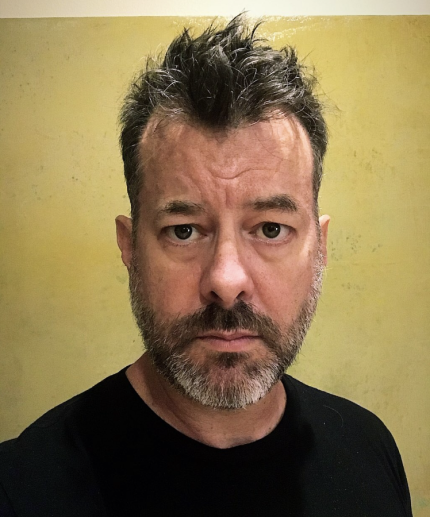 Michael John Garcés is the artisitic director of Cornerstone Theater Company, a community-engaged ensemble based in Los Angeles.

Directing credits at the company include Native Nation (commissioned and presented by ASU Gammage) and Urban Rez by Larissa FastHorse; California: The Tempest by Alison Carey; Plumas Negras by Juliette Carrillo; Café Vida by Lisa Loomer; Making Paradise by Tom Jacobson, Shishir Kurup and Deborah Wicks La Puma; and What Happens Next by Naomi Iizuka, A La Jolla Playhouse "Without Walls" production in association with Cornerstone Theater Company. Plays he has written for Cornerstone include Magic Fruit, the "bridge" project of the multi-year Hunger Cycle which brought together the many communities of the cycle; Consequence, out of story circles with students, teachers, administrators and parents in South Kern County; Los Illegals, created in residence with communities of day laborers and domestic workers; and The Forked Path, a collaboration with Stut Theatre and the Van der Hoeven Kliniek in the Netherlands, which was performed at the Net Even Anders Festival in Utrecht and The International Community Arts Festival in Rotterdam. Outside of Cornerstone, Michael has developed and directed several works by Marc Bamuthi Joseph: the just and the blind, with composer Daniel Bernard Roumain (Carnegie Hall and The Kennedy Center), /peh-LO-tah/ a futbol freedom suite (premiere at Yerba Buena Center for the Arts, subsequently at the Museum of Contemporary Art Chicago), red, black and GREEN: a blues, in collaboration with artist Theaster Gates (various venues including The Brooklyn Academy of Music and REDCAT), and the break/s (premiere at Humana Festival and The Walker Arts Center). Directing credits at other theaters include Seize the King by Will Power (The Alliance); Larissa FastHorse's The Thanksgiving Play (The Geffen Playhouse); The Royale by Marco Ramirez (Arizona Theatre Company); Epic by Elen Struve (The Great Plains Theatre Commons); and Wrestling Jerusalem by Aaron Davidman (premiere at Intersection for the Arts; other productions include The Guthrie Theatre, Cleveland Public Theatre and Mosaic Theatre). His full-length plays include south (Great Plains Theatre Commons), THE WEB (needtheatre), points of departure and customs (INTAR Hispanic American Arts Center) and Acts of Mercy (Rattlestick Playwrights Theater); as well as a solo performance, agua ardiente which ran Off-Broadway at The American Place Theatre as part of "Dreaming in Cuban" and short plays include Las Llamadas (24 Hour Plays: "Covid & Incarceration"); americanas (Mixed Blood Theatre and MACLA - "DJ Latinidad's Latino Dance Party"), A Parable (Great Plains Theatre Commons), hymn in three parts (Chalk Rep), tostitos (EST Marathon of One-Act Plays), on edge and the ride (Humana Festival), and audiovideo (The Directors Project). He collaborated with composer Alexandra Vrebalov on the oratorio Stations, which received its premiere at the Rhode Island Civic Chorale and Orchestra and was also performed at the NOMUS Festival in Novi Sad, Serbia. Michael is a recipient of the Princess Grace Statue, the Alan Schneider Director Award, the Rockwood Arts and Culture Fellowship, a TCG/New Generations Grant, the Non-Profit Excellence Award from the Center of Non-Profit Management, is a Southern California Leadership Network Fellow and a proud alumnus of New Dramatists. He serves as vice president of the executive board of SDC, the theatrical union for stage directors and choreographers.