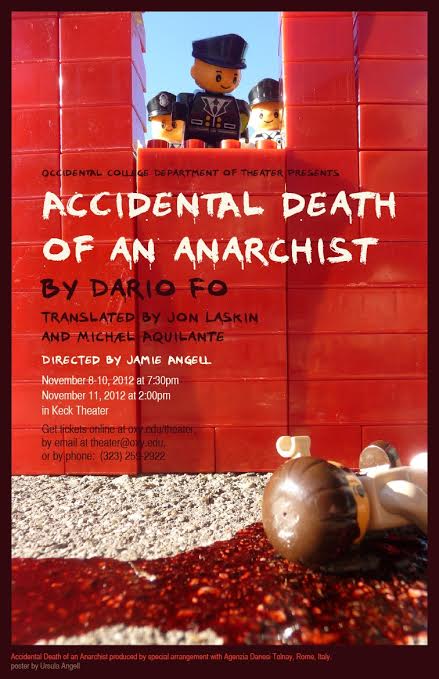 A suspect in a bombing has mysteriously fallen from a fourth floor window. What follows in Nobel Laureate Dario Fo’s brilliant farce includes government corruption, police brutality, transcripts of the trial, impersonation of a judge, and an investigative journalist - all in this hysterical and biting commentary on the nature of justice and human behavior. 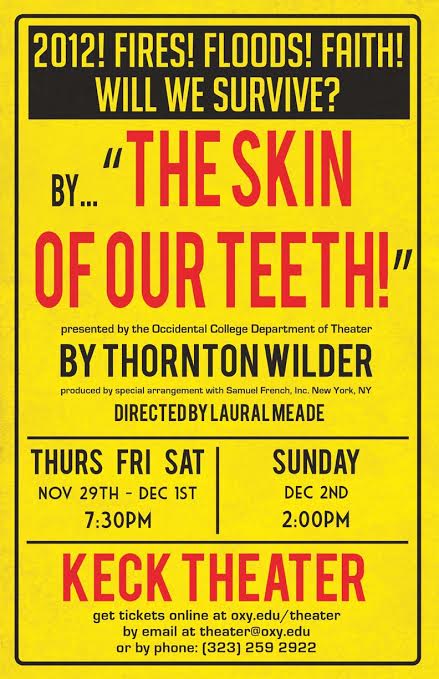 Seventy years ago in the midst of World War II, Thornton Wilder’s “groundbreaking satiric fantasy" premiered on Broadway with a cast including Talullah Bankhead and E.G. Marshall. The Skin of Our Teeth “follows the extraordinary Antrobus family down through the ages from the time of "The War," surviving flood, fire, pestilence, locusts, the ice age, the pox and the double feature, a dozen subsequent wars and as many depressions.  Ultimately, they are the stuff of which heroes and buffoons are made. Their survival is a vividly theatrical testament of faith in humanity."
"Wonderfully wise...A tremendously exciting and profound stage fable."-Herald Tribune

Photo by Marc Campos
Check out more production photos here!
The Skin of our Teeth program 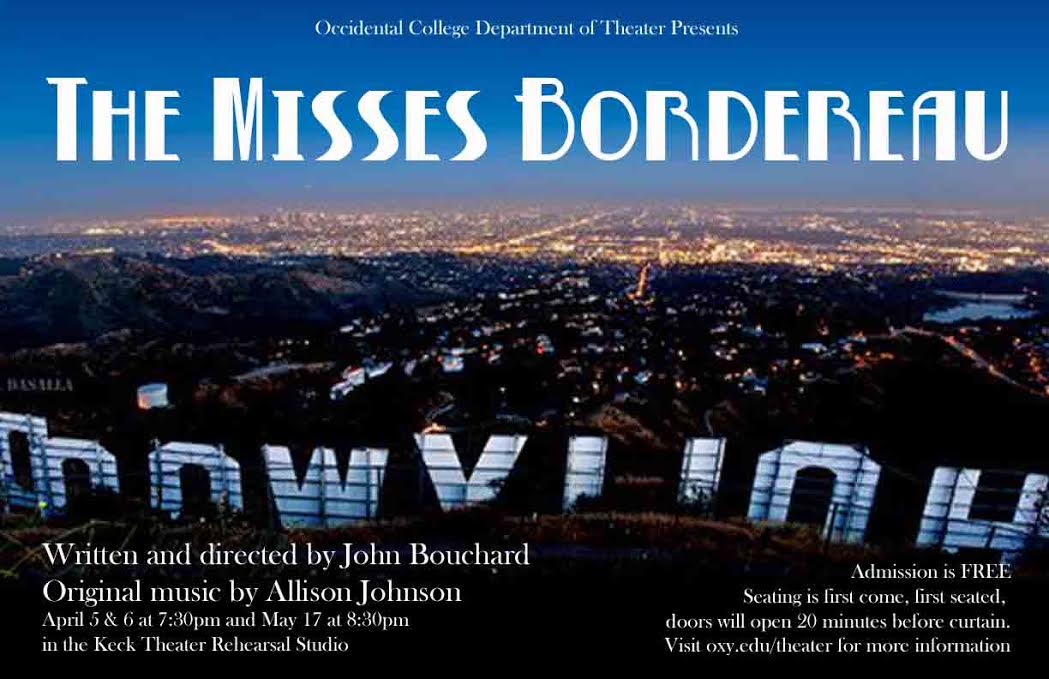 written and directed by John Bouchard

A tale of obsession and possession. In 1937, Jake Broyles, a young professor, traces the lost letters and papers of Gerald Clarke—the celebrated writer who many years before had died in his thirties—to Hollywood: to the house of Clarke’s now ancient former lover and her young ward. In The Misses Bordereau, Jake Broyles moves into their house, hoping to find some way to pry from the women the Clarke treasure. What he discovers is a treasure that casts a spell tumbling him into a landscape just out of time—somewhere between the lost years of Gerald Clarke and present, glittering, Los Angeles; somewhere between the fictions of Adolph Zukor and a reality as strange as fiction. 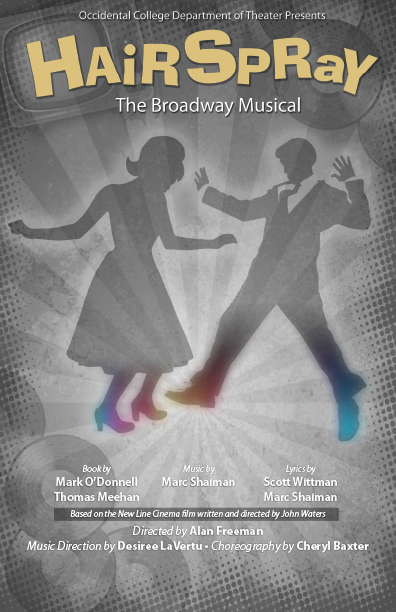 The world of the '50's is changing, television is going from black and white to color, and Baltimore dance fanatic, plus-sized teen Tracy Turnblad wins a place on a local TV dance show and becomes one of the "Nicest Kids in Town." Her exuberance bubbles over, but when she learns that she's not the only one who "some people" want to keep away from the cameras, she sets out to turn Civil Wrongs into Civil Rights, so that everybody at the party can dance together on screen.

HAIRSRPAY, The Broadway Musical is John Waters’ cult film turned into the hit Broadway musical comedy of the new millennium. The winner of 8 Tony awards, 9 Drama Desk Awards, and 4 Olivier Awards, this show introduced some of the most popular Broadway tunes of the last twenty years, including: "Good Morning Baltimore", "I Can Hear the Bells", "(The Legend of) Miss Baltimore Crabs", "Welcome to the 60’s", "Big, Blonde, and Beautiful", "(You’re) Timeless to Me", "Without Love", “You Can’t Stop the Beat!"

The Flying Karamozvou Brothers in 4 Play

Expect the unexpected with The Flying Karamazov Brothers in 4 PLAY. The self-proclaimed eccentric ‘lunatics’ spice things up with a zany showcase filled with laugh-out-loud comedy,  wild theatrics, and astonishing juggling feats,  that have taken them to Broadway, television, and the big screen. Formed at UC Santa Cruz in 1973, The Flying Karamazov Brothers describe themselves as ‘multi-faceted new-vaudevillians at the apex of their ambidextrous and alliterative ability.’

But, they are not your father’s wild-haired, flame-throwing, juggling, kilt-and-tutu-wearing performers. The Chicago Reader says, “The Flying Karamazov Brothers’ show is so much fun that anyone you take to see it will want to go to be with you." And, the Wall Street Journal says: “The Karamazovs deliver visual and verbal one-liners, all while creatively tossing about anything they can get their hands on!"

Presented by the Department of Theater and the G. William Hume Fellowship for the Performing Arts

The juggling lesson will bring participants up to the level of juggling three balls and also teach more advanced tricks and techniques to anyone who already juggles. The improv/clown section of the workshop will focus on creating safe fun ways to expand playfulness and allow for spontaneity in theatrical comedy. Depending on interest, the workshop may also include any of the following: a look at the rhythm in juggling, collaborative rhythm games, guided collaborative music challenges, Karamazov-Style Brain Bending exercises and a talk-back session about life on tour.

Monday, September 24, 2012 at 5:15pm in Keck Theater
Light refreshments will be served following the conversation

Join us in Keck Theater as Jim leads a lively conversation with Tim about his vision and strategies to fulfill the mission of Playwrights Horizons: “encouraging new work of veteran writers while nurturing an emerging generation of theater artists."  What is the importance of culture in creating a lasting record and a stimulating presentation of our human identity? How and why are creativity and breadth of knowledge central to a complete education? The audience will be invited to join the conversation.

Tim Sanford is the Artistic Director of Playwrights Horizons, a writer's theater dedicated to the support and development of contemporary American playwrights, composers and lyricists, and to the production of their new work.  Beginning as a literary intern in 1984, Tim went on to serve for nine years as Literary Manager and two years as Associate Artistic Director, before assuming leadership of the theater in January 1996.

He is a past President of The Literary Managers and Dramaturgs of the Americas and a contributor to Dramaturgy in American Theater.  He has a B.A. from Occidental College and a Ph.D. in Dramatic Literature from Stanford University.

The Stage Combat workshop will focus on the basic skills necessary for effective unarmed or hand-to-hand combat for the stage. Students will learn a choreographed fight with a partner that includes slaps, punches, kicks, chokes, rolls, and falls. The workshop will finish with student presentations of their fight to their peers and invited guests.
This workshop is supported by Remsend Bird Funds

Introduction to Writing for Television with Dan Dietz

In this workshop, students will receive an introduction to the everyday work of the television writer. They will be taught the basic structure of TV drama, and participate in a simulated Writers Room, where students will generate an idea for an episode of television and “break story." Please note that students should come ready to collaborate and vocally participate.

Dan Dietz is the inaugural Guest Artist in Residence for the Edgerton Program in Theater through which Oxy students benefit from residency activities with artists in residence at our partner theaters, A Noise Within and The Theatre @ Boston Court. Dietz's new play, American Misfit, is receiving its world premiere production, directed by Michael Michetti at The Theatre @ Boston Court (April 4 - May 12, 2013).

In addition to his work as a playwright, Dan is currently a writer for the CBS drama, Person of Interest. We are pleased that, through the Edgerton Guest Artist Program, Oxy students can benefit from both aspects of Dan's career: in the workshop described here and in a post-show discussion on April 12, following the final preview of American Misfit.

Let's All Be Married by Omar Paxson

Three couples, married 10, 25 and 50 years, converge in a comedy that explores love, equality, and companionship. Compromise comes in unexpected ways while old prejudices are broken and new kinds of commitment flourish. Written with the heart, humor and theatricality that marks all of Omar's work.

Sunday, April 21, 2013 at 2:00pm in the Keck Theater Rehearsal Room
Admission is free, however seating is limited and will be first come, first seated.