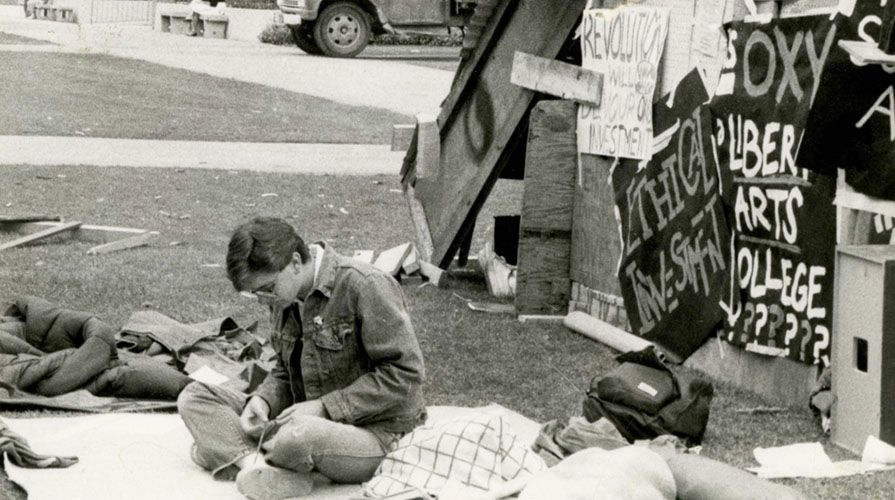 In June, 1990, Occidental’s Board of Trustees voted (by a one vote margin) against divestment from South Africa, rejecting the recommendation made by the Humanitarian Task Force a group of students, faculty and staff chosen by President John Slaughter to study the issue. The vote was a defeat for President Slaughter, who strongly supported divestment.

The Board vote was the result of a long anti-apartheid campaign on Occidental’s campus that began in 1978 with divestment as its primary goal. The campaign involved teach-ins on the quad, a unanimous faculty vote calling for divestment, and a “shantytown” phase. In response, the Oxy Board created a special Committee on Investment Policy (later Social Responsibility). In June, 1978, however, it voted not to divest on grounds of the estimated cost to the College and a preference for using proxy votes to support the Sullivan Principles (a set of rules on how corporations should operate to improve conditions for workers and press for change in South Africa). In addition, the Board expressed its opposition to the College’s acting “as an agent of social change.” The Student Committee Against Apartheid, founded in 1978 by Gary Chapman ’79, with Professors Roger Boesche and Eric Newhall ‘67 P’99 P’06 taking a leadership role on the faculty side, organized teach-ins, and continued to press for a new vote, to no avail.  It was during this period that future President “Barry” Obama 83’ was active in the movement, as he records in his autobiography.

During the 1980s, as protests continued, then President Richard Gilman invited two South African leaders to Occidental: Zulu chief Gatsha Buthelezi (who opposed the African National Congress, or ANC) and pro-ANC Bishop Desmond Tutu. Students kept the now college-wide Anti-Apartheid Committee active. In 1986, a shanty town erected on the quad drew national media attention. In 1987, some graduates, led by Greg Dalton ’86 and Robert McKay ’86, began a “South Africa Free” Fund (Alternative Fund For Occidental College Investments (AFOCI) and AFOCI Scholarship Fund) for alumni who did not want to donate to the College endowment unless they could be assured that their funds would not go to investments in South Africa.

The Undergraduate Research Fund for Corporate Responsibility, an endowed fund, was established in 2002 with the gifts collected for the AFOCI funds.

About the URF for Corporate Responsibility Fellowship

This fellowship supports a student to conduct 10-weeks of faculty-mentored research through the URC Summer Research Program. It is open to all students at the College doing research in corporate responsibility and socially responsible investing.