64 Feet Under the Sea | Occidental College

64 Feet Under the Sea 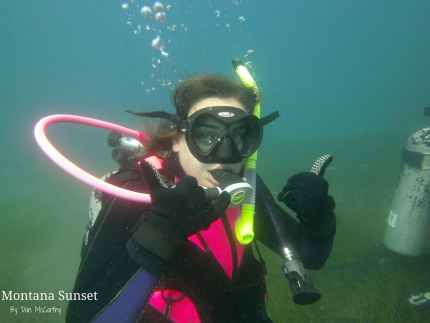 I am suspended in a giant, blue paint can. Or at least it feels that way.

"This is incredible," I say, but all that comes out is a burst of bubbles that lazily make their way to the glimmering surface, some 65 feet above my head. I glance around at the four other scuba divers that surround me. We are all in awe, excitedly making various hand gestures to each other, though as of yet none of us have learned a hand signal for "totally cool!!!"

For the past two weeks, I have been taking a scientific diving course offered through the Southern California Marine Institute with two other Oxy students. We took this course so that we could dive with the Vantuna Research Group (VRG), the research group we belong to on campus, run by Professor Pondella. I seriously can’t emphasize enough how cool the marine biology department is (both the people and the research). Students involved in the research group work on various ongoing projects – from the health of the marine habitat around oil rigs, to sorting and cataloging our vast museum collection of marine fishes from around the Pacific. The VRG regularly does fish population surveys in designated places around the Los Angeles area, and you need to have a special scientific certification, so that you’re experienced enough to collect accurate data.

Which is why I found myself about a week ago suspended in the ocean almost exactly at the halfway point between Los Angeles and Catalina Island, on my first-ever "blue water" dive, one of the several different specific sets of dives we had to practice, which included night diving, search and recovery diving, deep water diving, and, of course, fish population surveying. "Blue water" diving is when you’re diving in an area where the bottom is unreachable, as in this case, where the bottom was some 1,000 feet below us. Like most things we’d done in the class so far, and were going to do, this dive was both terrifying and awesome (but mostly just awesome).

I watched in disbelief as my huge, neon-pink fins (more of a bluish-purple at this depth, since most red light wavelengths couldn’t penetrate this deep) kicked over … nothing. Floating there, I felt a rush of awe and giddiness, the same feeling I’ve always felt when interacting with the ocean. With it came the certainty that as I floated there, I was on the right track. Oxy helped me channel my passion for marine biology, something I’ve always possessed, and show me the multitude of ways I can spend the rest of my life doing the thing I love most – interacting with the ocean. In just over a week I leave for my study abroad program in Australia, where I will have the Great Barrier Reef as my playground for an entire semester. So as I lay there in the giant, blue paint can, I knew that this was just the beginning of something truly great.

Miranda Roethler is a rising Junior, Biology major from Portland, OR. She is a part of the Vantuna Research Group.