Hey everyone! It’s Maddy, back reporting for duty. Since the last time I wrote, I got through my first round of midterms, attended what some would consider a concert (I’d call it a claustrophobic death-trap), discovered that TOGA! TOGA! TOGA! is a real thing, and watched the sunrise shine upon Michael Cera’s beautiful face. So basically nothing out of the ordinary.

In an attempt to procrastinate doing work, I decided to check my Oxy email. Nothing out of the ordinary…movie screening in Mosher…Moodle is experiencing technical difficulties…Festivus celebration…

Wait. What? Other students celebrate Festivus?

It has finally sunk in that I live in a place where people can freely gather around a Festivus pole and air their grievances, a la Seinfeld, without any questions asked. Unfortunately for me, I already bought a ticket to see Occidental’s theater department put on Accidental Death of an Anarchist that night. I guess my feats of strength will have to wait until the holiday’s true date of December 23. Until then, I’ll keep my grieving to a minimum during the play. 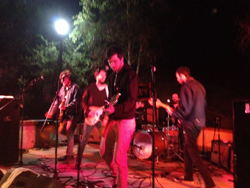 from upper campus to experience them. Just last night, however, my friend and I ventured down from our hilltop fortresses to see two punk bands, Titus Andronicus and Ceremony, performing at Sycamore Glen. Not that I haven’t had the opportunity to go to shows in Los Angeles, but to finally have an on-campus concert where people paid more attention to the music than to the sweaty bodies around them was a breath of fresh air. Am I pretentious yet?

The answer to that last question is ‘yes.’

In other completely relevant news, President Obama was reelected. (I’m getting better at this transition thing, right?) Election day was without a doubt the most incredible day I have had here at Oxy. Sitting in a common room with thirty other people, gathered around the television for multiple hours straight, constantly awaiting each subsequent CNN Projection to arrive was just as nerve racking as it was an incredible communal experience. And then for everyone to 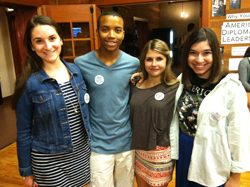 simultaneously make the realization, as President Barack Obama made his speech at the Chicago headquarters, that this man may have once sat in the room where we were now, watching him be reelected as the president of the United States, was eye-opening and simply, for lack of a better word, magical. I consider myself extremely lucky to have experienced such an historical event here at Oxy.

On a more daily retrospective, my friend and I have established "hallway parties" as our way of gaining the Freshman 15 that we are so narrowly avoiding by living on upper campus. 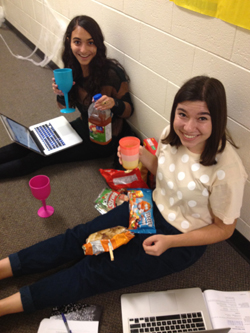 Even the Dutch apple pie cheesecakes in the marketplace aren’t working. I have been buying cake more frequently ever since discovering how much money is left on my meal plan. Which isn’t particularly a bad thing, but I think my stomach may disagree.

It may simply be luck, but the last time I wrote a blog post it was the first cold day of the season. And now, after the hundredth heat wave this fall, we’re smack in the middle of a normal autumn week. I decided to actually plug in my Christmas lights today to set the mood for this romantic date with my term paper. At the rate Southern California is at, we may even get some clouds on Thanksgiving. There’s something to be thankful for. Until then, I think I’ll go leave my rain boots outside to see if the sky lords get the message.