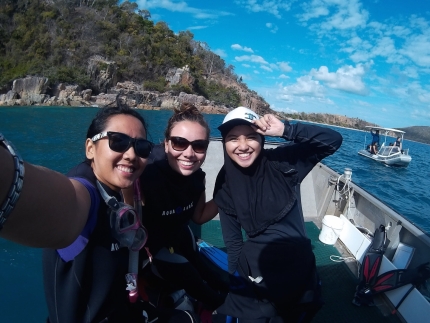 My alarm blasts on at 4:30 am and immediately I know this is going to be a great day. Eyes half-shut, I cram some overnight essentials into my backpack, sling my heavy mesh sack of dive gear onto my back, and trudge out into the pre-dawn with a few of my hallmates. It’s spring break here at James Cook University, in Queensland, Australia, but unlike other exchange students who are going to Bali or New Zealand for the week, we are headed on a field trip.

We pick our way across campus in the dark, ducking to avoid enormous fruit bats still in the middle of their nocturnal hunting. We will take a bus and then a boat away from the mainland, across a channel, past the longest jetty in the southern hemisphere, to Orpheus Island.

Orpheus Island is part of the Palm Island Group, towards the southwestern part of the Great Barrier Reef. Part of a larger national park system running up and down the coast, it is split evenly into a small resort at the southern half, and a research station maintained by James Cook University at the northern half. The station has dormitories, a mess hall, classrooms, and a wet lab. Although it is mostly used by graduate students, several undergraduate classes offer field trips there.

I am absolutely thrilled to be going. After all, the Great Barrier Reef is the reason I chose to study abroad in Australia. Ever since watching Finding Nemo as a kid, I’ve dreamed of coming here. Luckily for me, Oxy has a close connection to JCU, ranked in the top 4% of world universities and one of the leading universities in tropical studies.

5 hours after my alarm went off, I find myself munching on a second breakfast while our professor, Mia Hoogenboom, goes over the plan for the day. On this trip we are collecting data on coral cover and fish populations on several reefs around Orpheus to figure out what affects their population structure. There is an ongoing debate in the scientific community on whether coral reef ecosystems, some of the most diverse and complex environments on the planet, are predominantly controlled through top-down or bottom-up factors (that is to say, is availability of food from primary producers or predation from apex predators the main thing controlling abundance and structure of organisms on coral reefs?) As events like bleaching and hurricanes destroy coral cover and overfishing depletes apex predators, this question becomes ever more important if we are to predict how coral reefs will change in the coming century.

For the next few days, we will be diving and snorkeling in reefs around Orpheus and the surrounding islands, trying to answer this question of who controls coral reefs. We are doing benthic surveys of both coral and fish species. Basically, this involves laying a long measuring tape along the bottom of the reef, and swimming along it, recording all the fish and coral species as we go. Most people are snorkeling, but thanks to Oxy’s dive certification program through the Vantuna Research Group, I have enough credentials to dive. My dive buddies for the weekend are Noora and Hikmah, two masters students from Indonesia.

I am uncharacteristically nervous for this dive. We have a lot of data we have to collect, and we are loaded down with a bunch of extra gear like transect tapes and clipboards in addition to our normally cumbersome dive getup. But as soon as I’m below the surface, my nerves melt away, replaced by awe at the sheer beauty that surrounds me. Giant mounds of coral rise from the sand below me to loom over my head, and tiny, neon-bright fish dart all around me. I can see everything from massive groupers several feet long to tiny nudibranchs the length of my pinkie toe. Everything around me is a living, breathing mass of color and movement. Soft corals sway delicately in the current, and giant clams quickly retract their bodies as I approach. Damselfish a few inches long aggressively defend their patches of coral. A sea snake (luckily not venomous!) cuts a line through the water close enough for me to touch. A jellyfish the size of my pinkie fingernail jets past my facemask. I could spend hours just floating in one spot, observing the overwhelming plethora of life that surrounds me. 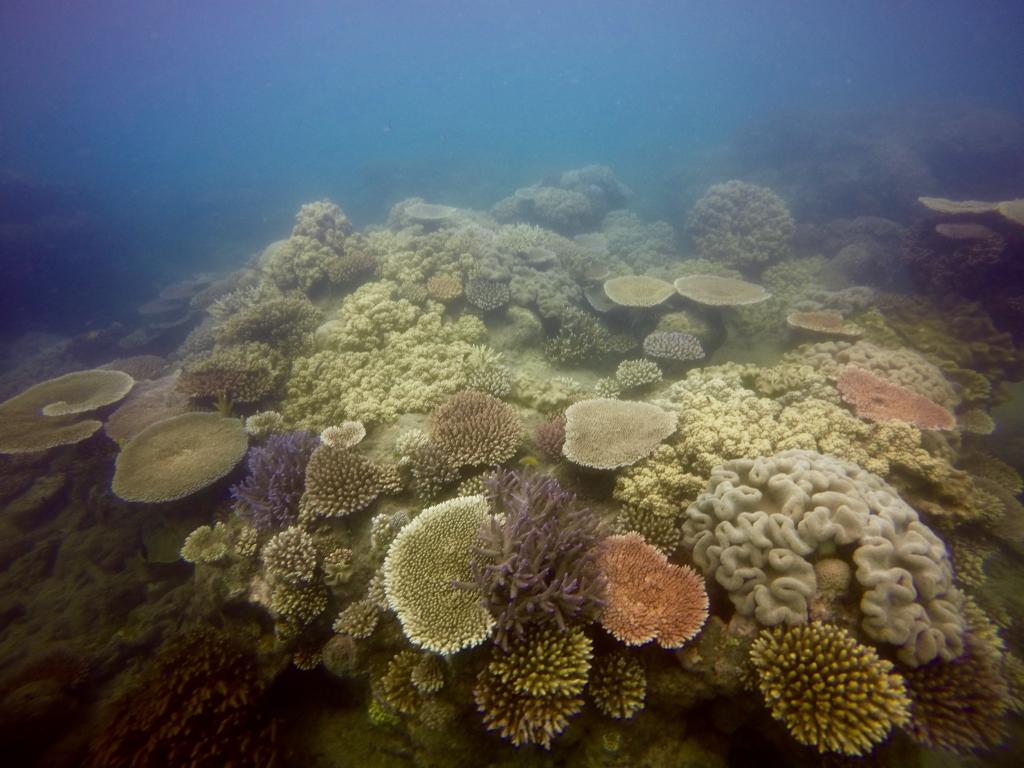 The amazing thing is that this feeling of wonder only grows every time I jump into the water at Orpheus. Every site seems more stunning than the last, and no matter how much I take in I will never be able to see it all. But despite my feeling of wonder, there are constant reminders of the changes currently affecting the Great Barrier Reef. At the very last site we sample, Mia explains that while this used to be the most pristine reef on the island, cyclone Yasi (in Australia hurricanes are called cyclones) completely destroyed the reef. Sure enough, under the water all we can see are patches of rubble. Fragments of once-living coral are strewn about and overgrown with turf algae. My data sheet is covered in zeroes. It is a startling reminder of how fragile these beautiful ecosystems are.

We start heading back to the station on this last day just in time to watch the sun set over mainland Australia. All along the coast, mountains rise abruptly from the flat inland terrain, their jagged peaks silhouetted in purple in front of an orange sky. The water around us is also violet and glassy smooth. Even though the main allure of the Great Barrier Reef undoubtedly lies below the water, there is stunning beauty above the water as well.

Because of our heavy gear, the dive boat soon drops to the back of our small fleet of research boats. Then, somebody sees a group of gulls a few hundred meters away, dive-bombing a small patch of churning waves in an otherwise flat ocean. We motor over to investigate, and discover that it’s a feeding frenzy! Tuna the size of small dogs are preying on a ball of tiny baitfish, while the gulls swoop in from above at any opportunity. We watch in awe as the tuna rush the swarming mass of fish in the middle of the churning patch, tails, fins, and even entire bodies being thrown above the surface into our line of sight. Not for the first time on this trip I feel like I’m in a David Attenborough nature special.

We sit there for maybe 20 minutes, until the tuna disperse. I am so absorbed in the spectacle that I forget bring out my camera. We eventually turn around and start heading back to the research station, knowing we will be the last to dinner on barbecue night but not really caring. Doing research was fun, but it was also exciting to be constantly reminded of why I want to become a marine biologist so badly – because of these moments of excitement and mystery about things that are still unfamiliar and strange. Although my time at James Cook University is drawing to a close, there is still so much left for me to discover. 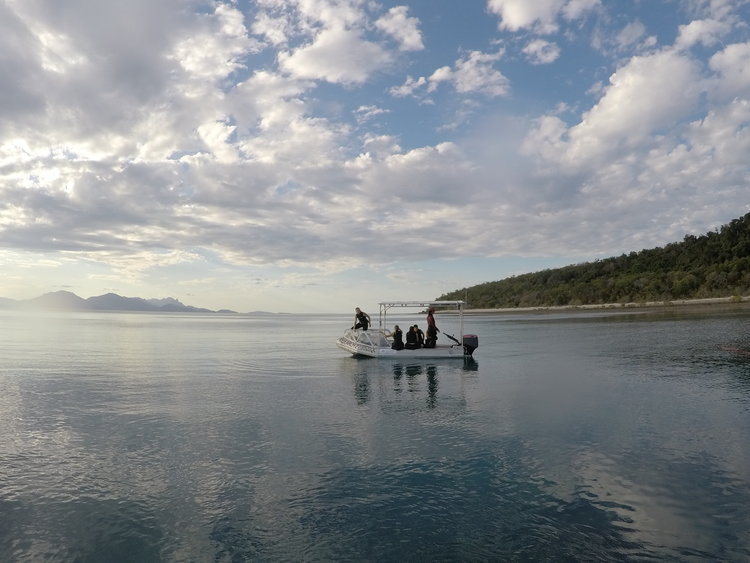