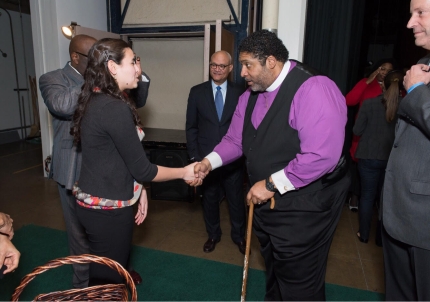 On Wednesday, February 1, 2017 (the first day of Black History Month), Rev. Dr. William Barber II came to Occidental's campus to share a message titled "Revival, Resiliency, and Redemption After Rejection," and I had the privilege of introducing him.

The professors planning the event reached out to me and said that as a Religious Studies major and as a student who participated in Campaign Semester (an awesome program at Oxy that lets student work on a political campaign and earn a semester’s worth of credit for their work) in North Carolina—the birthplace of Rev. Barber's movement—I would be the ideal person to introduce Rev. Barber.

I was shocked that my professors reached out to little ol' me to introduce the man regarded as this generation's Martin Luther King Jr., but I was so honored that they did. Naturally, I said yes to this amazing once-in-a-lifetime opportunity and started working with the professors to prepare my introductory remarks.

Fast forward about a month, and that brings us to February 1, the day of the event. That morning, I took over Occidental's Snapchat and started posting some reminders and announcements, along with some sneak peeks at what was happening behind the scenes, in order to build up excitement. (Shameless plug: add Occidental College on Snapchat if you haven't already. Username: "oxyoswald".) Anywho, after a full day of pre-event fun and anticipation, the clock struck 7 p.m. and Rev. Barber stood backstage ready to address all those present and begin his lecture.

I struggle to find the words to describe exactly what happened next, but essentially Rev. Barber took to the stage and began speaking about the importance of continuing the fight for justice, especially in light of the 2016 election. He also received an honorary degree from the College, answered questions from the audience, and worked with a woman from his staff to have the entire audience stand up and sing together about how injustice has gone on far too long. One of the final lyrics ended with the group declaring, "...and we won't be silent anymore." This group declaration that we would all act to rectify injustice struck a chord within me and made me feel hopeful for the future. More broadly, Rev. Barber's message echoed off the walls in Thorne Hall and penetrated my heart. His words calling for unity and advocating for people to work together in order to create a better America for all simultaneously brought tears to my eyes and a smile to my face. The energy level was incredible, the message was inspiring, and the sense of community I felt in the space was unsurpassed to anything I have experienced before.

But don't just take my word for it, check it out for yourself! Watch the entire event here.

What isn't seen in the video is what happened right before anyone walked on stage that night. I actually had the privilege of meeting Rev. Barber backstage in the green room. I shook his hand, introduced myself, and talked candidly with him about his work. He shared some tidbits of advice like the importance of always getting back up after being knocked down and he even signed a copy of his book for me!

Despite being embarrassed when I fumbled over my own name as I introduced myself to him, the entire experience of meeting Rev. Barber and hearing him speak was surreal. When I entered Occidental, I never imagined having an opportunity like this. Yet, after two and a half years of taking advantage of all that Oxy's liberal arts education has to offer, I found myself face to face with the one and only Rev. Dr. William Barber II. I am thankful to attend an institution that invites leaders like Rev. Barber to speak and gives students, like myself, the opportunity to engage with these role models.