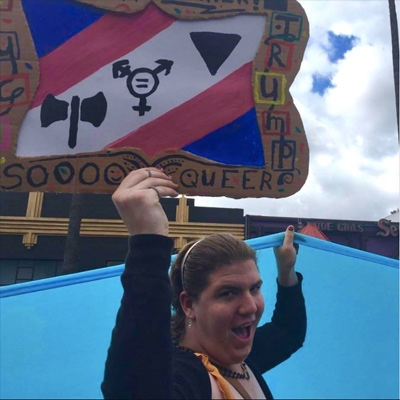 I sit here in my room on a Saturday afternoon, thankful that I was able to sleep in; it’s been awhile since I was last able to do so!

It all started on a Saturday when my dad was in town (dads do love their early morning risings) and then on Sunday was the Los Angeles Pride/Resist March. Now, normally I would leave myself one day to sleep in, but on that particular Sunday, I woke up at 6 a.m. to get ready to drive half an hour to some parking, walk a mile and a half to the parade’s beginning at Hollywood and Highland, then march for several hours to the main stage in West Hollywood. You may ask, why would I submit myself to such… effort?

Oxy has been my home for two years now, one year as a cisgender male and one as a transgender female. When I came back my sophomore year in spring having come out during my fall semester at home, I was scared about what it would be like to come back to campus with my new wardrobe and pronouns. Being a trans person in the U.S. is not easy; I’m often the subject of intense stares and whispers, people pull their children aside when they see me… a solid portion of the population thinks that I am just a mentally confused boy! But being a trans person in the Oxy community is different. People looked at me a bit longer early on when I came back (mostly because last time they saw me I was a boy) but now I’m just another individual in a community of a bunch of other wonderful and unique people! People don’t stare, people know me as she and August (as opposed to Augustus), I don’t have to try to convince people that I am a valid human female… I am treated as an equal individual. I am treated as the person who plays the older music, who revived the Queer Student Alliance, who fought hateful acts in the community, who wears a headband everyday, who now is co-founding the first club specifically for transgender students on campus; but at Oxy that could be anybody. I am taking advantage of only a handful of resources offered to me on this campus, of which there are many more. 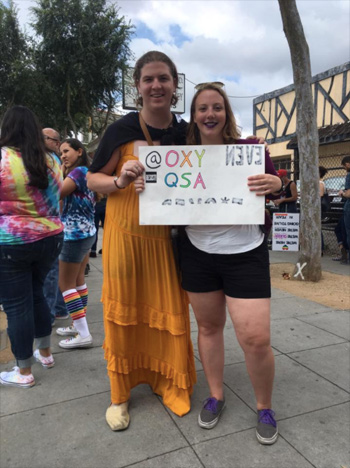 So why did I wake up at 6 a.m. on a Sunday? Because after only a semester at Occidental showing my true identity, I felt that I wanted to show the world the individual that Oxy’s community had nurtured. As president of the Queer Student Alliance I wanted to show Los Angeles that Oxy has an unabashed LGBTQIA+ community. I want to show people that I am unapologetically a Transgender Lesbian woman and that I am unafraid to fight for my rights… and so I only have one thing left to say: Watch out world, because there are a heck of a lot more fierce Tigers coming off this campus!