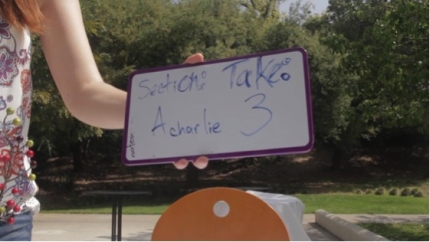 This semester I finished one of the biggest achievements of my college career; I made a movie for my Advanced (Film) Projects class.

Granted it was only five minutes long, but still. You’d be surprised how much work goes into five minutes of film.

Last January (a long sixteen weeks ago) my classmates and I started the course by writing screenplays and treatments for the projects we wanted to create and helping each other refine our ideas as we progressed from draft to draft. When I started out my idea for my project was pretty basic; a guy and a girl go on a date and the guy won’t stop texting people. But my fellow filmmakers in training helped me realize that was kind of a boring, one-sided idea. Does this guy have any redeeming qualities? Why does the girl keep putting up with him? Three drafts and several weeks later I had a subtler, ironically funny script about a couple who goes on a date and ends up bonding over the fact that neither of them will put down their phones. Each project went through a similar transformation. Sometimes topics were scrapped entirely in favor of a more intriguing idea, but in the end we all had pretty cool plans to work with.

Then came the actual filming, a lesson in the theory of whatever smart person said that thing about if it can go wrong; it will. Even my relatively simple shooting schedule with one, on-campus location and only a couple of actors had its ups and downs: boom microphones that mysteriously stopped working and my forgetting to rent equipment like a clapper board (hence the photo of me slating with a white board). But in the end we got the footage and I got to help a couple of my classmates get their footage too. I recorded sound for a couple of long nights filming a fake college party with tons of extras and manned the camera for a morning of shooting on location at Santa Monica beach. It was a whirlwind couple of weeks but it was really fun too.

So once we had our footage we were faced with editing, a daunting process but now we could see the light of the finished projects at the end of the tunnel. There were some long nights in the editing lab as we refined cuts between shots down to the perfect frame and fine-tuned the levels on our audio. It was totally worth it though when you saw the miraculous transformation each film went through from the first rough cut to the final finished product. Editing really is where the magic happens. The raw footage is like the fabric and editing is where you sew it into a gorgeous ball gown (that analogy comes from the fact that I’ve been watching too much Project Runway, sorry).

And before we knew it we’d made it; we were adding end credits and taking our precious MP4 files to our professor (who deserves a shout-out; thanks Professor Bertucci) so she had them for the final screening. I mean this in the least pretentious way possible when I say it feels cool to be a (sort of) filmmaker at your (sort of) premiere. I was pretty proud to see my work up on the big projector screen of room 117. But I wasn’t just proud of myself; I was proud of all my classmates too. We all went through a lot to get to these final projects and they all turned out really well (if I do say so myself).