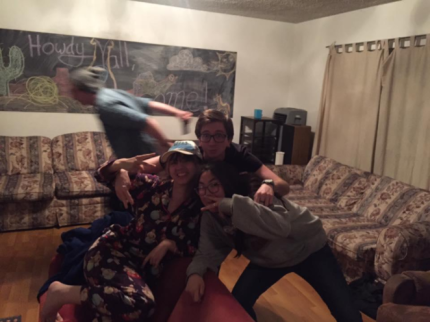 Hi everyone! My name is Claire, and I just finished my first year at Oxy.

Since the class of 2021 is about to begin their first year, I’d like to share my experience in the hopes that others can feel comfort during those first few weeks. For most, coming to Oxy, they view it as a small school. But for me, after going to a truly tiny school for seven years, Oxy was a huge place. I missed the sense of community I had, especially after a rough first semester. I knew that the best way to find a small community within Oxy’s community was to join something-- one of the many orgs or causes we have on campus. That’s when I thought about rushing for Greek life. I’ve never been a "party-er," and I didn’t want to end up in the circle of cut-throat valley girls I’d seen on TV, but everyone at Oxy said Greek life here was different. Students can’t rush until second semester freshman year, so it wasn’t until second semester that I began to consider it. After spending a week talking myself into and out of the idea at least five times, my roommate and I went to Johnson Hall to start the rush process.

Turns out, it was one of the best decisions I ever made! I pledged Zeta Tau Zeta, a tiny gender neutral (co-ed) Greek organization of the coolest nerds I’ve been lucky enough to know. I was nervous—everybody was older and cooler than me, and I wasn’t sure how they would react to a clueless freshman among them. I had nothing to worry about. They adopted me right away, and enthusiastically welcomed into their family. I got a big family of upperclassmen to ask questions, and they taught me things beyond just Zeta history—their favorite places in LA, combined knowledge about the vast opportunities at this school, and an appreciation for "Rick and Morty." They were there for me when my Grammy died and I was there through their highs and lows.
We all went to movies together, played ruthless rounds of One Night Werewolf, an amazing game of social deduction, we had countless lunches and coffees, and when one of us had a show or event we made sure they got the loudest cheer in Thorne Hall. I got the Oxy family I was hoping for, and I can’t wait to live with them in Zeta house next year.
Most people will tell you your second semester or the end of your first is when you find your people at college, and that was definitely true for me. It wasn’t hard to balance my Zeta friends with my friends outside the org--in fact they meshed together really well and just helped to expand my friend group overall. I actually befriended a lot of people outside Zeta because someone in the org knew them. That’s the thing about Oxy-- every new thing you join, you’ll meet new people and your world and Oxy community will grow! Meeting new people and making friends can be hard at first, but eventually you’ll find your own Zeta, whether it’s in Greek life or in a club, a music group, a sports team, or even a class, you’ll find your own Oxy family.