Movement, Not A Moment | Occidental College

Movement, Not A Moment 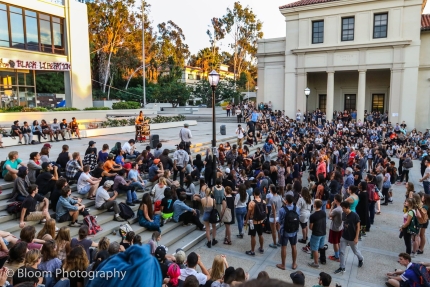 #ImpeachVeitch. Movement Not A Moment. 67 Grand Meet Our Demands. Signs bearing these slogans and more are plastered against the glass walls of the Arthur G. Coons Administrative building. Tents have been pitched outside and sleeping bags and air mattresses dominate the interior. Students lay sprawled throughout the hallways, most typing away on their laptops or chatting quietly with fellow occupants.

Occidental College has appeared on national news this past week due to the activities of the student group Oxy United for Black Liberation (OUBL).  Following a walk-out and sit-in in solidarity with other universities across the country protesting racial discrimination on college campuses, OUBL occupied the college’s administrative building and issued a list of demands to the college, including a movement to impeach college President Jonathan Veitch. Given this unrest, prospective students and parents may question whether Oxy is a good choice. However, I want to take this space to enumerate the ways in which I see the events of the past two weeks as a positive display of Oxy’s character:

1) OUBL is protesting the systematic racism that is pervasive throughout the country within the scope of this campus. This is not to say that racial prejudice is more present at Oxy than at other comparable colleges; rather, OUBL is addressing a national problem with regard to how it affects Oxy students.

3) OUBL is comprised of students of all backgrounds and races coming together in solidarity with their classmates of color. This level of solidarity, ideological cohesion, and desire for equality is an integral part of the Oxy community.

4) OUBL also shows incredible student leadership with regards to organizing and orchestrating such a large movement. Their demands are well thought out and convincingly argued. Leadership and student voice are important at Oxy, and these students were able to make their voices heard.

5) The protests have been respectfully conducted, and faculty and students not directly involved with the protests have found ways to support the movement. Whether it’s a student copying notes for a classmate who missed class due to the occupation, a professor holding class on the steps of Johnson Hall outside the administrative building in solidarity with the movement, or alumni actively voicing their support on campus and online, the Oxy community has come together in varying degrees of activism through this movement.

Race is an issue on American college campuses, and Occidental College is no different. There are a great many steps that Oxy should take to better practice diversity, as OUBL has made clear in its list of demands. However, the incredible impact of a wholly student-led movement on this campus demonstrates that Occidental is a place where students have a voice, an opportunity to create real change, and a cohesive community that supports and uplifts each other.