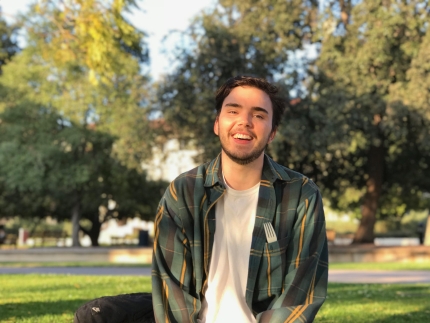 At the end of my senior year of high school, I was really set on engineering, but unfortunately I didn’t get into the school I wanted.

So I decided to go to community college and then transfer to specialize later on. It wasn’t until after I took my first engineering class at community college that I realized engineering was not for me; however it provided me a safe space to explore my interests and discover the learning environment that I thrive in. I knew that I needed a school that I felt connected to, both with faculty and with my peers. Small class sizes that facilitate close student-professor relationships was a top priority for me, so bigger state schools were less ideal for me. Access to research opportunities was another big requirement for me. Being interested in human health and potential graduate programs, research was something that I always wanted to do, but was not able to at community college. Finally, location became a bigger part of my college decision as well. The more I thought about transferring, the more I realized how beneficial the resources of a large city would be. I have always wanted to come to Los Angeles, mostly because of the beach and the weather, but, now, the resources of the city as well. When I had all of these things listed out in front of me, Oxy was the only school that checked off all my boxes and pretty quickly became my number one choice.

I was lucky enough to tour Oxy over my spring break. We were staying in Marina Del Rey (on the other side of L.A.) and one of the things I still remember when we got on campus was how quiet and peaceful it was. We had just driven 40 minutes through the heart of Downtown L.A., so to arrive to such a serene place was really special. I immediately saw Oxy as a safe haven inside the hectic city that is L.A., with a bunch of adventures both at Oxy and outside. Los Angeles is an amazing place to have an adventure, but Oxy is an even better place to come home to afterwards. I remember asking my tour guide so many questions, which I highly encourage prospective students to do, because the tour guides have so much insight about Oxy that you cannot find anywhere on the admissions website. I remember my tour guide waving and saying hi to a lot of her friends during the tour which I also really liked. It made the community seem so much closer and connected. After my stay in L.A. and my tour of Oxy, I knew it was a place that I wanted to be. I got my acceptance letter a few months later and have enjoyed every minute since then.

I had just accepted my admission offer from Oxy and everything was becoming very real. I knew absolutely no one in the entire state of California, so finding friends and feeling lonely were my biggest fears. Since I would be coming in as a junior, I thought everyone at Orientation was going to be a first-year and I thought everyone in my grade would already have their friend groups, which would leave me all by myself. However, as soon as my first Orientation event was over, I felt relieved in the best way. I was going to be absolutely fine. I distinctly remember saying at Orientation, "Hi my name’s Mitchell Johnson, I’m from Raleigh, North Carolina, I just transferred from community college and I love to wear only tie dye." I was wearing a tie dye Grateful Dead tee and I was sure that my comment would be the start of my comedy career at Oxy, but sadly my group didn’t catch on. I was 100% sure my group thought I was dumb, but ever since, these people have become my closest friends.

Oxy does a really great job accommodating transfer students and helping with the transition to Oxy by grouping Transfer Exchange and Visiting students (TEVs) together for Orientation. The members of my Orientation group were from all over the place: Wales, Australia, England and all over America. These individuals were just a few people who, though I didn’t realize it at the time, would become my best friends here at Oxy. They really eased my nerves because as soon as I heard one of them, Annis, say that she was a junior transfer I immediately felt less alone. After our first meal, Annis and I were attached at the hip for the rest of Orientation and still to this day.

Orientation promoted open, deep and meaningful conversation from the beginning, and allowed my friendships to be the same, straight from the get-go. We had a lot of seminars and activities during orientation and deep conversations were facilitated by our group’s O-team leader after each seminar. We learned about a lot of different things, but the sexual assault seminars really stood out to me as it was presented in a completely different light than what I had experienced in high school. It was mature, as well as informative and interesting. The sexual education seminars were also led by fellow students, which made the whole experience more impactful and digestible. It was really nice to have someone so similar in age and experience talking to you about these issues. Use of appropriate language is especially important at Oxy as well. A lot of the seminars and debriefs forced us to think more deeply about how our actions and rhetoric affect other people and how meaningful those things are. We also had a big TEV trip to Santa Monica which was my first official California beach trip. Needless to say, it was an awesome time. Orientation was such a refreshing way to arrive at Oxy. After driving across the country to get here, it could not have done a better job making me feel welcome and helping me make new friends. It was definitely my favorite part about getting started at Oxy, so I can’t help but hype it up!

Undergraduate research was another huge factor in my transfer decision. I’m really interested in the medical field as a biochemistry major, and upon coming to Oxy, it was nice to discover how accessible professors are to discuss and have students get involved with their research. I recently got involved in research in the biology department with Professor Okumura and am conducting research as to why a certain strain of bacteria is able to persist inside the body even after antibiotic treatment. In my opinion, the bio department is the best one on campus (not biased at all). Everybody is incredibly smart, welcoming and so good at teaching. The passion of the professors is evident in everything that they do which makes everyone involved excited about lecture, lab and research. I’ve never taken a bad class in the department or encountered a professor who wasn’t willing to talk your ear off about their projects and interests.

I started looking for research opportunities during winter break last year. My first semester was definitely an adjustment period, but afterwards I definitely felt more ready to take on some more extracurricular activities. I actually ended up emailing every professor in the department whose research I was interested in — that’s another thing, every professor’s research is super easy to access and is all up to date — and I received so many responses. I really appreciate that the professors here take the time to reply, and Professor Okumura even made the effort to invite me to her first lab meeting! Even professors who didn’t have a spot for me in their lab invited me to talk to them about their research and undergraduate research in general at Oxy. I’ve started my training for Dr. Okumura’s lab and should be ready to take part in the Summer Research Program as a full-time researcher this summer. There is so much research being done on campus spanning such a wide variety of topics. Most of the topics being explored and the techniques being utilized are comparable to that of graduate-level programs. These opportunities were impossible at community college and would have been nearly impossible if I had gone anywhere else. I’m getting really amazing lab experience which I know will be invaluable in my future field of study.

Transferring to Oxy, at first, was really terrifying. I think the school does a really great job of smoothing the transition through Orientation though. I felt so welcomed and made a really great group of friends to start my journey with. Now I’m getting really involved on campus and I can’t imagine being anywhere else. The only thing that would make my experience better would be to have been at Oxy for my first two years!