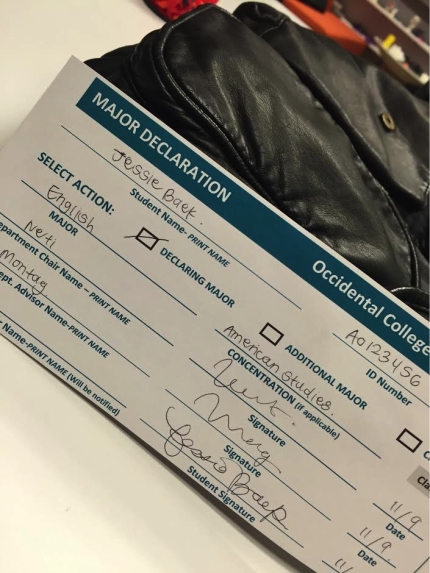 Choosing a major can seem extremely daunting in the beginning. I still vividly remember my college application process, and not knowing which major I wanted to select as my choice of study. It was a frightening experience, just because I felt as if I were committing to something that I wouldn’t want to commit to later. The truth is, though, choosing your major doesn’t have to be as scary or as baffling as I made it out to be. If you happen to know exactly what you want to major in before entering college, that’s awesome! On the flip side, if you have absolutely no idea what you want to study, I assure you, that is completely fine and normal. At Oxy, everyone enters their first year of college as an undeclared major, and are required to declare their field of study by the end of their sophomore year. This gives students four whole semesters to survey classes in a range of majors, and get a feel for what they think would be a good fit for them. I took classes from all different departments in my freshman year, including English, Music, Philosophy, Politics, and American Studies. Coming into college, I knew I had a wholehearted interest in the humanities, with a bias towards English. Despite my enthusiasm for the English major, though, I wanted to enter college with an open perspective about majors. I’ve always felt that the courses in high school were very limiting, and because of this, I wanted to open myself to the possibility of different studies. Funny for me, though, I ended up falling in love with all of the English courses that I took, and realized that I would enjoy my time at Oxy the most if I emphasized my educational career on English. Choosing your major is a personal experience, and regardless of how little or how long it takes for you to make that decision, just know that there is no "wrong" way for you to get there!