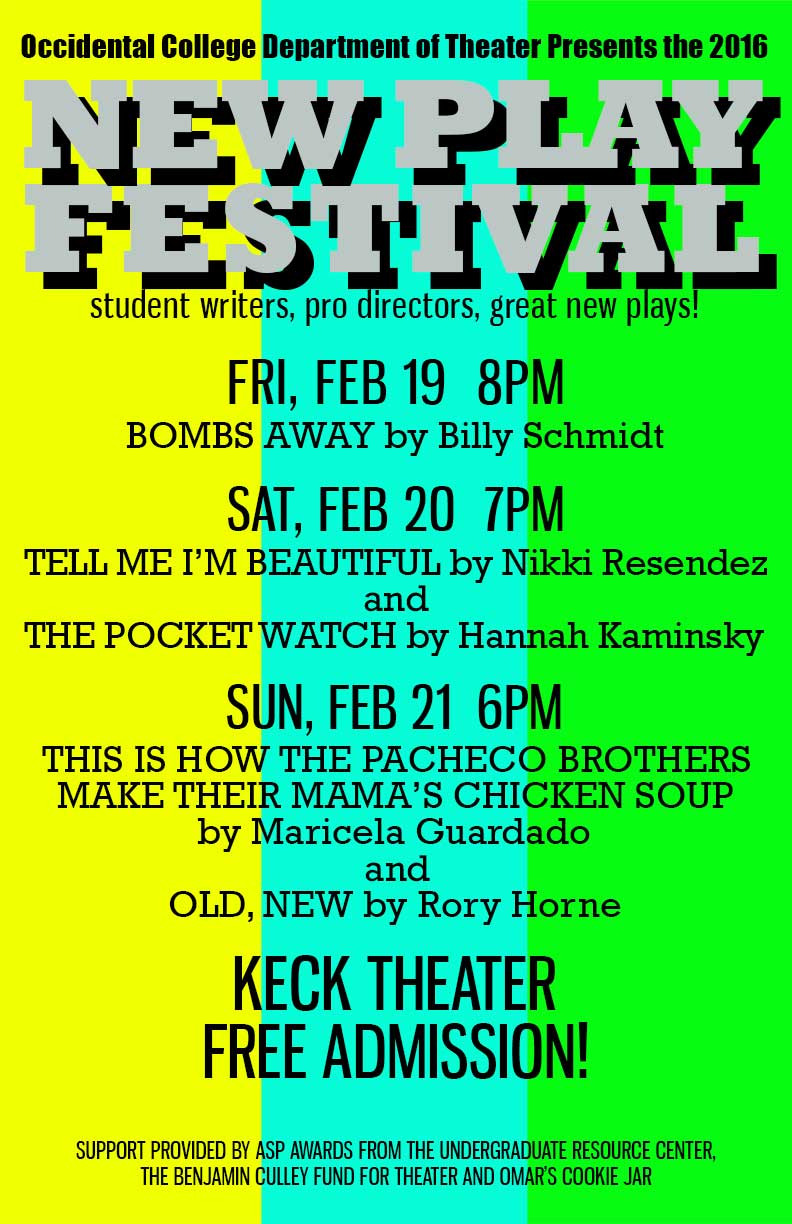 Friday, February 19 at 8pm
Bombs Away by Billy Schmidt

Sunday, February 21 at 6pm
This is How the Pacheco Brothers Make Their Mama's Chicken Soup by Maricela Guardado
Old, New by Rory Horne

Also, be sure to join us for our New Play Festival Development Day on Saturday, April 16 from 12pm-4pm in the Keck Rehearsal Studio for a public rehearsal of two new plays: Lonely Heart's Club by Tomas Dakan and Mixed Signals by Greg Feiner.

Bombs Away by Billy Schmidt

It’s just another day of Marx Brothers/Three Stooges business as usual at the Defense Security Cooperation Agency when an anarchist performance artist decides to dress up like a British diplomat to buy a bomb – two for one, over the counter, sales tax included! 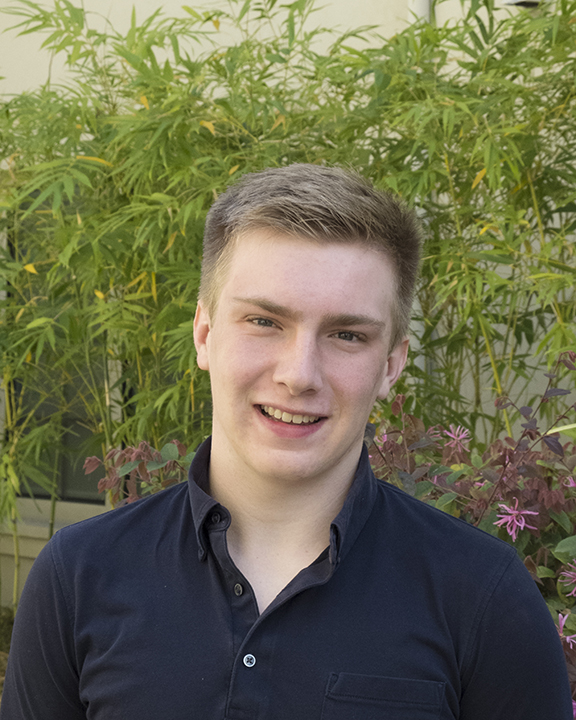 Billy Schmidt is a theater major from Cupertino, California. He got his start in theater his junior year of high school, when he was cast in an adaptation of Nikolai Gogol's The Government Inspector and it's all been downhill ever since. He's acted in few plays here at Oxy and you can see him this April in Shakespeare's Measure for Measure as Escalus. Bombs Away is his first play and won't be his last. Shout to his parents, for feeding him so he'd grow up to be big and strong.

In the course of a single act, actress Ann and novelit Michael meet, fall in love, have a full relationship and separate. It's a full-time and barely a day in this abstract, whimsical exploration of creativity and romance. How do we turn love into art, and why do they always seem to turn on each other? 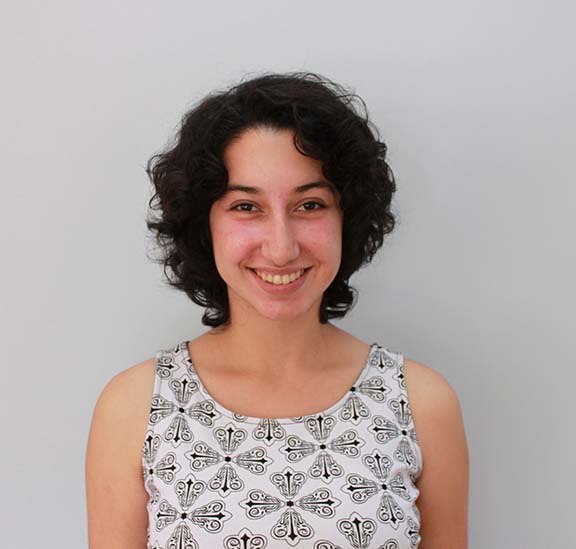 Nikki Resendez is a senior English major and Media Arts & Culture minor from Santa Cruz, California. In the past, her short fiction has been featured in Feast, Fang, and Westwind. She is grateful for the chance to experience live theater through the New Play Festival.

The Pocket Watch by Hannah Kaminsky

Chagall's America Windows at the Art Institute of Chicago are the backdrop for a poignant interaction between a woman in the midst of a rocky relationship and a Holocaust survivor old enough to be her grandfather. Their unlikely bond helps them unlock the past and confront the future.

Hannah Kaminsky is a senior Political Science major from Chicago, Illinois. Written for Professor Laural Meade’s fall Playwriting course, The Pocket Watch is Hannah’s first one-act play. Hannah is delighted and honored to be participating in the 2016 New Play Festival.

On the eve of the anniversary of their mother’s death, Kevin just wants to re-create her famous soup! But Chipster (a Chicano Hipster) Hector doesn’t eat meat, CEO Dimas won’t get off the phone and Bili… well, Bili just can’t even. Will they all finally listen when the soup starts to talk? 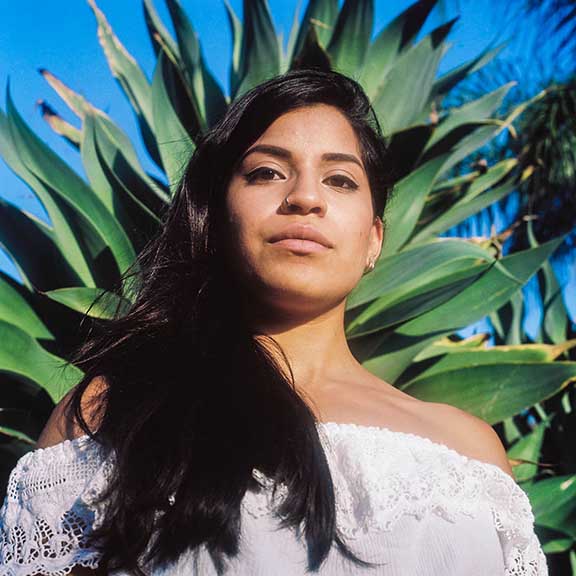 Maricela Guardado is a Los Angeles-based actress and writer. She has recently been involved in CASA 0101's production of Trio Los Machos, as well as the premieres of Josefina Lopez's productions of Hungry Woman and A Cat Named Mercy. Her past stage credits include Three Sisters, Los Vendidos,The Farnsworth Invention, The Visit, The Laramie Project, Proof, and Othello. Sin Dolor, Amá/Painless, Mother was her first one-act play, featured in New Play Festival 2015. She is enthralled to be a part of the festival again with her latest full-length play.

Cathy and Alan then, Cathy and Alan now. How could something that started so sweetly and so strongly find itself flirting with infidelity and violence? This poetic look at the beginning, middle and not-quite-end of a 40-year marriage explores the subtle nuances of love and hate, care and indifference. 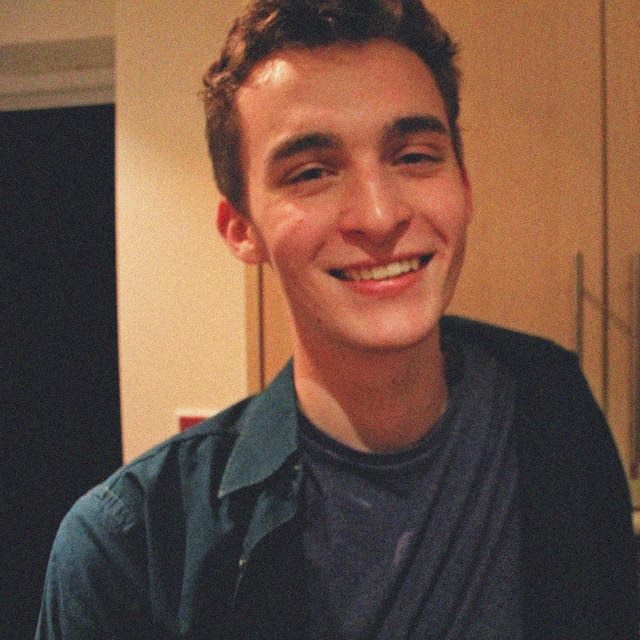 Rory Horne is a 20-year old exchange student and playwright from London, UK. He has been writing since his mid-teens and Old, New is his second full-length play. He's written numerous shorter pieces including one that was last year selected for performance at the University of East Anglia, Norwich where he studies American literature and creative writing. He has also directed,  student productions of Joe Orton's Loot and Caryl Churchill's Cloud Nine. He's very excited to be part of this year's New Play Festival and wants to thank Prof. Meade and all the students in her Playwriting class last semester for their invaluable input and feedback as he wrote this play.

Dylan Bruce '16 grew up in rural Wisconsin, and participated in community theater as an actor from a young age. After arriving in the big city of Los Angeles he found his true theater calling at Occidental College as an all around technical theater enthusiast. Since then he has worked a variety of behind-the-scenes jobs, from head flyman to sound design to assistant technical directing. Previously joining NPF as a stage manager in 2013 and 2014, and an assistant producer in 2015, Dylan is excited to be back for another year showcasing student plays.

Amanda Wagner '16 is a senior Theater Major at Occidental College. She is tremendously excited to return as assistant producer for this year's New Play Festival! This is her second time working on "the corporate side" of NPF, though she typically can be seen on the stage. Her favorite part of NPF is witnessing Something come from Nothing; the magic of a play developing before her eyes. In addition to working NPF, Amanda is cast as Lucia in Shakespeare's Measure for Measure. She would like to thank her family and friends for their support, and Laural Meade for entrusting her with the producing of NPF a second time 'round.

Support for the New Play Festival is provided in part by Academic Student Project Awards from Occidental College, the Benjamin Culley Fund for Theater, and Omar's Cookie Jar.