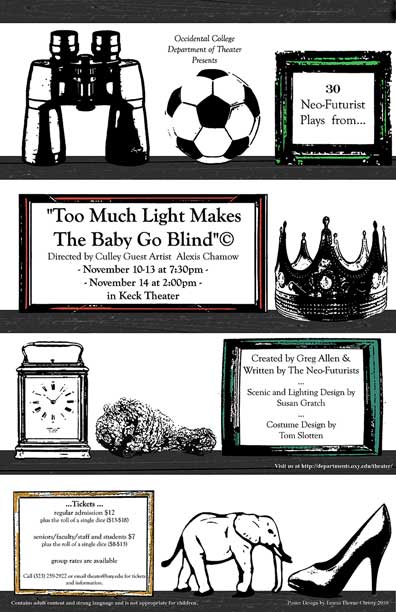 Too Much Light Makes The Baby Go Blind, 30 Plays in 60 Minutes is the brain child of Greg Allen and the Chicago-based Neo-Futurists. Part theater, part athletic event, Too Much Light… plays fast and loose with the audience-performer relationship, strengthening the absolute “live-ness" of the theatrical event. The actors have scripted, rehearsed plays and the audience has control of the order in which those plays are presented within the ever-present 60-minute deadline. Moments of chance and change are a fundamental part of the performance, ensuring both actors and audience are kept on the edge of their seats. Backstage says: “Like the glory days of Saturday Night Live, only funnier and slightly surreal," while the Washington Square news calls it: “a rejuvenating exploration of the human condition." You’ll laugh, you’ll cry, you’ll eat pizza, and you’ll be done in about an hour. 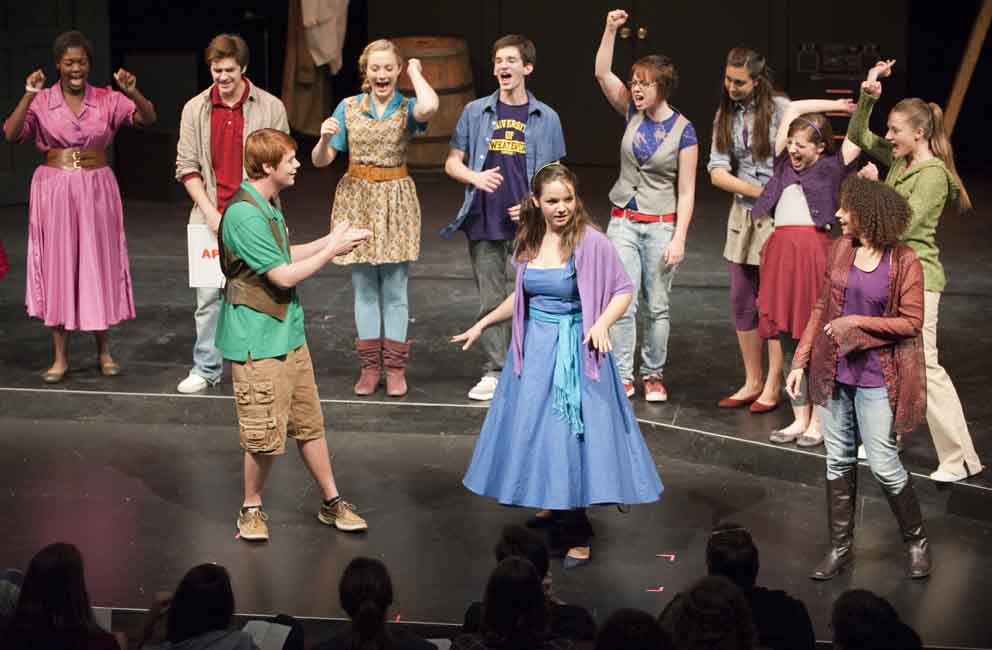 Check out our production photos on Flickr!
Too Much Light Makes The Baby Go Blind program 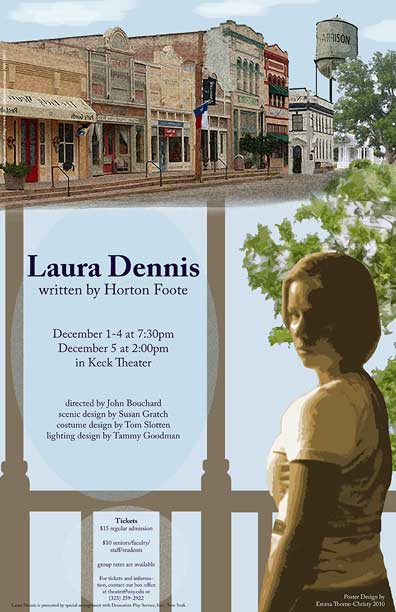 Laura Dennis is one of Horton Foote’s great historical tragicomedies that transports us to a small town in America at once idyllic and terrifying. Set in 1938 Harrison, Texas, the play spins the stories of families fractured over time by all that life has brought and will bring, with Foote’s remarkable instinct for capturing the bravery of his characters–with high school senior Laura Dennis at the heart of the tale–finding the will to confront the future. 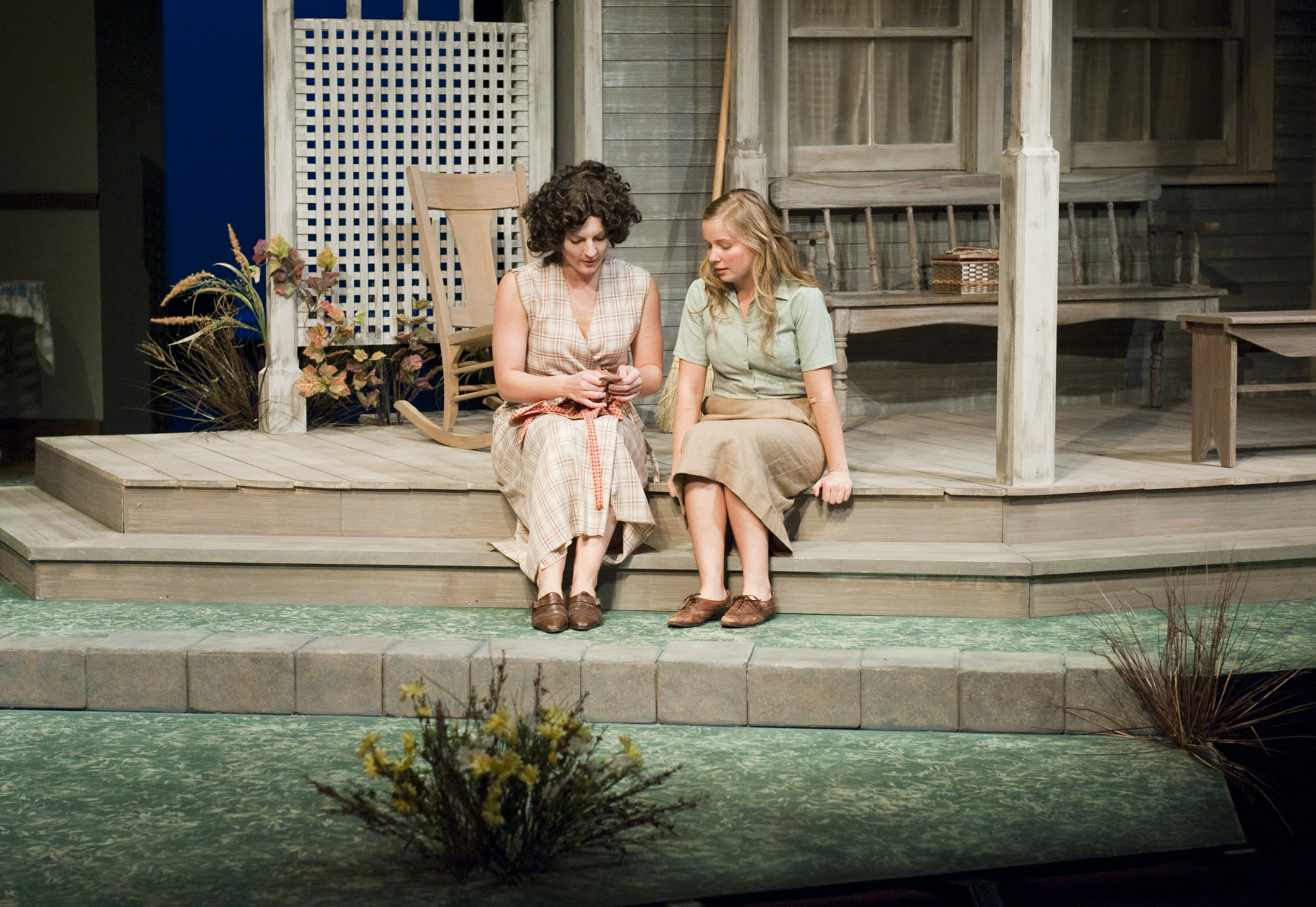 Check out our production photos on Flickr!
Laura Dennis program 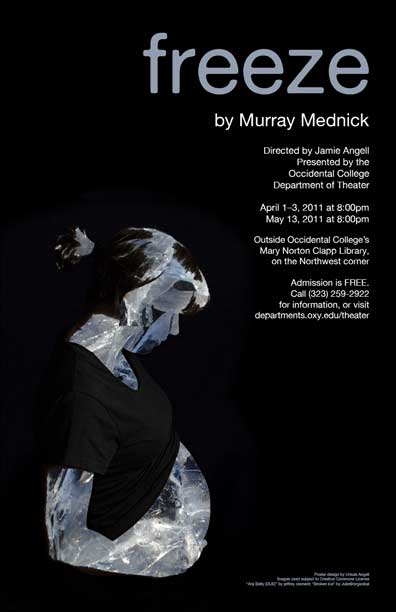 written by: Murray Mednick
directed by Jamie Angell
April 1-3 and May 13 at 8:00pm
at the Mary Norton Clapp Library – outside on the northwest corner

A young college student engulfed by the unexamined consequences of pregnancy struggles to align her religious upbringing with the decisions that implacably bear down upon her.

Playwright Murray Mednick is the founder of the Padua Hills Playwright’s Festival and Workshop, where he served as the Artistic Director from 1978-1995. Padua was perhaps the most vital laboratory for new work in S. California during that time and was noted for the site specific work it generated. This production of Murray Mednick’s Freeze seeks to capture the immediacy of that tradition by staging the play both inside and outside of the NW corner of the Mary Norton Clapp Library on the Occidental campus. The performance will begin at 8 pm, after the sun goes down and will run about an hour. Dress warmly.

Check out our production photos on Flickr!
Freeze program 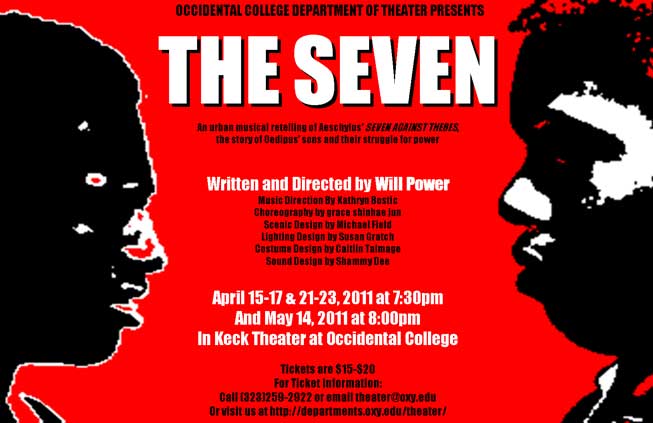 The Seven is a hip-hop adaptation of Aeschylus’ Seven Against Thebes, which follows the struggles of Eteocles and Polynices, the two sons of the cursed King Oedipus, as they fight for the throne of Thebes. This is a story of war, family, and a cursed society unsure of how to free itself. Writer and composer Will Power has taken this classical tale of pre-destination versus choice and updated it with an urban idiom to explore modern themes including poverty, race and the abuse of power. The entire script is in rhyming verse, interwoven with such musical styles as calypso, do-wop, R & B, funk, and blues. The amazing Kathryn Bostic (Musical Direction), Grace Shinhae Jun (Choreography),and a cast of 18 join Will Power to create this complex and ambitious piece that will make an old story come alive for a new generation.

The Seven is paid for in part by the G. William Hume Fellowship in the Performing Arts and the Benjamin Culley Fund 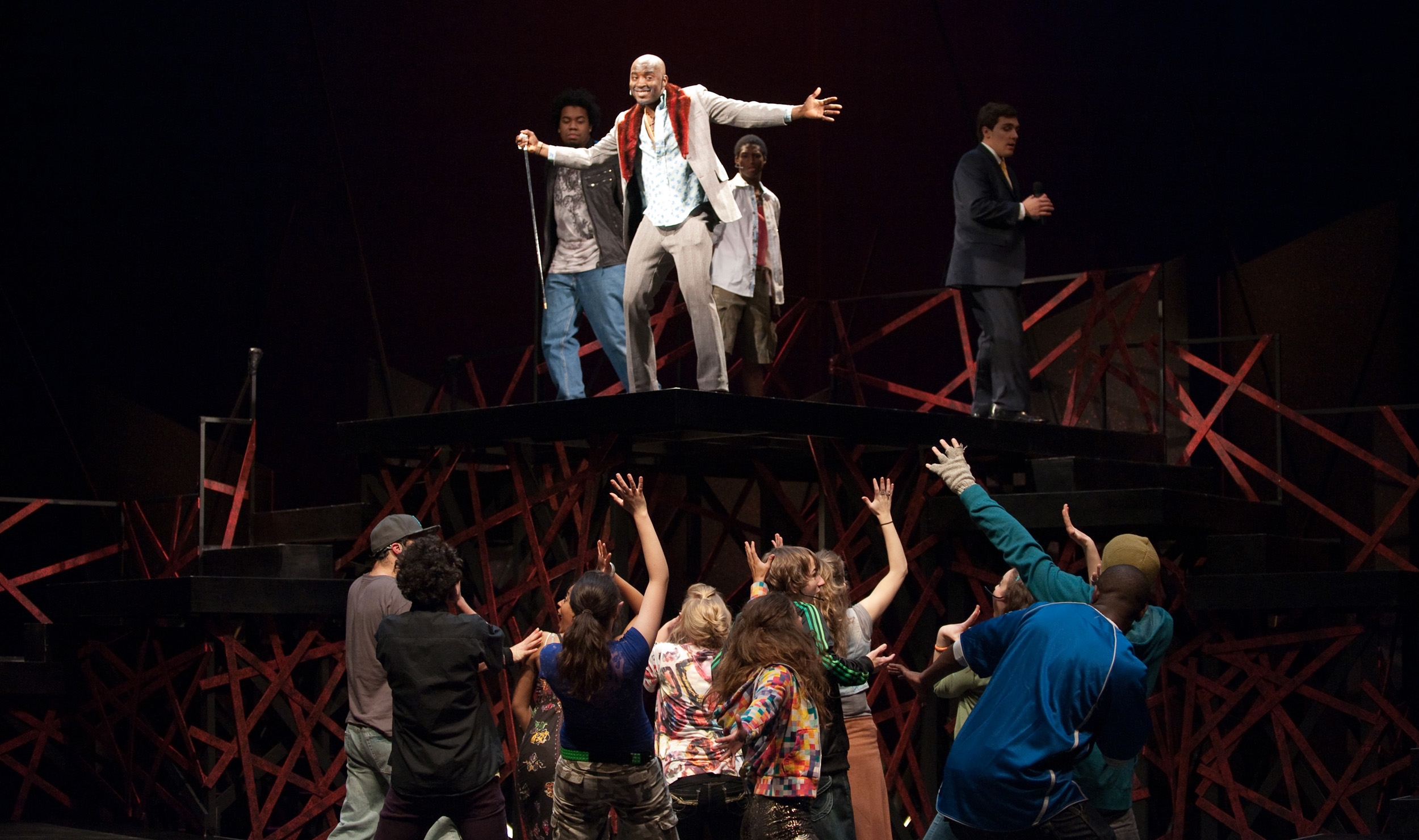 Check out our production photos on Flickr!
The Seven program

This brown bag luncheon will deal with one of the most important things an actor in LA needs to know – how to market themselves. Hollywood is all about packaging and marketing, and the more that you have a clear idea of what you are selling, the greater chance of working. David will talk about how you can fulfill your potential by understanding the part that you play in the business.

David started out working in the business as an actor. His credits include General Hospital, Days of our Lives, and The Young and Restless. In addition to numerous films, he performed in theater productions for many years. As a photographer he was able to work with the top agents and casting directors for over 20 years. He has worked with Kirsten Dunst, Sean William Scott, Allison Loman, and Scott Wolfe to name a few. His focus is on helping the actor relax, and have fun, in a creative supportive environment. 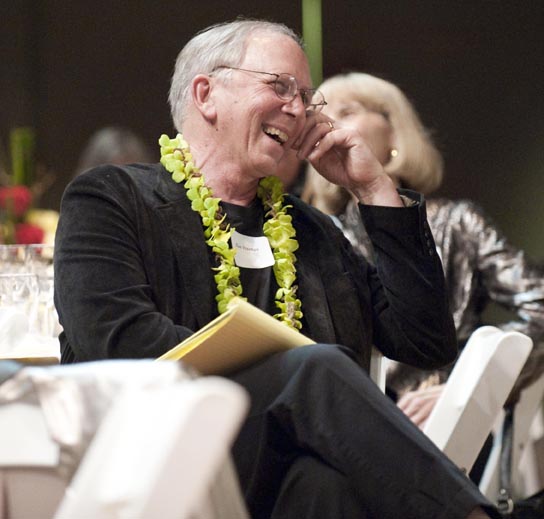 Beginning in 1960, the Occidental Summer Theater regularly produced musicals and operettas that were audience and company favorites over many years. Beginning in 1979, that tradition was incorporated on a regular basis into the production program of the Theater Department, beginning with Anything Goes.

Please join us as we celebrate Alan Freeman’s 41 years as a faculty member at Occidental College and over three decades of musicals produced by the Department of Theater — 14 directed by Alan.  In order to ensure the future production of musical theater, so closely associated with Alan over the years, the Theater Department of Occidental College is pleased to announce a fundraising event to begin a campaign to build the Freeman Fund for Musical Theater.

The Theater Department will launch the Freeman Fund campaign by hosting an afternoon and evening of events to celebrate Alan’s many achievements. 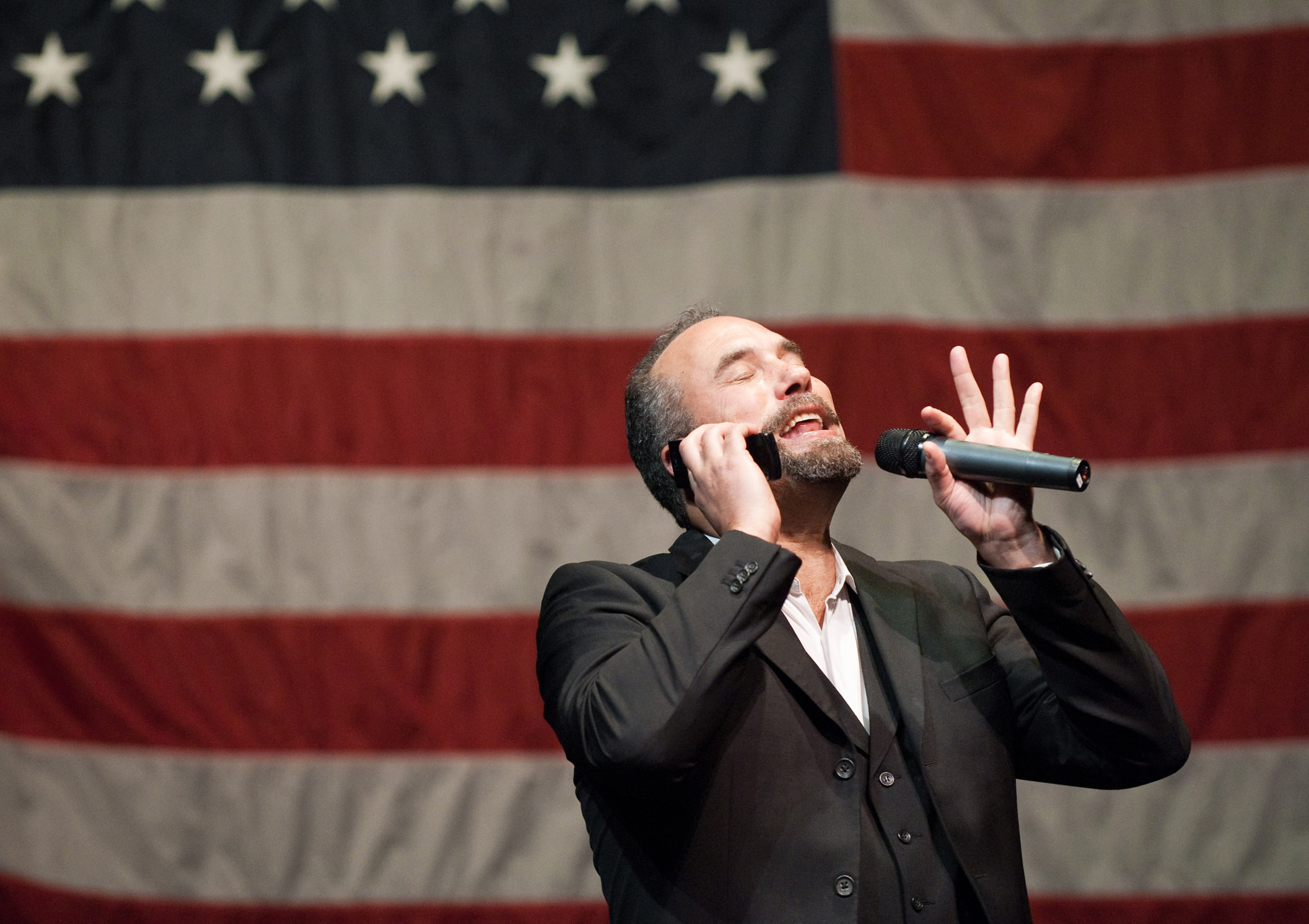 January 30-February 4
A FREE performance of Frederick Douglass Now in Keck Theater on Sunday, January 30 at 7:00pm and a performance of The Watts Towers Project in Keck Theater on Friday, February 4.
Tickets to The Watts Towers Project are free to Oxy students.
FREDERICK DOUGLASS NOW is inspired by the life and work of abolitionist and pioneering feminist Frederick Douglass. Roger Guenveur Smith bookends Douglass’ classic 19th century speeches, editorials, and letters with original narratives.
“Smith finds the echo of history in the present, then splices the reverb back into time. The concoction: a talking-history text."—The Village Voice

Do the Right Thing

directed by Spike Lee, featuring RGS as Smiley.
Film followed by a Q & A
Monday, January 31 at 7:00pm in Lower Herrick
FREE to everyone

SRGS adapted his Obie Award winning solo performance of A HUEY P. NEWTON STORY into a Peabody Award winning telefilm directed by his longtime colleague Spike Lee.
Film followed by a Q & A
Wednesday, February 2 at 8:00pm in Mosher 1
FREE to everyone

The Watts Towers Project is an intimate meditation on the nature of solo endeavor, inspired by Simon Rodia’s masterwork, 33 years in the making. Assembled from scrap materials to withstand earthquakes, riots, and civic indifference, the Towers are surveyed from the “Hollywatts" perspective of Smith’s youth.

“Smith is a master … his series of riffs on the city where he came of age has to be one of the most original theatrical experiences of the season."—The Los Angeles Times

Smith will be awarded an honorary degree immediately following the performance and a dessert reception will follow in the Keck Theater Lobby.