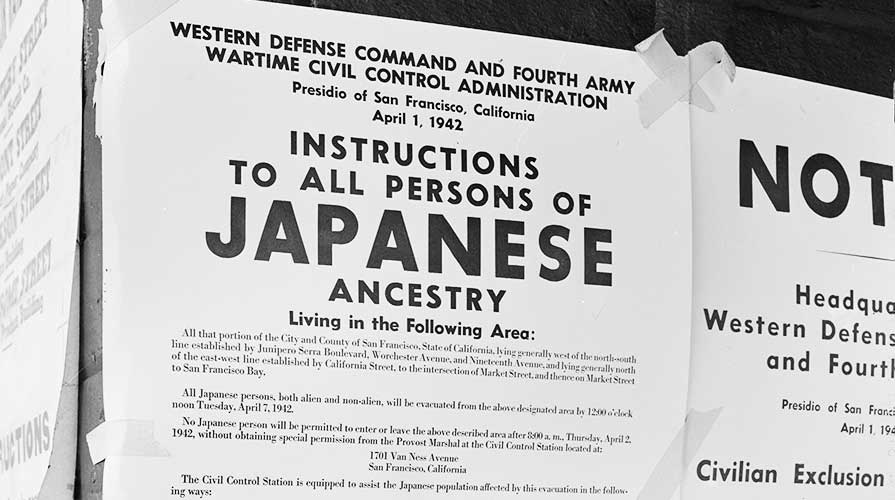 Never Again is a series of speakers, films, and exhibits to commemorate the 75th anniversary of the incarceration of Japanese-Americans during World War II.

Feb. 19, 2017, marks the anniversary of President Franklin D. Roosevelt’s signing of Executive Order 9066 in 1942, which led to the incarceration of more than 120,000 Japanese-Americans – more than two-thirds of them U.S. citizens – in 10 hastily constructed camps in California and six other states.“

Never Again" is series of events and exhibitions that will educate and provoke conversation among students, faculty, and the broader community about the impact and legacy of incarceration camps on challenges and contradictions we face today. Historical texts, expressions, and people's’ stories will be intertwined with current day narratives and perspectives about challenges such as immigrant rights, incarceration, and racism. Through an interdisciplinary approach, this series hopes to generate new thinking and raise questions about nationalism, loyalty, incarceration, immigrant rights, human and civil rights, militarism, and racism as well as the acts of resistance, organizing, and dissent. Our goal of the events and exhibitions is to ask ourselves: What would you do then? What can you do now?

In the spring of 1942, Occidental College administration, faculty and students faced the uncertainty and impact of Executive Order 9066. Six Japanese American students would be forced to leave cutting short their studies. Another four soon-to-graduate high school students who were already set to come to Oxy were likewise forced to leave the “military zone" of the Pacific Coast. Led by College President Remsen Bird (1921-1946), concerned Oxy faculty and administrators took action to support the Japanese Americans of Oxy and our region. Most notably, President Bird launched a personal campaign to transfer Oxy’s Japanese American students to other liberal arts colleges across the United States. This and other stories of Oxy civic engagement are captured in the original letters and papers preserved in the College Archives, papers collected and preserved at the request of President Bird himself. Drawing from these papers and materials, the Special Collections & College Archives is launching an exhibit in the Academic Commons and on Global Crossroads to share the impact of 9066 and the forced evacuation of members of the Occidental community.

Congressman Mark Takano "Echoes from the past: The Japanese Incarceration and Today’s Executive Orders"

"Cultivating Unity and Resistance" a workshop for mind, body and action" Tracy Ishigo and Sahar Pirzada