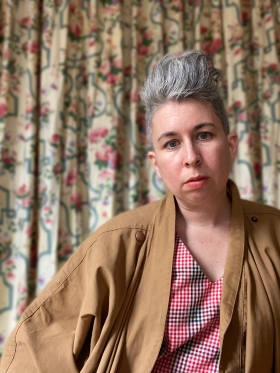 Their costume specialties include costumes that transform from one thing to another on stage, costumed folk celebrations, and subversion through clothing. Mass MOCA, the ICA in Boston, the Museum of Sex in New York City, and the Wassaic Project have all commissioned original pieces of McMillian’s artwork. For 15 years, McMillian has worked as a professional costume designer and seamstress--working for celebrity clientele, commercials and film, and performance artists. McMillian’s costumes have been featured in performances and theatrical productions at the Kitchen, Abrons Art Center, and the MOMA in New York.

Aed has worked as the Costume Designer, Costume Shop Supervisor, and Costume Instructor at the University of Montevallo and Randolph College Theater Departments. In McMillian’s courses, students learn practical skills, like sewing and pattern making, and mastery of conceptual ideas to create an expressive visual language through garments. When possible, their courses center on collaborative work for department productions. McMillian earned an MFA in Sculpture with an emphasis on Interdisciplinary Art from Hunter College in New York City. Their training in sculpture is particularly applicable to the expertise McMillian brings to the classroom--3D modeling, sculptural costuming, and costume crafts.