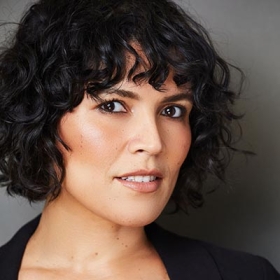 Khanisha Foster is a 2017 Fox Fellow.

Her writing, along with her life experience as being the daughter of a Black Panther father and a mother whose family invented Bubble Wrap, landed her a writing gig developing a TV series with K&L Productions (Kay Cannon  & Laverne McKinnon). She and Julie Hébert (The Man in the High Castle) are adapting a Philip K. Dick novel with Electric Shepherd Productions. Her series Sancho was a semifinalist at the Austin Film Festival and is being produced by Max Arciniega (Breaking Bad/Better Call Saul) and Alonso Alvarez (Snowfall). Foster has written video games for Probably Monsters, the company founded by the creators of Halo and Destiny, and for Episodes. Her solo show Joy Rebel, directed by Obie Award winner Lou Bellamy, received critical acclaim and was chosen as a DC Metro Staff favorite for 2019. Her plays have been commissioned by Penumbra Theatre, 1st Stage, and 2nd Story.

Foster was a featured storyteller on NPR’s The Dinner Party. Along with Lena Waithe, she was named one of 18 Black Women We Think Are Phenomenal by Mater Mea Magazine. American Theatre Magazine named her in their Role Call series as one of the 6 Theatre Workers You Should Know. Broadway World named her Best Director for The Bluest Eye, which also won Best Production. Her film acting debut, Chicago Boricua, was an official selection of the Tribeca Film Festival. The Star Tribune called her writing “…risible and heartbreaking…”, the Compendium said she “…oozes charisma and charm, blinking in an instant between tremendous sadness and effervescent joy.” They added that her writing is “…lush and descriptive bearing hallmarks of Roxanne Gay, Lindy West, and Tracy K. Smith”, and the D.C. Metro said her work “comes from the rebellious joy of making others laugh so their days are not so dark. So they and anyone can enjoy laughter.”

If you you’d like to enjoy a laugh, be sure to ask her about that time she broke onto the Queen of England’s land and got shot at, or when her sister — who is a legit Nigerian princess — showed up in Lagos two days late for her crowning ceremony, or about how she almost became a professional clown.